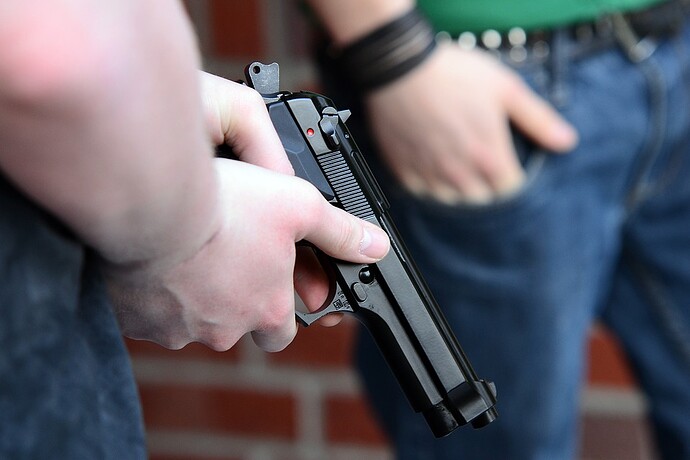 A female Lyft driver was fired by the rideshare company earlier this month after using her legally-owned firearm to defend herself during a violent attack. Cynthia Norman said she picked up two men in their 20s in Cleveland’s Nottingham neighborhood...

This is the same boat that many of us are in when we’re not working from home. We are allowed no weapons at all, and I normally take the light rail in and out of the city. One boards it from near the transit center where one could get any drugs they want any time they want. These aren’t the best people to be around alone at night.

I remember a similar case years ago, when a pizza driver was robbed and he used a firearm to stop his attacker.

I don’t know if the Lyft driver can put a legal case together. I would like to think that society could put some pressure on them, asking why their woke policy is more important than their drivers’ lives. They really are making a statement that the driver should have died. Unfortunately, 2A supporters aren’t usually that assertive. Gun owners tend to be too polite to band together for issues like this.

What a scary thing for drivers, that they have to pick up strangers and are forbidden any form of defense should the ride go sideways. What’s it like to work for a company that puts absolutely zero value on their people?

Zero value! That is a very eye opening way of putting it. But, that just about covers it, doesn’t it?

Easy answer for all of us on here…don’t do business with Lyft. The biggest wat to get their attention is through the wallet.

Hi friends. Any one know if we as CCL passengers/customers, are allowed to CCW inside an Uber or Lyft?

Unrelated, but another writer on this board mentioned their traveling via public transit. One year I worked the third shift downtown inner city, and would take a bus and an elevated train/subway to work nightly around 11PM. In the city where I reside/work, the law does not allow CCW on public transit. I CCW where I can. On my own “honey do list”, is … to relocate.

Unfortunately, 2A supporters aren’t usually that assertive. Gun owners tend to be too polite to band together for issues like this.

You mean like forming a militia (armed neighborhood watch, for example…which is the historical origin of the word vigilante)?

No, I mean that armed groups of people tend to be polite. Gun owners don’t typically scream at strangers or participate in cancel culture type activities. We aren’t out to destroy people, like the online mobs do. So companies like Lyft will bow to the pressure of the anti-2A crowd, because they’re the side making all the noise.

Lyft and Uber drivers are contractors, not employees. Does not make it right. Oh heck, how many of us live in “At Will” employment States?

After decades of working in bad places, at bad time, I am happily working at home in a decent place.

Same basic principle underlying both issues. The question becomes whether you want to be effective or idealogically pure? I never did like hurting people’s feelings, much less calling in a precision air strike on them. But…when folks were shooting at us, the latter was a LOT more effective at making them stop than dropping love notes from a C-130. The discernment to know WHEN to flip that switch – that’s the hard part.

I’m reminded of a quote from Blackhawk Down. “Once that first round flies past your head, politics go right out the window.”

Lyft’s actions depend on a lot of “what if’s.” What I mean by that is I have never been a lyft driver, nor have I ever used their services. That is relevant because that means I have no idea what kind of agreement the driver entered into with Lyft. It is quite possible that she entered into an agreement that she agreed to no firearms/weapons, thus meaning she was fired for violating the terms of her contract. That is the fact, regardless of the emotion or circumstance that led Lyft to become aware of the fact that you had your EDC on you. And I get it, these forms of corporate gun control pose a very real threat to our rights, and one could also make the argument that perhaps the perpetrators targeted her because of the Lyft policy, assuming one is in place, similar to how shooters target gun-free zones. One could also make the argument that if they were denying the driver the right to protect herself, then the company has a responsibility to provide the security that the employee is unable to provide to themselves. But again, she entered into the employment agreement on her own free will.

I will say it is much better for her to have violated company policy and only come away with loosing her job than to still have her job, but to have lost her life or been forced to endure something unspeakable.

I will end with this. Yes, I have my outrage, and I am fortunate enough that I can and do carry at work. But if you searched this forum, how many discussions and comments are there related to people’s ability/inability to carry at work and if the risk of losing your job if found out is worth it? I seem to remember just last week was a member who was in a situation where he worked in a public school and lived in an area where a shooting spree was going on and the vulnerability he felt. He was in a situation that he couldn’t even bring his EDC to work and leave it in his vehicle as so many of us have done and do when we cant carry at work. So, corporate gun control has to be addressed, and it can only be addressed by dialog between a business and its employees and customers. Perhaps the tide of corporate gun control can start to turn with all the new gun owners out there, and I have some ideas, but that is beyond the scope of this thread.

I will say it is much better for her to have violated company policy and only come away with loosing her job than to still have her job, but to have lost her life or been forced to endure something unspeakable.

Excellent post from start to finish! But the above quote summarizes my sentiments on this issue perfectly. We make our choices and live with the consequences of them. There are a whole lot of less than ideal choices all of us make in life. The future is all probability. That means there will always be winners and losers who made all the right choices, worked both smart and hard, and just came up short on the luck factor at a bad spot on the space-time continuum through no fault of their own. Wild success is the exact same thing on the opposite end of the luck scale. Right place + right time + doing the right things when fate does you a huge favor. We win some and we lose some. I think she did the right things. I’ll bet she gets another better job PDQ.

First, she’s alive. That trumps all other concerns. Kudos to her for defending herself.

Second, Lyft reserves the right to set policies. My employer doesn’t allow firearms either. So at the end of the day, the choice lies with us.

Third, I question her judgment, period. A female picking up male passengers at 1:00 a.m.? Not smart.

Fourth, have they caught the perps? A Lyft has to be scheduled with an app on a phone. Seems to be a pretty straightforward process to catch these miscreants.

Third, I question her judgment, period. A female picking up male passengers at 1:00 a.m.? Not smart.

I understand your point, but no woman should have to decline a paycheck because a company has a daft rule prohibiting self defense. Colt made us equals. Some enterprising lawyer should put together a case which states that since Lyft denies their drivers the right to defend themselves, then Lyft is 100% responsible for any damage done to drivers property and person, whether from Lyft users or bystanders who take advantage of the “Gun Free Zone” advertised by that Lyft light in the windshield.

@Quade5, agree 100% with your point. I would love to hear @MikeBKY chime in. I’m sure lawyers don’t regularly pursue such cases because legal precedent has been set.

And I offer my apology to ALL women reading the post. I apply this same standard to myself. I try not to be out and about after midnight, armed or not. I try not to put myself in situations where I would need to use my weapon.

The Bill of Rights protects a persons rights from being violated by the government or a person acting under the color of law. It does not generally protect persons from not allowing others to exercise those same rights.
You can only speak, pray, carry a weapon, not be searched, etc. in my house if I allow it.
With the exception of discriminating against certain classifications of people with respect to public accommodations, businesses can prohibit workers, contractors and customers from exercising most rights while working or on the premises.
If Lyft prohibited women but not men from carrying a firearm, that would be a problem. But if it is an outright prohibition, they are within their rights.

Both Uber and Lyft prohibit drivers and passengers from carrying firearms.

@MikeBKY is correct, employers can impose restrictions on all things that we consider our “rights” as a condition of employment. There are some states, VA most recently, that have adjudicated that in a company offered parking lot for employees that the right to keep a firearm in a private vehicle is legal on that lot as it is open to the public and the employees. Truth be told companies can say “NO firearms” and as an employee you are bound to the rules of your contract. Don’t like it, leave, or face the consequences. It doesen’t matter that your private property is used to conduct the business of Lyft or Uber as a 1099 or a W2 employee you acknowledge and give up your rights while acting as an employee.

Now here is an interesting question, as a W2 employee in a company that says no firearms on company property and you are working from home (Due to COVID) is that considered company “property” if you are “on the clock”?

Are you aware of any cases where a person (employee or customer) was robbed, injured, or killed and was able to sue a “no firearms” company for liability?

My guess is no, since there are so many companies that do it.

But if it is an outright prohibition, they are within their rights.

Yes but…it would not stop bad guys from carrying them anyway.