Will TSA confiscate a Tactical Pen?

Ordered a Tactical Pen and traveling soon. Will TSA confiscate it if it is on me at check-in?

You’re allowed to bring small, non-threating, sharp objects, so you should be able to take them but they’ll confiscate a screwdriver so it might be risky!

Don’t take it in carry on luggage. It’s risky.
You will have to relay on TSA officer and they are not risking at all.
The tools that you can carry with you on board must me shorter than your ID.

Only one way to find out

My guess is that they are supposed to take it and you probably aren’t supposed to carry it on.

Will TSA confiscate it if it is on me at check-in?

If the TSA guy on the luggage X-Ray screen recognizes it as a tactical pen and not a simple ballpoint, then yes. I would not depend on the level of ignorance of those folks. Checked luggage for it would be my call.

p.s. They have been known to let knitting needles through… WOW.

True story - I had one confiscated at Bradley Airport in Hartford, CT a few years ago. It was in my carry on backpack. The TSA Agent said they recently had training on tactical pens so he knew what it was. Since then, I still carry the same tactical pen, but now I take the cap off and put it on the back end of the pen so that to the X-ray machine, it looks like an ordinary pen. I’ve been through airports several times since then (Hartford/Atlanta/Minneapolis/Honolulu) and no issues.

No, if they notice it, they will take it. That said, my wife carried a pocket knife in her pocket book for many years, until one trip they found it.

These are very realistic and do not have the “tactical pen” look. 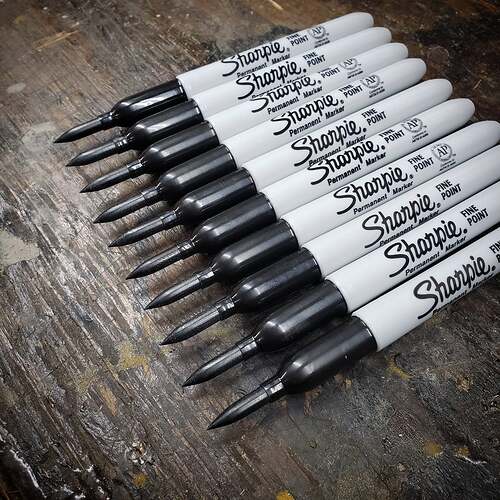 Tactical Sharpies are a perfect addition to your edc gear. Sharpie is gutted out and replaced with a G10 or Hardened steel rod that obtains a...

do not have the “tactical pen” look.

For visual inspection yes, but what about on x-ray?

For visual inspection yes, but what about on x-ray?

I do not know. They are not metal, so it is more likely, but I don’t try to get things past TSA, so not my dog, not my fight.

You could call the airport security office and your airline carrier, but you are still subject to the opinion of whoever is working security on the day. Follow earlier advice - put it in you checked luggage. BTW - you can get tactical pens with a metal cap over the spike. Solves the x-ray problem.

They are not metal,

But the linked article said,

MIssed that! I am not sure I would trust the plastic Sharpie to hold up if I needed to use it.

G10 is not metal, though it would likely be noticeable in an x-ray.

@Larry130, G10 is very resilient, it’s what knife and pistol handles are made of.

I’d put the pen in my checked bags.

TSA allowed, then confiscated my souvenir Yellowstone pocket knife with a buffalo etched on the fake ivory sides. You know, the tactical version with a 1 1/4" blade and sizzors (that can’t cut anything). Keepin’ us safe.

Going to Australia the Sunday after September 11. LAX confiscated three nail clippers in my checked bag, camera bag and in my toiletries in the checked bag–We then got metal silverware for the meals on a 14 hr. flight.

I’ve had a metal spoon in my camera bag since 1974. In the 80’s I added an Opinel knife and and kept it in the same orientation for 20 yrs. and many international flights. But I put it in my checked bag now and will do the same with my new Tactical Pen.
Thanks for the comments everyone.

My brother uses his day hiking bag as his carry on bag and has forgotten to pull his pocket knife out of it on several occasions when flying without TSA realizing it. Including the time they confiscated his nail clippers but didn’t notice the knife.

I feel so much safer with TSA on the job:/

Just watched the National Geographic’s program on the planning of 9/11. A member of the Red Team, FAA security undercover, said during that time period they were able to take “weapons” thru security 90% of the time with no challenges what so ever.