Why "shooting them in the leg" is a HORRIBLE IDEA

So I have been paying very close attention to what is going on in politics, as we all should be. It seems that non-gun owners and people who don’t know anything about firearms, believe that if someone is attacking you and your life is in danger, you should just shoot them in the leg. Now I’m sure we are all aware of why this is a horrible idea, but if you ever find yourself in a conversation with someone who doesn’t know what they are talking about, here are a few key points to why this idea SUCKS.

It never hurts to arm yourself with knowledge, hopefully this will help you guys to educate someone else! 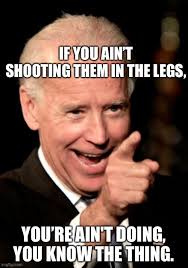 EXACTLY, just use that double barrel shot gun and give them two blasts!!

Do you remember this classic?

If a person shows up with a gun and knife at close range definitely the cops would have to shoot them in the body area, otherwise if it’s at distance, it would be nice to use scatter gunshot in the leg to disable the situations. 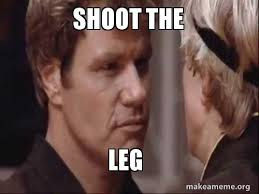 I thought we were supposed to blindly fire twice in the air?

It never hurts to arm yourself with knowledge, hopefully this will help you guys to educate someone else!

I would also add that shooting someone, no matter where you hit them is always going to be considered lethal force. If you want to “less lethal” them, you need a totally different tool.

If the bad guy has a firearm a shot in the leg does not end the threat. I have never seen anyone fire a gun with their legs.

Remember though, use a shotgun because people do not need AR 14s.

Ah yes, those fully semi-automatic assault weapons. Unfortunately, I lost mine, along with all of my 30 “clip magazines”, in a boating accident.

There are some strange answers here to a straightforward question. Here in Michigan, if you are in fear for your life, hence the only need to draw your handgun, you should be shooting to stop the threat, in the center of mass (cardiovascular triangle). If you are take to court and trying to get the jury that you were in fear for your life, but only wanted to slow them down by aiming for a narrow, moving target that will NOT likely stop the threat…food for thought.

You would never see my knives until it was too late.