Who Was Paladin? What Did His Name Mean?

Of all the TV westerns I grew up watching in the '50s. Have Gun - Will Travel was my favorite , next to Rawhide & Maverick. The opening theme was written by the famous movie composer Bernard Herrmann, and was distinctly different from the others. My dad just thought he was just another gunslinger, and I had never heard or read the word “mercenary”.

Paladin seems to have an ancient meaning - Paladin - Wikipedia.

Paladin seems to have an ancient meaning

This “old” thread came up as suggested!

Makes sense, as I remember his business card had a chess Knight on it! 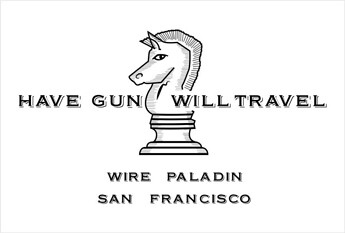 Paladin was also a favorite of mine. I also had a Paladin six-shooter with a derringer hidden behind the holster. Tho’t I was the coolest kid on the block!

A “paladin’” was a knight who owed no particular loyalty to anyone - he could be a knight-errant, a mercenary, or a “free-lancer”. In “Have Gun - Will Travel”, Richard Boone’s character had been a Civil War veteran - a major - who had to resign under false charges. Rather than become an embarrassment to his family, he moved West and changed his name - from his comfortable headquarters in the Carlton Hotel, Paladin became a mercenary, using his wits, fists, and weapons to complete the missions he charged large sums for - usually $1k, a helluva lot of money in he 1800s. I’ve envisioned a film to bring this character back, but you can bet it won’t be made in my lifetime. FYI

Paladin has my favorite Western radio show, but I did finally watch an episode of the TV show on Youtube. I like the radio show better, but the TV show was good too.

I did really like the part where to be quick, Paladin is going to just buy some pre-made bullets, and the guy who custom crafts his cartridges says “It’s your life.”

Paladin did not buy the ready-mades.