The Legality of Concealed Rifles

I recently met a local rangemaster who mentioned he had legally assembled a folding SBR that could fit in a pack for concealment while hiking. I’m familiar with New Mexico law, where concealment of a firearm other than a handgun is illegal, but I’ve found it difficult to find precise information on the topic in other states. What are the laws in other states on concealing firearms other than handguns, particularly in constitutional carry states?

Edit: I understand forum comments don’t constitute appropriate legal advice, but I appreciate the temperature check, so to speak.

Welcome to the family brother @TheBlueLabcoat , glad you could join us.

Tennessee is somewhat a constitutional state and I believe permits here only cover handguns.

I just read the same wording you posted for kansas as well. Only handguns.

I do not think I seen any state which covers the concealment of a rifle, I guess it is because they look at any weapon that is within a certain length and have a fixed stock a rifle, just guessing.

Welcome to the community @TheBlueLabcoat

I believe that Arizona refers to the right to conceal a firearm either through its constitutional carry provisions or licensing laws. They don’t seem to make a distinction between a rifle and a pistol. Though I can find no specific confirmation that concealing a rifle is allowed.

Open carrying a rifle is definitely allowed but not advised in many settings if you don’t want to draw some unwanted attention given recent events.

Noted nothing specific regarding rifles in CT, only pistols and revolvers, open or concealed carry. I did read some commentary on “no one getting arrested open carrying a rifle, but…”
CT doesn’t allow folding or collapsible stocks on semi-auto guns, but does allow a few “take-down” guns that I’m aware of, Ruger PC9 and Diamondback Transporter in the “CT other” configuration (collapsible brace/12"barrel/VFG), technically not a rifle.

I wouldn’t have thought twice about putting this in a backpack before this thread. 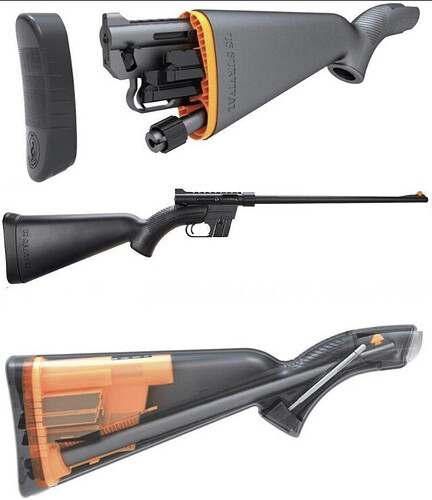 What is the rifle in this picture? Back in the late 80s I had a .22 made by Charter Arms that was very similar to this. This one appears modern in comparison but very similar. Somehow I lost the thing a long time ago

I wouldn’t have thought twice about putting this in a backpack before this thread.

Hmmm like the Henry survival rifle or the Ruger 10/22 takedown rifle.

What is the rifle in this picture

So, is having a rifle or shotgun in a case considered concealed?

In AZ the law is as follows for 18-20 year olds but sounds like 21 and older have no restrictions unless they are in a restricted area:

“For citizens 18-20 years old, the law is different. It is unlawful to carry a firearm concealed within the immediate control of any person in or on a means of transportation if under 21 years of age. Firearms carried in a vehicle shall be transported in a case, a holster or scabbard, a storage compartment, trunk, pack, luggage, or glove compartment of a means of transportation.“

“A.R.S. §13-3102 permits citizens 18-20 years old to store a firearm in a vehicle provided the firearm is inside a case, holster, scabbard, pack or luggage, or is located within a storage compartment, map pocket, trunk or glove compartment. Additionally, if the firearm is in a holster, it can be concealed anywhere in the vehicle without violating the law. This does not permit the 18-20 year old to conceal an unholstered gun underneath his seat. Citizens 18-20 years old may openly carry a loaded firearm on their person while inside their vehicle provided that the firearm or holster in which the firearm is carried is visible.”

I have researched this in the past, specifically for Virginia, but not other states. I personally do like the idea of having a backpack gun (generally an AR) and/or truck gun that goes with you in a backpack. Obviously, other things have to be taken into consideration as well in terms of if you would ever have to leave that backpack in your vehicle or if it could always be with you. Below is the statute specific to VA, I am most definitely not a lawyer but from my understanding of what it says at the end “anyone having a valid concealed handgun permit” is exempt from the law that otherwise wouldn’t allow this.

It shall be unlawful for any person to carry a loaded (a) semi-automatic center-fire rifle or pistol that expels single or multiple projectiles by action of an explosion of a combustible material and is equipped at the time of the offense with a magazine that will hold more than 20 rounds of ammunition or designed by the manufacturer to accommodate a silencer or equipped with a folding stock or (b) shotgun with a magazine that will hold more than seven rounds of the longest ammunition for which it is chambered on or about his person on any public street, road, alley, sidewalk, public right-of-way, or in any public park or any other place of whatever nature that is open to the public in the Cities of Alexandria, Chesapeake, Fairfax, Falls Church, Newport News, Norfolk, Richmond, or Virginia Beach or in the Counties of Arlington, Fairfax, Henrico, Loudoun, or Prince William.

The provisions of this section shall not apply to law-enforcement officers, licensed security guards, military personnel in the performance of their lawful duties, or any person having a valid concealed handgun permit or to any person actually engaged in lawful hunting or lawful recreational shooting activities at an established shooting range or shooting contest. Any person violating the provisions of this section shall be guilty of a Class 1 misdemeanor.

This is one of those things that is going to be different depending on the specific state.