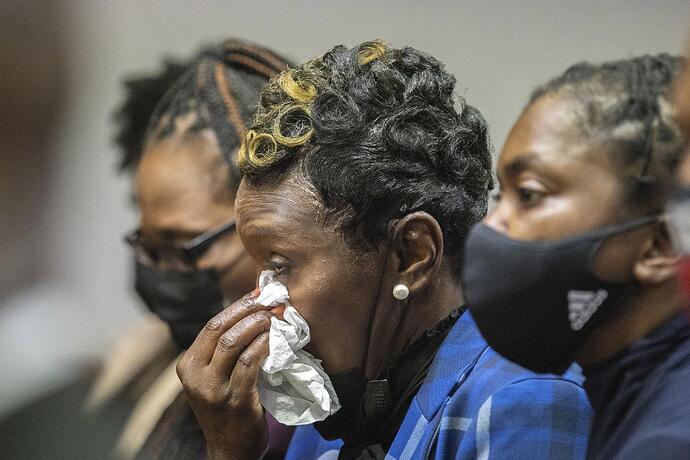 Arbery killers get life in prison; no parole for father, son | AP News

BRUNSWICK, Ga. (AP) — Three white men convicted of murder for chasing and killing Ahmaud Arbery were sentenced to life in prison Friday, with a judge denying any chance of parole for the father and son who armed themselves and initiated the deadly...

Our justice system really can be impartial, as it should be. These guys gunned down a guy who did nothing wrong.

I think they got it right. Maybe a little stiff for Mr. Bryan, he was just an observer but all in all nothing less than one would expect.

Maybe a little stiff for Mr. Bryan, he was just an observer

Yeah, I’m curious about that. The article I read said he was unarmed, but he was convicted of murder? Makes me wonder what the jury heard that didn’t get reported.

I’m also willing to accept that the news misreported. That seems all too common.

These guys gunned down a guy who did nothing wrong.

The video of the event, and even the one posted here, clearly show the decedent attacking the man armed with the shotgun. He ran around the truck to try to get behind him. Clear case of self-defense. He could have just kept running. There was no wall or any other physical impediment preventing him from continuing to run away.

Perhaps. Except they initiated the confrontation. Can’t really claim self-defense if you start the fight. Yes, it’s a little more complicated than just that but…they really should not have pursued the guy in the first place. In a case like that, call the police, noone was in mortal danger until these clowns showed up.

The article I read said he was unarmed, but he was convicted of murder? Makes me wonder what the jury heard that didn’t get reported.

Don’t consider me a SME on this because I’ve not been following the play-by-play.

My recalled understanding of the charging is that the videographer, by use of his vehicle and maybe other actions, was considered to have committed an assault, participated in the kidnapping/detention, maybe conspiracy, etc. Those acts, committed in the course of a murder, lead to felony-murder.

Felony murder is a legal rule that expands the definition of murder. It applies when someone commits a certain kind of felony and someone else dies in the course of it. It doesn’t matter whether the death was intentional or accidental—the defendant...

And exactly where did the shotgun come from? Do you see him jogging down the street with it? Or perhaps did he take it away from the guys who were pointing it at him? None of this would’ve happened if the accused hadn’t chased down a guy whose only crime was being black in the wrong place.

Except they initiated the confrontation. Can’t really claim self-defense if you start the fight.

should not have pursued the guy in the first place.

If you were being followed would you attack those following you or continue to run away? We are taught here and in any training I have ever had that you opt for avoiding the fight. The decedent did not do that.

whose only crime was being black in the wrong place.

That is quite a racist comment to make. I don’t see where race had anything to do with it, as he was seen entering and leaving a home in their neighborhood and he was neither friend nor family to the owner of the home, nor anyone in that neighborhood.

If I were jogging, and suddenly two trucks started to follow me, block my path, firearms were clearly visible, they started shouting orders to me… Not good. May not be able to survive whether compliant or not.

Not even going to try…

he was seen entering and leaving a home in their neighborhood and he was neither friend nor family to the owner of the home, nor anyone in that neighborhood.

Home under construction, wasnt it?
I used to live near a neighborhood where luxury houses were being built. Lots of people went inside. Some just curious, some to copy kitchen design ideas. There was no Open House signs, technically it was a tresspass on the builder’s property, yet no cops or security ever showed up. I cannot consider this behavior suspect, much less a crime

So if police do not show-up, it isn’t a crime? Easy way to reduce crime rates. Trespassing is not a serious crime, but it is a nuisance crime. I have experienced that on my property. Not fun, especially when you have a young child and all sorts of people tramping through, leaving garbage, creating a path through your grass due to all the traffic.

Then their was a drug dealer apparently trespassing in my driveway making drug deals from his car during the day - right across the street from two schools. One day I came home to an officer in my yard. The neighbor’s fence was knocked down. The officer found two sets of tire tracks going from my driveway through the fence. He found pieces of broken vehicle tail lights and a small scale that he said is typically used in drug deals. My then teenage daughter was home at that time. Thankfully she was on the other side of the house and never heard anything.

However, the other issue regarding Aubrey case is there were burglaries in that neighborhood, so seeing a stranger go into and out of a neighbor’s home is suspicious, whether or not you believe so. Also, if you noticed, that was not a new home, nor a “luxury” home - it was being renovated. Many years ago, there was a spate of daytime burglaries in my neighborhood, as most people in my neighborhood are two-income families, so few people would be home. If the guy was “just looking”, why did he run away?

the other issue regarding Aubrey case is there were burglaries

So naturally, the only reasonable thing is for three guys to arm themselves and chase the guy down the street whilst pointing guns at them. Dumb and dumber.

You are describing actual felonious and near-felony behavior on your property. Entering a house that is unoccupied, unlocked, with signs of crews working is at most tresspassing.
I can appreciate there were burglaries, so these men had their suspicion about the stranger. They reacted hyper aggressively, like a gang does when they see a stranger in the hood, or soldiers do when they sight enemy patrol. Except Aubery wasnt, and here we are with the conviction and the life sentence.

Not illegal to follow someone but they did a little more than that. Saying that they did nothing until they were attacked is very misleading. Confronting someone, with a gun no less, is hardly not doing nothing.

o naturally, the only reasonable thing is for three guys to arm themselves and chase the guy down

Hyperbole much? The only one with a firearm was the man with a shotgun. If you watch the video, you see the decedent run toward the truck, not away from it. Further, you will see the decedent turn and run into the grass, then turn again, and run in front of the truck toward the man with the shotgun. We know from our training that we are supposed to avoid confrontations, not engage in them.

They reacted hyper aggressively, like a gang does when they see a stranger in the hood

Hyperbole much? Your comment is so contrived, it is beyond ridiculous. Watch the video.

Saying that they did nothing until they were attacked is very misleading.

Not if you actually watched the video.

Confronting someone, with a gun no less, is hardly not doing nothing.

I did watch the video. It doesnt matter to me, which way the gun was pointed, only that there were armed men in pursuit, targeting Aubery.

It doesnt matter to me

Of course, why let facts get in the way of your beliefs. Again, if you watch the video, he ran toward the truck, not away from it. Then, instead of fleeing, he attacked the man with the shotgun. We are taught to avoid conflicts, not engage in them. He could have kept running, there was nothing preventing that, especially as he turned to the right - off of the road he was on.

We are taught to avoid conflicts, not engage in them.

Yep. And the two and possibly three armed guys chasing down an unarmed man broke this cardinal rule. I watched the video, the jury watched the video and we’ve reached the identical conclusion. This conflict was started by and was the responsibility of the defendants, period.

I’m done with this.