I decided to test my feelings about Polymer frames and the use of a red dot—two subjects of being old and hard-headed. Steel frames are real pistols- polymer is a plastic gun. Red dot is only good for a range, or competitions-iron sights are better for CCW. So I purchased a Polymer frame P365XL and a Holosun 507k to see what the hubbub is about.

My Take after four range trips many hours dry firing and learning to find the dot when drawing my pistol. A total of 600 rounds, 30 min a day, give or take, depends on my Zoom meetings. I use laser cartage, and my target is at 3 and 7 yards and the same at the range. I did test it out without the Red Dot the day I bought it ten rounds- P365XL surprised me that it shoots well and the trigger is not bad. I was hitting 8inch paper targets and 3- 7 yards -5 rounds at 3 yards and 5 rounds at 7yards, all hits. It felt good in my hands, and it was not hard to get back on target.
I added the 507k and started to practice acquiring the red dot, which was tough. After about a few days and me swearing, this sucks. But I finally got the hang of it, kind of. I can draw and hit 2inch, 8inch, and 10inch paper target. Of course, having 32 MOA Circle helps big time!!

My summery
I need more training before I even think about putting in my rotation. Red Dots -I am still on the fence. Polymer frame pistols I will only have one. I wonder about all the new shooters who have a misconception on red dots- it will not make you shoot faster or in self-defense to acquire a threat more quickly than iron sights-my opinion. Red Dot use needs a ton of training. I forgot to add-I zero at 25 yards with a rest. 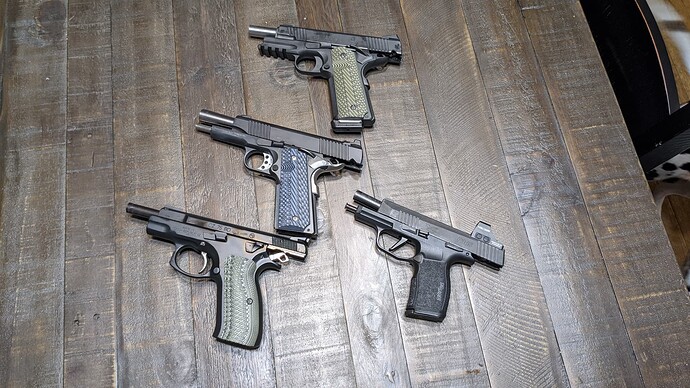 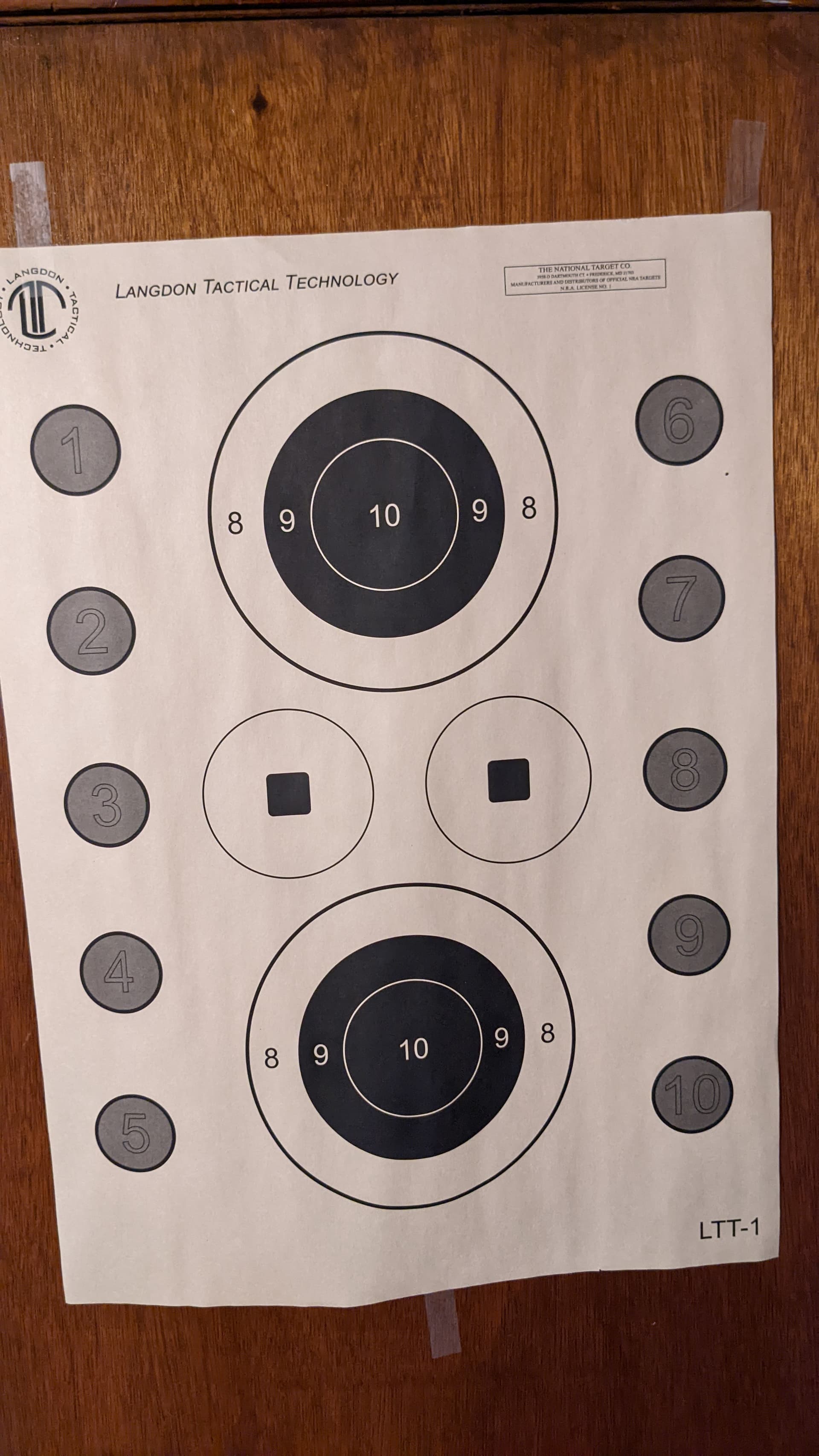 Can we get quantitative in this comparison? What drill(s) did you run and what were your hits/scores/times with each setup?

Going to a red dot tends to increase accuracy, not close range speed. It can also greatly extend the range at which accurate hits are made with speed.

In my experience, and the experience of many others, speed and accuracy is more or less the same at 3-5 yards…speed is equal with accuracy increased around the 7 yard mark…and both speed and accuracy improve from 10 yards and out, with the difference being substantial in accuracy at 15+ yards (due to the front sight not covering a huge amount of/the entire target)

Today when I shot at 5 yards, 2-3 rounds at a time, into a large (like, A zone equivalent), with the red dot, it was probably the same as it would have been with irons. Except the next shot to the occular was a tad quicker and more accurate, as even at a mere 5 yards I find the dot quicker for hitting smaller zones

3 hits under 3 second is the drill I use Hitting the the 10- It is simple and is easy to measure. I am slower by half a second using my red dots at a range of 3-7 yards- average time under 2 seconds for 3 shots. I did not write down my true time but it was under 2. What I saying I need a ton of practice-

Good report. I hope primers come back again someday — I also need more trigger time, and can’t burn wildly through what I have left.

My practice taught me that I had not been using sights at 3 yards — I couldn’t tell whether I was actually using the irons, which were clearly visible. Times were unchanged, but I couldn’t miss that I never even saw the red flash. At 10-15 yards the dots are quicker and more accurate — if I don’t miss my presentation. But at 5-7 yards I am relying on a sight picture — dot is more precise, but slower to acquire; irons are quicker, but may use the entire “A” zone. I won’t be ready to carry the dot until I get that middle range ironed out, so to speak.

I like the 507K, too. It’s big enough to find the reticle (eventually) but small enough to add nothing appreciable to the holstered gun by way of weight, bulk, or concealment. As someone whose first move with any rifle not destined for 100% optics was to secure a good aperture sight. I like the large ring reticle a lot — easier to find and drive, and it drops to center like a ghost ring with plenty of accuracy for me. I’m not trying 50yd shots, and have really only used the dot to get zeroed (and to learn that I could not find a brightness level to cover a suitable range of conditions).

I looked at the cci small pistol primers and read at the bottom “Inbound and preselling.”

Have you ever ordered from there?

I order ammo from there all the time and get very fast delivery. Usually 1 or 2 days.

It does take time; more specifically, practice over time.
My first shot usually isn’t any faster than with irons, but my follow-up shots and multiple targets are much faster and accurate with optics.

Thanks, I stand corrected — conditionally. Guess I will have to change my gripe.

I’m not exactly enjoying the new improved doubled price for factory FMJ, but a 4x increase for primers in qty 5000 still has me choked to the ground. That’s in addition to –

from listing page:
EXPECTED SHIP DATE: March 8th
These primers are inbound from CCI, and we are preselling
so they don’t take up space in our tiny 1,000 square foot warehouse.

from checkout cart:
YOUR ORDER CAN TAKE UP TO 14 BUSINESS DAYS TO SHIP

So maybe quick or maybe a month, and maybe they won’t presell more than they receive. I dunno.
Guess maybe the fat cat gets the worm for a while longer.

Okay first off this is just my opinion and I’m not presenting this as gospel. When I was young I was a 45 ACP and 1911 snob. You could not have convinced me that any other caliber or firearm was worth my effort. When I was 40 years old had open heart surgery and my sternum is wired together with stainless steel. After recuperation I went back to shooting competition and found that while The recoil was not painful it made the wire in my chest buzz with each shot. I found that a bit distracting to say the least. A close friend and mentor convinced me to drop down in caliber and just try a 40 cal in a paraordinance that was tricked out for competition complete with Red Dot. For whatever reason the buzzing in my chest stopped. All of a sudden I had the opinion that both the 45 ACP and 40 cal were pretty good calabers! I then discovered paraordnance LDA which I fell in love with for my carry gun.

Now I am 65 years of age with arthritis in my hands and elbows a bum knee and have to watch my diet! I decided a couple years ago to see what I could find in 9 mm modern ammunition and was quite surprised at some of the ballistics. So I bit my tongue swallowed my pride kissed my girl and went and bought a Springfield XDS in 9 mm. This was followed by a sig 938 and now a Springfield hellcat with optic Green Dot.

Now maybe necessity was required to open my mind and my eyes to the possibilities of something other than a 45 ACP and a 1911. Don’t get me wrong I still have three 1911s in 45 ACP and one of them would be a very nice carry pistol a Kimber ultra custom carry with bobtail grip. But I don’t carry it anymore. I’m quite comfortable and confident with my Springfield hellcat as I put a thousand rounds down range without a failure. With Federal HST loads I’m pretty sure the job would be done god forbid it ever be necessary. My eyes aren’t what they used to be but I find that under seven yards I am point shooting with decent accuracy center Mass. The dot is Handy at greater distance and since I have shot dots in competition for years I don’t have a problem of having to get used to them.

I would say in closing since this is getting very long-winded US older guys should at least take the time and make the effort to experiment with new technologies as they become available and pick and choose what we feel would work for us. In the end it really is not the caliber or the firearm you carry but it is what one is comfortable and confident with and will carry. A 22 LR it’s not something I would consider as a self-defense round obviously but I can see if you’re elderly or just scared of recoil it would be better than a pointed stick and if that’s what you’re comfortable with to carry then carry it.