Read the head line and you would think Road Rage, and that’s exactly what they want you to think… 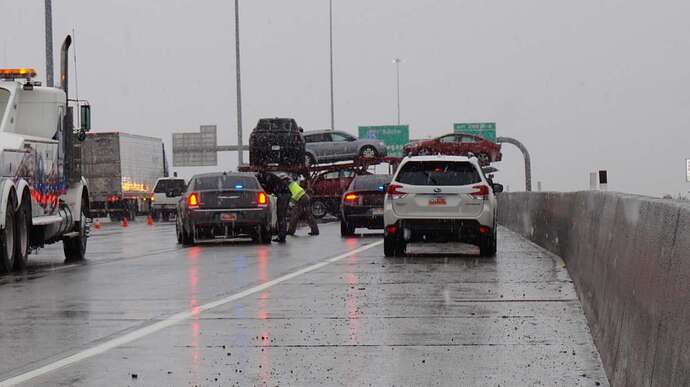 Troopers say they found a driver dead of a gunshot wound after his car collided with a semitruck on I-15 Wednesday. But the UHP says it has seen no signs of foul play.

No. My initial thought was suicide, based on the “no foul play” comment. Second thought while reading the article was negligent discharge due to impact, but shot in head, no foul play had me back to suicide. The main title simply says shooting, and media uses “road rage” every chance they get.
Commuting sucks. Work sucks. Life can be stressful. 42 years doing that, seen a lot of freaked out, stressed out people on the road.

I guess I missed the “no foul play” part of the HEAD LINE.

I edited to include my thoughts on the headline. Road rage is used as much as assault weapon these days by media…yet it’s not in the headline. Headline had me thinking sniper, if not suicide or nd.

When it hit the news this afternoon, we originally wondered if the truck driver did it…

Guess you never got to the first paragraph.

OK, I’ll clarify the intent of my thread. My intent is to expose the misleading way headlines are written probably to influence those that read only the head lines. In this case, a head line reader would see the head line " Driver dies after apparent shooting on freeway in Murray, troopers say" and conclude “Road Rage”. Once that deduction had been reached they would have probably

never got to the first paragraph

feeding into the extreme gun violence anti 2A narrative being spread so skillfully by the media outlets.

When asked whether a gun was found in the car, Roden said later Wednesday a “weapon was located, and initial indications appear to be leaning toward a suicide.”

Seems like the person writing the article wasn’t eager to put this fact at the beginning of the article. Everything now is “shocking” or “amazing” and it feels like the piece was written to create suspense or questions at least.

The article could have been condensed into a few sentences.
Likely suicide while driving, causes car of the recently deceased to collide with semi truck. Investigation ongoing…

the piece was written to create suspense or questions at least.

Yup. As I already mentioned, I see “road rage” as often as I see “assault rifle” these days, and if it was road rage, I’m quite sure the title would state that.
Different folks see things differently I suppose, and my preference these days is not sweating the petty stuff.

not sweating the petty stuff

AKA closing your eyes to the extreme Left-bias clearly evident in MSM.

And, pray tell,what benefits does being “offended” by a headline yield.
Sad the term “snowflake” encompasses both sides these days …ewww I’m soooo offended. Cripe.
I’m out.

pray tell,what benefits does being “offended” by a headline yield.

Never stated one should be offended. As to the term “snowflake”, it still does mean a childish Leftist that melts when it reads or hears statements that do not align with what they believe everyone should believe. They even burn each other. They did attempt to change that to mean others that disagree with their idiocy, just as they attempted to change the term “Karen” similarly. Not surprising as the Left is always trying, and many times successfully due to the full-court press of the media, to change the meaning of terms.

Due to them and the media, many people refer to AR-15s and other similar firearms as “assault weapons” or “military-style assault weapons” and standard capacity magazines as “high capacity” magazines. We do need to not turn a blind eye to their manipulations, nor anyone else’s, but currently the Left is doing the most damage.

We need to always speak out against wrongs or it will result in more backlash and penalties against us. I have found as an active member of rights groups that we do have the power to make changes for the good. We may not always be successful, but sitting down and being quiet does not work at all. Look at the success of MLK, Jr, as an example of the power of not sitting down and being quiet.

Couple of thoughts on the subject. 1. The Title reads “…Apparent Shooting…” Nothing is reported that there actually was a shooting “on the freeway.” 2. The death could have been the result of a suicide, but I’m pretty sure of the science behind everything that goes on during the firing cycle that would have realized a more immediate and bizarre road reaction if he was driving and did that to himself. Why do I say this? Because of the blast, inertia, smoke, etc. Also…

Not everyone responds or react like they do in the movies. Here’s a real story for you. Back in 2012, I happened to know of the individual that was shot in the head in broad daylight because he brandished a firearm and made threats to another individual. Well, the individual that was being threatened met it with a firearm of his own, and he shot the instigator in the head. Here’s the kicker … the individual didn’t instantly die. Most everyone in the area was in denial that the event occurred, but the individual was walking around still talking and complaining about the fact that the other person shot him in the head. When the EMS personnel showed up, he was still able to articulate all of his basic information.

Now, he did eventually die, but it was 3 hours later. My point is this, the individual could have been shot somewhere else but was still able to function for some time before succumbing to his wound and happened make his way into the roadway. Maybe it’s not the case here, but it can’t be ruled out either, until it’s ruled out. And by the way, the defender (in the story I just laid out for you) was never charged. It was ruled a self-defense shooting. Moreover, there were other particulars, as there always are, that is not necessary to share via this platform, but the crux is that the decedent was functional and lucid for some time though mortally wounded.

In the absence of anything definitive in the article, we can’t assume facts that have not been bought into evidence, we just don’t know, and may never know conclusively.

“Now, why would you put pertinent information prominently? Didn’t you get the memo? CLICK BAIT!”

My intent is to expose the misleading way headlines are written

I get your point! And I believe you are right. The headline and the narrative are not in agreement, and the writer would probably have done better if they spent that money on actually class time rather than the candy store. It points at something that is just not there, but we look anyway. lol.