Lights mounted on you EDC?

I have a stock sig P365XL that recently became my EDC. prior to that, it was a Sig P320. First was a Kel Tec P11. Every one stock as manufactured. I see lots of folks advocating for lasers, red or green dots, and flashlights. Does any of this make sense for an EDC hand gun? As prior military, a light seems counter intuitive to me. Clearing a room in the dark with someone hiding behind a counter is going to give me away long before I find the intruder. Lasers also seem worthless to the type of defensive shooting that would most often be needed. Thoughts? IMO, Stock from the factory makes the most sense. Change my mind. I’m willing to be convinced by good reasoning.

Just my two cents, I don’t plan on clearing rooms during daylight nor in the dark! My first EDC 4” 1911 had Crimson Trace laser until it became an annoyance. It was more a novelty. I was taught, front sight, front sight, front sight! Changed my EDC to a 3” 1911. No light, although, I keep an E2D LED Defender (Surefire) on a keychain. 24/7
I do, however, keep my bedside weapon light mounted. At 3:00am if I need to clearly identify a human object my light will blind them. I was taught to sweep or use my light intermittently. So as not to give away my position. 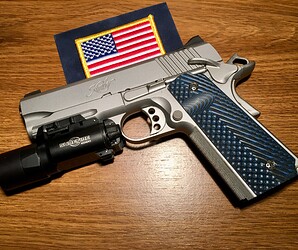 I’ve got a light on my home defense gun. It has a laser too I might play with, mainly want the light. I have a handheld flashlight too. My thought here is if one light fails the other will work. I also like the idea of holding my gun with a normal grip while also having light.

A good light will be disorienting and works as a way to verify your target. You’ll find some people on here aren’t fans of them.

I don’t carry a weapon light. I think it will slow draw, I’m not a fan of how holster have to be molded wider to allow for the light, leaving a gap for the trigger. I have a small carry light i carry in the evenings and some spare cheap lights in all the cars. They come in handy all the time. I also could present the flashlight separate from the gun without brandishing my weapon if something weird was going on. I would hate to aim a gun at someone whose behavior turned out to acceptable… I think I’ve heard the scenario of “I approach my car late at night and I see weird movement from a person by my car. I pull a flashlight out and it’s someone who dropped their keys and they’re just looking for them”. No need to aim a gun at someone for that

. The flashlight is also likely to solve the problem even if the person was up to no good.

I put it on when I store my gun for the night in my nightstand safe and take it off when I carry out of the house.

At 3:00am if I need to clearly identify a human object

Dang it Michael!!! Stop messing with the people who want to be Tacticool!!! Most of them never served and adding those lovely lasers and lights on all their firearms makes them closer to feeling team worthy.

As for my 2 cents…it’s all pretty much a crutch. People put lasers on their firearms because most can’t hit the broad side of a barn. As for lights, there’s 2 thoughts on them…it frees up one of your hands. This can be important to help deflect attacks or grabs at your firearm and/or help to gain distance in a VERY close quarter scenario. However, the other thought on lights is you are pointing your gun at whatever you shine your light at. I guess I prefer NOT pointing my gun at loved ones when I shine my light at them and also I prefer to have the flexibility of aiming my firearm in one direction while using the light to scan. 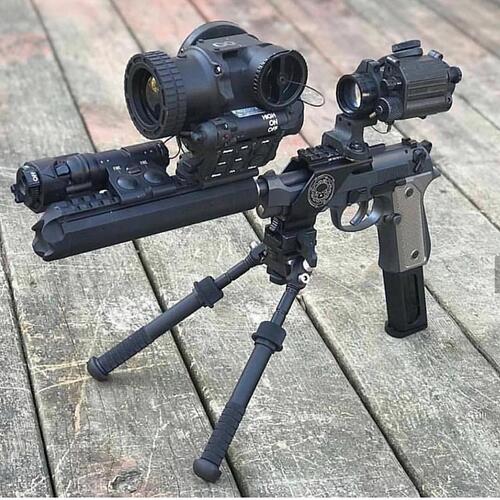 ● The world's first compact rechargeable light with an adjustable rail ●Only 2.57 oz with a max 600-lumen output and a 100-meter...

This one works like a champ, the wireless charging and Ambi switch near the trigger guard sold me on it. Plus I can use it on multiple pistols.

That’s what I’m talking about @Erik10

Need to add a Go Pro to it…

The light i think depends on your intended usage. You are asking about EDC, so I’m assuming you will be out and about as a CCW with a pistol…

As a CCW civilian, the odds of you being totally in the dark is almost zero. Almost all muggings and the like happen with at least some ambient light and the mugger needs to be very close to you. Bad breath distance, as they say. Remember, the mugger needs to be able to see you too in order to coordinate his attack.

If you are hunting/looking such as LEO might be when looking for a suspect, then having a weapon mounted light (WML) makes more sense. It lets you have one hand free for opening doors or otherwise manipulating objects/people, or two hands on the firearm.

IMO, if you only have one light, it should be an EDC light. A light on your firearm is optional, it typically doesn’t cost you anything other than weight/size, maybe holster selection, and money for the light. I do not keep a light on my CCW, but I don’t throw shade on anyone that does.

Lasers are different as they are an alternative aiming device. Sometimes you might have to take a shot where you can’t adequately see the sights, like from retention, or maybe behind/around cover. A laser (or a red dot) can help tremendously there. Is it “needed”? Not really, but it doesn’t harm much either and in some situations it can help.

A #protip is when aiming without sights but you have a weapon mounted light turned on, the center of the light tells you roughly where the barrel is pointing at close distances.

Use a laser on my 3 season carry, none on my winter weapon. Light on house weapon, live alone so not much of a worry of targeting loved ones… & I have a red dot on a canik tjat is really nice but takes quite abit of practice to get used to. Lasers & red dots are very quick when you’re used to them…