This is unfortunate for the 2 masked men trying to rob this man’s store.

Wow.
I’m not sure if in this case I’d use knife… it doesn’t look like “justifiable usage of deadly weapon”.

He probably realized it was not a video game…

As I always say this is what the world has come to. The man on the right with the white shirt looks pretty big. The man that was dressed in dark clothing is pretty small. If they were teenagers they graduated to stupid men at this point. I believe it may have been overkill if the kid had died. I heard the kid survived after being stabbed numerous times.

I prefer something in between. Be “protector” of yourself and your belongings. Use an adequate level of force… and kick the asses.

I watched Active Self Protection video on this and pretty much agree with him on the matter.

On the one hand, if you don’t want to maybe get stabbed, don’t try robbing a store (I will call it robbery, I can see argument for larceny as discussed in that video but whatever I’d call it robbery, I am not a lawyer). Simple eh?

On the other hand, lethal force really ought only be used for reasonable fear of imminent serious bodily harm or death, or certain other specific conditions (breaking into your home/habitation, kidnap, etc)…

I watched Active Self Protection video on this and pretty much agree with him on the matter.

At a gut level, yeah, the dude deserves his comeuppance.
At a legal level, nope that clerk is in a pile of trouble.

At a gut level, yeah, the dude deserves his comeuppance.
At a legal level, nope that clerk is in a pile of trouble.

I agree 100 percent with this statement @Craig_AR

Unfortunate for the one that was stabbed, (may he heal slowly and painfully).
The other two got away.

Nevada is a Castle Doctrine state and has a “stand your ground” law. There is no duty to retreat inside one’s home or place of work. In Nevada, the use of force for self-defense must meet certain criteria. The force used must be immediately necessary, must be in good faith and must be a reasonable response to the aggressor’s actions.

Resistance by Party About to Be Injured

Resistance sufficient to prevent the offense may be made by the party about to be injured:

IMHO the one who was stabbed was just going to take some property and leave. He never made a move towards the store owner. The big guy was already on his way out the door.

Nevada is a Castle Doctrine state and has a “stand your ground” law.

Bruce, you have conflated simple force with deadly (lethal) force, and also failed to differentiate between protection of life and protection of property. Neither Castle Doctrine nor stand your ground applies in this situation. Should you ever get into a situation like the Vegas video, you are in danger of going to jail for a long time. I highly recommend you follow Andrew Branca and read his book or take his class, Law of Self Defense.

That was why I said “WE SHALL SEE”. Since neither of us is an Attorney nor will we be on the
Grand Jury.

How it is: the clerk is likely in trouble, both stuff defence and using a blade will be leveraged against him.

How it should be: a crime against property in the presence of property owner is an attack against person. Period.

So, I also would not want to be in charge of the prosecution/prosecutor decision in this case, nor on a grand jury if serious indictments came down.

On the one hand, it’s a little hard to feel sorry for someone who robs a store and doesn’t expect the very real possibility of serious, possibly lethal, consequences. I don’t want us to treat these things so lightly that we end up back with Goetz on the subway type actions to get the pendulum to swing back. I don’t want us to go after the one who was going about their own business not bothering anybody until the criminal activity was initiated by another

But, on the other hand, I do not think it’s correct for somebody who hops a counter to grab a handful of smokes to be run down and stabby-stabbed over and over with what sure looks like lethal intent. That’s, uh, overkill.

Because I do NOT think that stealing something in the presence of the owner should be, for lack of a better term, a death sentence

And seriously what are we talking about here, $10? $50? A few hundred bucks? Not even? Stuff from the shelf of a smoke shop?

Hell one of my pocket knives would cost more to replace if it was taken as evidence than what they were stealing in the video. And I saw no actual threat of physical harm, really, let alone threat of imminent serious harm or death.

In my mind, once the guy jumps over the counter into the clerks space, all bets are off and whatever happens to the perp happens.

Unfortunately the law is pretty specific and this does not meet the criteria where deadly force can be used.

The law trumps my personal feelings. The clerk is in trouble

Does jumping over a counter, in and of itself, no other factors taken into consideration, represent a reasonable fear of imminent serious bodily harm or death? Even when the guy is jumping over the counter several feet away from the shop worker/owner, facing a different direction, with the apparent sole intent of grabbing junk off the shelf, with no reason to believe the jumper is armed?

There ought to be an awful lot of steps between just standing there watching, and closing distance to try to stabby-stab the guy to death.

This is one example of why I really think more people should be carrying pepper spray than, say a second mag or third gun. Just sayin

Imagine if store owner gave them face fulls of the hot sauce early on when asking them to leave. That almost surely would have been the end of it. Hell even after the counter jump, some Sabre or POM to the eyes, probably all over.

Seeing how nicely the clerk operates the knife I wouldn’t be surprised he could just beat the guy and drag him out of the store.
Why he chose knife? Hard to say. Perhaps it was not the first robbery attempt? 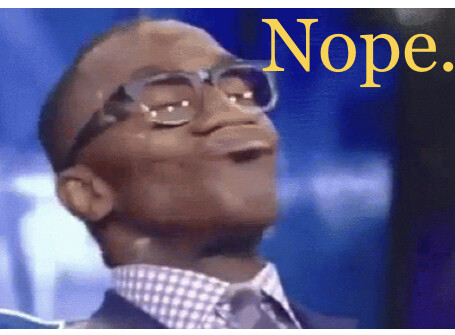 That store clerk is, plain and simple,

But, on the other hand, I do not think it’s correct for somebody who hops a counter to grab a handful of smokes to be run down and stabby-stabbed over and over with what sure looks like lethal intent. That’s, uh, overkill.

I have to STRONGLY disagree, it was trash day!
Trash came in, trash got taken out! Broken windows theory.
Why are we constantly coddling the bad guy! This must stop now!
Store owner did NOT bring that upon himself, this administration, proudly, did that! They put him in that position, they have put us all in that position!

The money and the cigarettes are not the point anymore!
Point is they are free to do it, very bad precedent! Maybe, just maybe, jumping the counter should be a death sentence!!

We used to have law and order, that’s TOTALLY gone. When I see and hear about law enforcement and the elderly being beaten within inches of their lives, sometimes someone needs to put a stop to the madnesses, and we are witnessing madness on a daily basis!
We’re on a very dangerous road, if it doesn’t get stopped at the counter, it will be all out war!