what the heck is the “U.S. Department of Safety?” No such Cabinet entity.

No other entity brought this upon anybody. Individual, personal decisions for which each individually is accountable. No blaming others, here.

I saw a guy who was compliant and stopped the threat!
That’s my grand jury testimony!
Ninja did not have a reason to jump counter!
Or we all become sheep!
If store owner let’s it happen once, twice, three times, it will happen for the rest of his life!

No such thing. Just answered with a meme.

This is a Cabinet created by “8 News NOW Las Vegas” to increase the credibility of the messages transmitted by them.

My personal thinking, and this is IMHO, until the criminals understand there will be risk when attempting even a robbery, a message must be sent.
It was obvious what their intent was.
I have zero empathy for criminal behavior.

I myself would follow the “law” regarding when deadly force is justified, but my thoughts go out to how wrong things have become.
Again, the criminals are being coddled, slap on the wrist, and they will just continue and try again the next day after their zero bail release.

One of the few things of Sharia Law I agree with is taking a thief’s limb as punishment for stealing.

Devils Advocate:
Two guys VS one Store Clerk looks to me like overwhelming force. The smaller guy had a back pack, worn in front, that could have easily harbored a weapon. They were both aggressive, the big guy grabbed stuff and the little guy jumped over the counter. To me the clerk could have “Reasonably” believed his health or life were in danger.

If this was a one-on-one situation it would be different, then when there was two altogether having him at such a disadvantage and giving him more of a right to defend himself in this matter.

Hell even after the counter jump, some Sabre or POM to the eyes, probably all over.

In the situation you are describing, even that would not be legally justifiable.

Devils Advocate:
Two guys VS one Store Clerk looks to me like overwhelming force.

Except it wasn’t two guys, at this point the first one was already running out the door.

And also except, there was no force being used or even threatened at that time

You don’t even think pepper spray would be justified?

Dang that guy is really in trouble for going all stabby-stab, if even pepper spray was too much

Let’s keep in mind that the situation was constantly evolving and thus needed constant reevaluation by the defender. The “two-on-one” thoughts, when the stabby-stab was clearly a one-on-one situation at that time (due to first dude bugging out, and only then because shop owner chose to close distance) made me think of this…we need to be sure to recognize that the situation when the knife was used was not the same situation faced when both thieves/robbers were standing face to face at the counter.

A well known example of how quickly scenarios change and those who would use lethal force on another are expected to react is the parking lot patrol incident in I think it was FL. Man gets belligerent with woman about parking space, second man shoves mr parking lot patrol to the ground, and while most reasonable minds agree that mr parking lot patrol would have been justified in firing if the pusher closed distance while mr patrol was on the ground, it was clear in the video that the pusher actually backed up and was turning away, while empty handed and unarmed…and thus NOT justified to shoot.

I think enough time and obvious knowledge of the situation to the shop owner pass in this case that it is not reasonable to use the presence of the first thief, who was out the door and out of play, in justification for the stabby-stab.

Comparison to Drejka case is not fair. Drejka began the quarrel, and was known for starting quarrels. The store clerk showed 0 aggression, and offered compliance to the robbers. Did the robber have to be brazen, did he have to jump the counter close enough to the clerk, to make him fear for what comes next?

@Bill170 spoke about messaging criminals, well, criminals do message victims about compliance, plenty of examples of gas station clerks receiving savage beating for no reason. For this cleark, fear of violence after the robber jumped the barrier between them was reasonable.

Perhaps fear of violence was reasonable. The question will be, was it a reasonable fear of imminent serious bodily harm or death

Also, if your justification for lethal force is to send a message, you screwed up

what the heck is the “U.S. Department of Safety?” No such Cabinet entity.

OK, then what is DBS? Department of

The way I understand the laws around here, I don’t have to wait to be injured before I can defend myself.

Of course you don’t have to wait to be injured

So that will be the question. Did the unarmed guy who hopped the counter, who was in the process of facing away while grabbing items off the shelf, present a reasonable person with fear of imminent serious bodily harm or death.

Or will prosecution be declined even if that threat was not present, because maybe the elected politicians/DA want to send a message to criminals

Also, if your justification for lethal force is to send a message, you screwed up

Of course not. The message to criminals is a consequence of strong, decisive defense, not the cause of it.

A bit more context in this article. The clerk does state his fear of possible weapon. 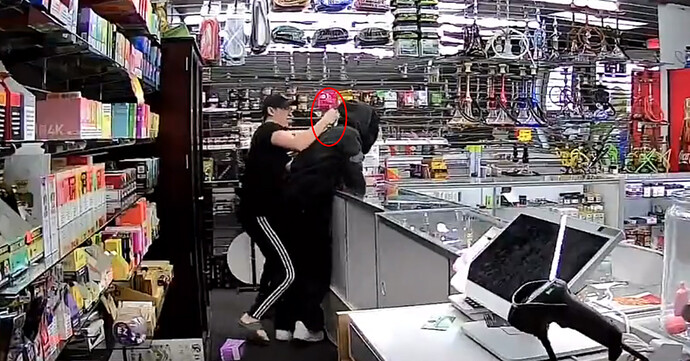 Las Vegas, NV – The Asian-American owner of a Las Vegas smoke shop grabbed a knife and stabbed a 17-year-old thief who was trying to rob his business in broad daylight on Wednesday (video below). The incident occurred at about 3:25 p.m. on Aug. 3 at...

After learning of the interview with the owner, I’m not going to second-guess him.