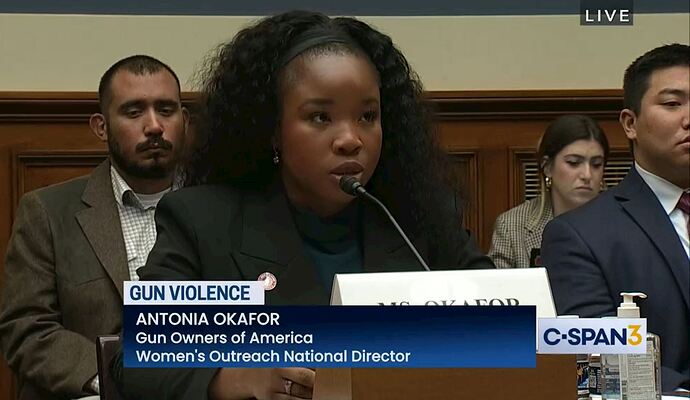 GOA is Fighting for Gun Rights

The last couple of months have been a roller coaster for gun owners.

Then, Speaker Pelosi seized her chance and rushed a so-called “Assault Weapons” Ban through Congress.

Gun Owners of America fought hard in Washington, D.C., against this ban.

Testifying alongside the AR-15 manufacturers Sturm Ruger and Daniel Defense, GOA’s Antonia Okafor defended the right to own an AR-15 before the House Oversight Committee.

One anti-gun Congressman even “attacked” Antonia for sharing a GOA post about defunding and abolishing the “Bureau of Alcohol, Tobacco, Firearms, and Explosions [sic].”

Yup, the same Democratic party that consistently gets the ATF’s name wrong and that thinks an arm brace allows you to “bump fire” a pistol in “full auto,” also thinks GOA’s stance against the ATF is scandalous.

Later, an entire sob story was written in The Guardian about the incident.

In an article entitled “I testified to Congress about the gun industry. It rattled me to my core,” Ryan Busse wrote that:

“Republicans invited a witness from Gun Owners of America (GOA) – a group so extreme that it calls for abolishing the Bureau of Alcohol, Tobacco, Firearms and Explosives – as one of their experts.”

Thanks for the resounding endorsement!

But after the House passed its unconstitutional gun ban, the fight moved over to the Senate. 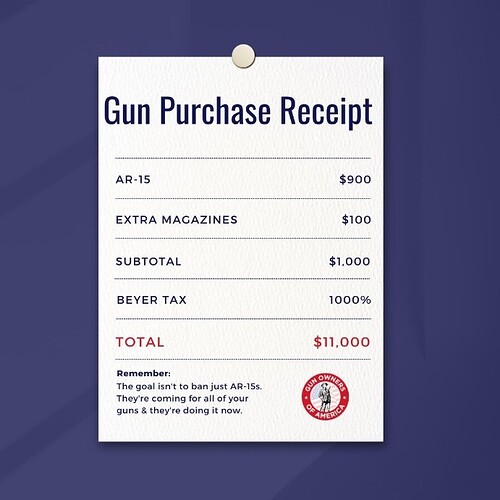 Gun Owners of America’s team in Washington D.C. was hard at work, over a recent weekend, monitoring the passage of the so-called Inflation Reduction Act.

Gun owners had reason to be concerned, as Rep. Don Beyer proposed an Assault Weapons Ban in the form of a 1,000% tax.

Thousands of GOA activists answered our call when we highlighted the fact that this unconstitutional tax was designed to be amended to the spending bill which passed that weekend.

Gun owners demanded that no gun control be included in the upcoming bill.

Thanks to your activism, Senators on Capitol Hill realized they were being watched by their constituents. The end result was that no gun control passed, and a $700,000,000,000+ monster of a spending bill did not contain any hidden gun control!

So thank you to everyone who took action! You helped keep gun control off-the-table and out of consideration.

While the House of Representatives was busy criticizing GOA because we want to defund the ATF, GOA’s lawsuit to hold the ATF accountable really picked up steam.

In an unprecedented show of support from top law enforcement officials around the country, 17 states’ Attorneys General signed onto our lawsuitchallenging ATF’s so-called “Ghost Gun” ban.

These Attorneys General read our lawsuit against ATF and agreed that it was so well written that they would rather become plaintiffs in our case than merely file an amicus to help us.

Again, this was the lawsuit where GOA and the Gun Owners Foundation (GOF) filed against the ATF to stop it from implementing Biden’s restrictions on homemade guns. This rule would also expand ATF’s illegal gun registry and force gun stores to keep Firearm Transaction Records (Forms 4473) FOREVER.

Sam Paredes, on behalf of the Board of Directors for the Gun Owners Foundation, thanked the Attorneys General saying:

“Despite the ATF acknowledging serious issues with their preliminary rule, this anti-gun administration has made clear that they would not be deterred in going after ‘ghost guns’ one way or another. GOF is excited to partner with the chief law enforcement officers of so many states in this fight. We are confident that our challenge to this final rule has serious merit and that we will ultimately prevail in having it dismantled as unconstitutional in federal court.”

Thank you to everyone who donated to make this lawsuit possible!

With all of your generous support, GOA has grown so much over the last few years.

Eric Blanford from the channel IraqVeteran8888 and Tim Harmsen from the Military Arms Channel have both joined Gun Owners of America as state directors. Eric handles Georgia; Tim handles Indiana.

With these patriotic Second Amendment advocates combined with GOA’s grassroots activists, the voice of gun owners in Washington D.C. and your state capitol just got even louder.

Together, we can all defend the Second Amendment from infringement and restore it where our rights have already been infringed.

Welcome to the team, Tim and Eric!

The program hosts in-person activism and firearms training for female GOA members across the country.

It’s a great program for any woman wanting to get involved in federal and state Second Amendment activism.

If you or a female gun activist in your area is interested in this position, please have them reach out to antonia@gunowners.org to apply before August 31st, 2022.

We’ll keep an eye out in Washington D.C. and in your state capitals and alert you to the next major battle against gun control.

Thank you for everything that you do to support GOA and defend the Second Amendment.

P.S. To renew your GOA membership or to join for the first time, please click here.

If you forward this email to others, it is strongly recommended that you first remove the ‘unsubscribe’ link at the bottom of this message. Otherwise, it is possible for a secondary recipient to inadvertently unsubscribe you from the GOA alert system. 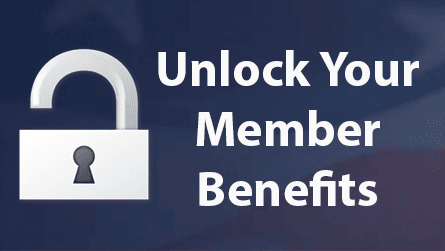