Gun confiscation in Illinoid coming in 2023

This is my 1st topic, so I hope I did it right. This is what the state of illinoid citizens have to look forward to from our burgermeister jay bob and his communist regime, in 2023.

Call to Action: Politicians are coming for your Guns (HB5855) - Illinois...

Call to Action Anti-2nd Amendment politicians in Springfield have filed HB5855 with the full support of the most anti-gun Governor this state has ever seen, Gov. Pritzker.  The proposed legislation, […]

If only the masses would wake up out of being Passive

You mean sheep! That’s what we’ve become! Nothing is being protected, not our lives, not our speech, not our children not our morals. This is a sinking ship, SOS didn’t work, no one is coming and we’re going down! Just like Titanic! Prove me wrong!

true,but i refuse to be a sheepish,I i will protect what is mine until they prize it out of my cold dead hands!

Worse, many aren’t passive, they are actively supportive

I will have absolutely No remorse when they go down

So after they do all of this, will they be held accountable for the continuing increasing crime? Will they be held responsible when the police aren’t there to preempt criminal assaults? Will they answer for for gun violence that will certainly still exist?
I doubt it.

No, they will not. and it gets worse …
January 1st, jay bob prickster’s “Purge Law” (like the movie) takes effect.

"On January 1, 2023, in Illinoid, “The Purge Law” becomes reality. According to Will County State’s Attorney James Glasgow, one of the most high-profile state prosecutors to come out against the SAFE-T Act, is joined by 100 of 102 Democratic and Republican state attorneys in Illinois opposing the law. *Under the SAFE-T Act, second-degree murder, aggravated assault, drug offenses, intimidation, carjacking, and arson will not be detainable offenses unless the suspect is proven to be a flight risk or risk to public safety. * According to Glasgow, the standards to prove “willful flight” in these instances have also been raised to unrealistic levels, further obstructing the opportunity to detain individuals on these charges. There are over 600 inmates in the Will County jail. However, under Pritzker’s recent law, about half of these inmates will be released on day one of it going into effect, according to Glasgow, with the remaining half set free 90-days later. “I have never heard of any government passing a law to release everyone in their jails, and no one would ever think to do that,” Glasgow went on. “That would be suicide.”
That means only thugs, bangers, drug dealers and ne’er-do-wells, will have weapons and they will know the neighborhoods are free of firearms, leaving citizens to act as fodder for the thugs, bangers, drug dealers and ne’er-do-well democrat voters.
God Save the Republic! 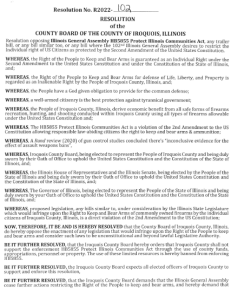 (Also known as the “Surrender To Criminals Who Don’t Follow The Law” Act)   From Iroquois County Board Chairman John Shure:   It is my pleasure to announce that the […]

Good for them. I was just there, doing some hunting and fishing. Beautiful country, nice people.

Not sure it’s correct to say they’re an example of an underdog, but appreciate the diversity and a voice being heard among the masses.

*Under the SAFE-T Act, second-degree murder, aggravated assault, drug offenses, intimidation, carjacking, and arson will not be detainable offenses unless the suspect is proven to be a flight risk or risk to public safety. *

Second degree murder is not a detainable offense?
Not a flight risk?

More info if there are fellow Illinoisans on here, go to …

Fill out a witness slip “opposed”, before December 20th.

more info, HB5855 Illinois Semi-Auto Ban is Coming - FFL-IL (fflil.org)
Don’t know if it will help, the commies have a super majority in the state house, senate and of course the burgermeister. The burgermeister wants to run for President in 2024 so he needs soros & bloomburg money. They know it’s unconstitutional, all they are trying to do is bankrupt all 2A groups like ISRA, GOA, NRA and the like, with lawsuits.

Initially, I personally was not opposed to the idea of looking for ways to reduce tragedies by restrictions on arms. I know I’m in the monitory on these pages.

However, what concerns me about the Bill, is it’s relation or risk to make it illegal to reduce muzzle flash, reduce the loud sound of a gunshot, reduce the comfort or grip options, recoil, reduce the options on length of a rifle.

I attached two links below. One is a vid, titled “Why everyone needs an AR-15”. I don’t. I never thought I’d promote the idea, I don’t, and in the vid he ‘makes no bones’ about his bias, but in the very last couple of minutes of it, he talks about the average person and the importance of accuracy. I take accuracy serious in that if inaccurate, an innocent can get hurt, an innocent meaning the bystander, family, or person defending his/her self. Not to mention, affordability.

I do caution against Bills which take away safety and comfort features, despite my agreeing with having limitations to combat misuse of arms.

What I don’t hear as much is what else are both sides doing to fight crime and fight against crime by arms; Such as via services, counseling, education. It’s not just about the firearm, it’s a bit more sophisticated than that.

I’m guessing both sides, we all, agree that we want less crime, less violence, less misuse of firearms, but I hope we can combat it by creative ways, unless we all just don’t possess imagination. I should get off of my _ _ _ and try to help.

Why is this ever so more important?; Because these Bills have already become law in other U.S. regions, and may very well be proposed in your County and in your State, no matter where you are in these beautiful “United” States.

If you oppose the Bill, here’s a link to write to the legislators:

Dashboard for the Illinois General Assembly

Politicians need to enforce laws, no “safety act” will deter crime, it will increase it. As long as the politicians (law makers) refuse to go after the real problem nothing will change. Politicians constantly go after law abiding citizens, which have not and will not deter to crime, crime will continue to rise, especially after honest citizens have their guns confiscated and only the police, (who are minutes or more away from you being assaulted by an armed thug) thugs, bangers, drug dealers and ne’er-do-wells are armed. Counselling, education, training sounds nice but, you will never get thugs, bangers, drug dealers to sit in class and pay attention.

My guns have never “Gotten up, walked out the door, and shot anyone.”
What is wrong with my guns ?

They are law-abiding. How is that wrong? Nothing personal, it’s not about you.

But it IS about Me and the millions of others out there like me. And I presume you? Honest gun owners. Armed and Very Capable but Law Abiding. Defensive oriented and trained.

I was referring to your firearms, where you asked what is wrong with them… I guess my humor did not translate well in my post.