For those who don't carry an extra magazine

I guess someone needs to go somewhat against the trend on this. Maybe it’s because of where I live, the environment, the people, population density, or whatever, but I personally know no one who carries a extra mag. or revolver speed loader on their person as their normal day to day practice. Again, I’m talking on their person and not in their vehicle or home. I’ll grant you that I’m part of the ‘elder’ group and we are not prone to going into higher risk situations. Most of us carry what I call “get off of me” guns. Personally I don’t see me being able or needing to reload because the odds are long I will ever be in a bad situation that will not be settled in seconds. This is not to say I never have or never will again carry spare mags, only saying that my normal practice is not to carry ‘extra’. If I lived in a high crime rate area, high population density, moved in large crowds, etc. then I might do it differently.

I look at it this way, if my “get off me” magazine fails, I have a backup. I’m of the age also that I don’t see myself in a “John Wick” type gun battle. (On a side note , sure do wish I could do a single handed press check and take out eight bad actors with one magazine)
But after the current videos around our free country of innocents being violently injured, I now carry more than my local Sheriffs. Peace be with us, watch your six! Pray we never need the first mag!

It finally happened to me, but fortunately not in a defensive use situation. When I took my holster off one night I noticed the magazine was not seated properly. Weird. Then it happened a couple of weeks later. Then I noticed in the holster (which I really liked and had been using for several months) the edge of the kydex crossed over the magazine release (i.e., didn’t fully cover it) and if I pressed right on the edge it flexed enough to eject the magazine. Damn. If the kydex extended another 1/8" to 1/4" this wouldn’t be a problem. If I’d had to draw my gun for a defensive use there is a real possibility I’d have had a single shot and then needed to do a reload. No backup mag and I might be toast.

And now another holster for the reject bin.

yeah… weird experience… but quite often.
Don’t get rid of the holster yet. Kydex can be reshaped easily by yourself. I’ve got 2 holsters that ejected magazines during draw stroke and I’ve fixed them in 5 minutes.
Kydex become flexible in higher temperature, so simple heat gun or keeping it over kitchen burner allows you to change the shape of holster for mag release button.

Thanks. The problem is I think, that I’d have to be able to stretch the Kydex rather than just reshape it. And even if I can stretch it, that would make it thinner and more flexible thus retaining the issue. #437 on my to-do list is contact the holster manufacturer, sigh.

One of my previous carry guns, which I love except for its weight, also fits that holster. They are both 1911 Officer’s Model pattern, but the previous one is an actual Colt. I suspect the manufacturer would have used the Colt for molding the holster so I am going to check to see if it has the same problem, and if not will repurpose the holster for when I want to carry that one.

You don’t need to stretch it, just create the space between mag release button and holster. That is the easiest fix and works perfectly.
I have to fight with this problem with most of my holsters. Some manufacturers just simply forget that mag release button can be on the other side of grip. Even you mark “left handed”, that usually means for them how to mount the clip.

EDIT - picture added:
This is what I did with mine: 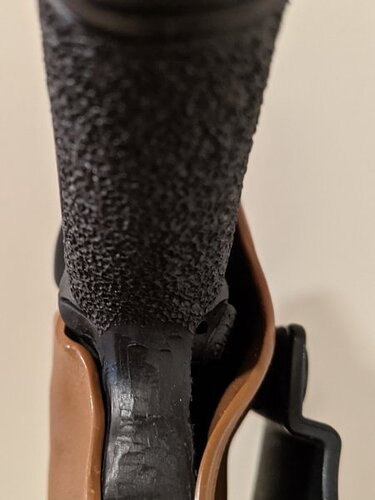 @Jerzy @Harold26 would trimming that kydex away be an option? Not sure if it would affect retention, or maybe allow your clothes/body to press it instead?

Trimming was hard for me. I don’t have good tools. After trimming you will need to smooth the edges and this doesn’t look pretty. Check my picture - I’ve tried to smooth the other side. It even started to discoloring.
The small change in shape I’ve done for mag release hasn’t change anything with hostler’s functionality - still the same retention and not different feeling carrying it.

Thanks. I will give it a try!

Good luck. It’s very easy.
Hit the spot up, press it out a little bit, cool off with water. You can do this dozen times, it won’t harm the kydex material.

Carrying a spare magazine (or speedloader) isn’t about having enough rounds to fight off the zombie apocalypse, it primarily about failure recovery. It doesn’t matter if your gun holds 6 or 16 rounds, if the magazine or rounds end up on the ground as part of resolving a stoppage the firearm is useless. Carrying spare ammo is a way to recover.

I wanted to follow up. I was able to move the Kydex further from the magazine release, but that didn’t help. Because it is the edge it will still flex enough to press the release. I’m also getting into territory where I’m creating a gap that might allow access to the trigger guard. So I’m done, that holster is in the regrets pile. Looking at the picture you’d posted I think the kydex on mine is much thinner and thus has more flex, which is why reshaping didn’t help. I did compare it to another brand and discovered they bring the kydex all the way over the release to cover some of the grip panel. When you press on it the grip panel keeps it from flexing to touch the magazine release.

it may be a weak / thin kydex then. All my corrected holsters are still over mag release button and don’t touch it even squeezed.

You can use Dremel or other tool to just cut the piece of kydex which bothers the button.

I would still use that as a training holster or failure drill holster at any given time you may have a scwibb and either have to tap , rack, assess ! Because we are not in a combat zone the assessment instead of bang ! We may not need to expend any more rounds I seem all conscientious but we should be we don’t have qualified immunity so a great practice scenario for manipulation drills