Really hoping this sticks. And hoping it spreads to the other state’s.

Unlike the crazy peaceful rioting, being shoved down our throats! Among a billion other things that I just can’t type fast enough? I do understand where you’re coming from.
It’s not a Blue Wave, it’s a Blue Virus!

Here is the summary of the decision 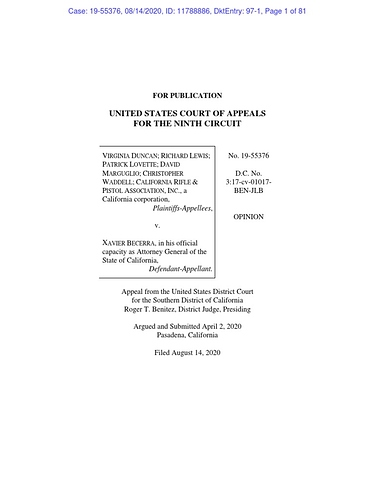 I get it brother, and I’m just as frustrated about all of it. The rioting and looting is senseless, defunding police is insane! However it works to our benefit. 40% of all gun purchases right now are by FIRST TIME GUN OWNERS!! That’s awesome!

I think people are starting to understand what we’ve been preaching all along. The only person that you can depend on for your safety is YOU.

order now…it could flip at anytime just like the mail order ammo!

Get it in, and make sure to keep those receipts.

Still up in the air, as far as “buying” goes. There is more to follow, I’m sure. This is one of Bolshemento’s pet projects, and it will likely take a Trip To The Supremes to make this happen.

If you order and the en banc overturns, or something else, the worse you will experience is a cancelled order and a refund. Best to get your orders in NOW.

Good resource if you want to learn more about Duncan v Becerra
https://michellawyers.com/duncan-v-becerra/

Wow! I’m surprised. That was a remarkably lucid and well written opinion for the 9th Circuit.

A victory and a step in the right direction. Thank the good lord.

There is still a long road, and I’m curious how it plays out. When our state legislature convened this January (Virginia) one of the things they get patting themselves on the back was “all of our common sense gun laws are constitutional”, so I’m hoping this will give them pause at least regarding magazine limits the next time they are in session.

So this victory was on a 3-judge panel where 2/3rds wanted to apply strict scrutiny. Those same 2/3rds said even if it was intermediate it would have failed because there was little/no benefit shown by the state that would warrant infringing on the right. The 1/3rd objected on both counts.

So it is possible that they take this to en banc. The makeup of the court will once again play a huge factor. I do not know for sure, but I’m hearing that somewhere around 50% of the judges in the 9th are conservative (thanks to Trump). So it depends on who gets picked for the en banc (is it random?) as to whether the judges would be likely to use Strict scrutiny (where it will assuredly get thrown out) or intermediate (where it will likely be kept, not because it doesnt still violate but because those likely to say intermediate will also want it to continue).

There is a risk the Dems will take by pushing for an en blanc. If they do, and they win, they risk the case going to the supreme court. At this point, the SC is a toss up. There were several cases the SC had the opportunity to pick up and rule on which if strict scrutiny were applied would almost surely have been victories. For several reasons, which aren’t entirely clear to me, the SC chose not to pick those up. There is again a chance, if this goes to the SC, that the SC will choose not to hear the case.

Much of this hinges on November, and more specifically Justice Ginsberg.

If RBG retires while Trump is in office (be that before January, or if he wins after January) he will put another conservative justice on the SC and you can rest easy that all the 2A cases they take up will be held to strict scrutiny and very few of these laws that we all know does nothing to accomplish the stated goal of reducing gun crime will stand up to that scrutiny.

However, if Biden wins in November, RBG retires immediately after he takes office and is replaced by another liberal judge (why o why is the SC political too, grrrrrrrr). And now we are back to at best the situation we are in now where these cases are sometimes heard, but usually not by the SC. And if any other justices retire during Biden’s term it will only get worse.

One immediate effect here in-state is that LE will likely stop enforcing these idiot-wind regulations in most jurisdictions. Speaking from my own enforcement experiences, VERY EARLY in the history of the CA assault-weapons fashion statement we found these laws to be unworkable and vague. The mag capacity question was treated in the same manner–unless there was a free-standing derivative offense (e.g., robbery, murder, ADW, drive-by shooting) simple possession of AWs or high-caps weren’t usually charged in my county. Such instances were either ignored, or confiscation in lieu of complaint was the disposition. As an expert witness, I spent a lot more time unwinding faulty AW cases than I did assisting on initial confirmation/exclusion of firearm status as AW or not. YES–the law was that screwed up.

The mag capacity law was so poorly written initially that our deputies along the Arizona border often chase fleeing suspects across the Colorado River into Arizona. We had instances in which deputies who could lawfully carry the high-caps within CA left the state chasing bad guys…and upon return were by law turned into felons by “importing” high-cap mags back into the state. THAT is why the peace officer exemption got added to the statute after-the-fact by our idiot legislature.

Being a gun owner in this Worker’s Paradise is a lot like being a person of color in 1940s Mississippi.

I am so glad that We The People finally won a case. Unfortunately the AG has already warned that the “Stay” is still in place and the “Not my Governor” is already pounding his chest making speeches that they will not stop until this is ruled in their favor. How can a small pocket of people that vote for these ridiculous laws overrule the enter state? I will never stop fighting for my Rights. Just have to wait a bit longer on the Mags.

Welcome to the family brother and you are blessed to be here.

Welcome to the family and god bless you.

Thank you! Great to be part of the USCCA Family! God Bless

None of the companies I placed an order with will ship standard and high-capacity magazines to CA. One is holding or reserving the magazines I placed an order for. They and others announced that they will hold on to the magazines I already paid for but will only ship them if and when CA legally allows importation. I can choose to cancel and get a refund but I doubt I’ll be able to once again acquire the magazines I already paid for if and when the stay is lifted. A few have said that some companies shipped the CA-prohibited magazines. Several online personalities in the gun community suggested not to get those magazines shipped to you. LE may be monitoring and subsequently entrap you. Not worth risking losing your gun rights over something like this.

It’s not worth it brother in my honest opinion but you have to decide with your gut. Don’t let something like this make you lose your privilege that you earned and worked hard for. DON’T DO IT. God bless you.

This is a very important victory for all Americans, that is the protection of the U.S. Constitution. We have an uphill battle for obvious reason, without getting into the politics. Supporting those loyal to the Constitution is the key to success. I believe this is sufficient. Long live the Republic. Peter

Some state AGs have file a brief in this case, urging an en-banc review.

Virginia Attorney General Mark Herring has filed a brief (along with other State AGs) in the Court of Appeals for the Ninth Circuit in Duncan v. Bacerra (otherwise known as the California Magazine Ban lawsuit). In the brief, they assert that states have the ability to implement “common sense” gun controls for the “safety” of the people and urge the Ninth Circuit to take up an en-banc review of the 3judge panel’s decision. There argument points out that other court cases have been in their favor…