I watched the video and right after I heard this: 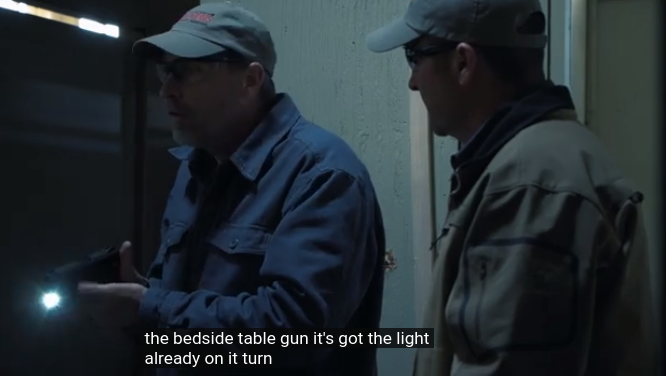 “it’s the middle of the night, I can hear glass breaking or whatever, I’ve got a bedside table gun, it’s got a light already on it. Turn the light on and GO”

I spoke to myself

Oopssssss… I just shot my son’s friend who spends this weekend with us… How have I forgotten about it?

What I mean… in such hurry there is a huge chance this story could turn into my version.

To me the main advantage for a weapon mounted light is leaving one hand free to grab my son and go while still being able to illuminate and engage targets. It also let’s me use a normal two handed grip which for me at least means faster and more accurate fire at mid to longer ranges.

Having said that I actually don’t have a light on my EDC. Mostly due to the expense of lights and new holsters for them but also due to the added weight and bulk. I do have a light on my bedside gun. But even though it has a light I keep a separate flashlight next to it. For any bumps in the night I grab both lights and use the flashlight for searching, saving the weapon light for if I need an extra hand to grab my son or something else.

I would never have a weapon light as my only source of light. I wouldn’t want to be swinging my pistol around to search for possible threats as that would likely make me appear as the threat to other law abiding folks. I prefer to keep my pistol in the holster until I am certain it is needed.

You are missing something, there are 2 ways to illuminate with a weapon mounted light, umbrella lighting amd base board lighting. You stated it is longer to present the pistol because it is pointed either up or down? Well if you are using a handhel light where is your pistol pointed? Straight out in front of you where it could potentially be pointed at a non threat? Or pointed up or at low ready? Kinda seems a moot point.

If you are serious practioner we all should train for low light scenarios as much as day scenarios.

Others above stated well if you point the light in the bad guys direction he can just shoot at it. Well guess what, during the day bad guys and good guys dont need a light to see each other to shoot.

Im so tired of EVERYONE making a big deal about weapon mounted lights. It makes wrapon manipulation easier especially if one hand is moving a loved one or holding something good luck doing that with a handheld.

Ive come to the conclusion this is the same debate as 9mm vs 45 and reddot vs irons.

If you dont want to use one dont or do. But lets remember fundamentals of safe handling wether your using a hand held or weapon mounted light.

There are a ton of videoes out that CLEARLY show how to effectively and safely use a weapon mounted rifle or pistol light.

I got your point. And I agree. I just shared my opinion, maybe even experience. Yes, I’ve been training low light scenarios a lot. Not as much as day scenarios, because it is impossible, but after hours and days of training I found WML not working for me. Does it mean this method is bad? No, definitely not.
I’ve been just pointing what can happen if you either point your mounted light at somebody or illuminate via board or ceiling.
You are right about not muzzling anybody using handheld light, but in my case coming from any ready position to full extension is easier and faster if I’m using light on my other hand. And it may be not physical speed but the way how I cannot control light + trigger with one hand and I better perform having independent control over trigger and light. Hard to say, but this is my experience and my way to deal with such situations.

It may look like never-ending discussion, it’s always this way whenever people get different opinions and everybody would like to keep his / her version to be the best and sometimes the only one.

So we discuss. And I’m hoping that everyone get some lessons from this discussion, perhaps small part of it, something than was never taken under consideration.

Let’s say bump in the night, you grab your firearm and your light, accidentally rest your finger on the trigger, accidentally have your firearm oriented to the threat because you’re focusing on what your left hand is doing, and someone appears, adrenaline kicks and you’re startled, which causes a sympathetic squeeze and you pull the trigger, and shot one round through your brothers chest.

That scenario is just as likely and as possible as having a firearm and a mounted light.

Its called idiots with guns.

You can’t fix stupid no matter what method you use, except for the method that takes themselves out.

It called training and being consistent. One more time a good tactical flashlight will impaire the threat/friend for you to make a decision. Read about OODA loop. Observe orient decide act.

Practice allows us to repeat the practiced behavior consistently

If you hear bump in the night you are not fully awake and your decision making is foggy- lawyer speak. We all have our own way-as long as we train with our method. We will be ready if that day comes. 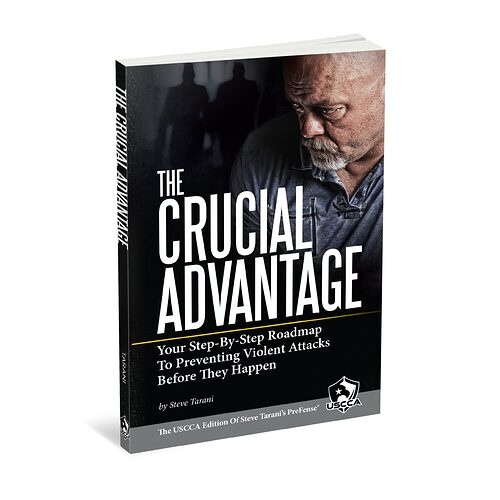 The Crucial Advantage: Your Step by Step Roadmap to Preventing Violent...

Spot on Buddha-in-the-sun, as a retired 38+ years LEO, 34 as a firearms instructor, 27 on SWAT & a BOG Nam vet, I’ve seen & done some dumb ■■■■. Anytime your weapon leaves its holster there is the potential for an unintended discharge. I carry both, a flashlight & a weapon for EDC, the light is on my weak hand side & weapon on my strong hand side. I’ve pulled my flashlight out 100’s of times more than my weapon. The only weapon I carried with a mounted light was a SWAT weapon. None of my duty or EDC weapons have or had a mounted light on them.

None of my EDC pistols have lights on them. They have at times in the past, but not anymore, and I don’t intend to change.

As a private citizen carrier…if I haven’t positively identified a threat, I’m not drawing my gun. That’s pretty much the long and short of it.

Home defense is entirely different. The threshold to be justified having a gun in my hands in my own home is a few dozen orders of magnitude different than out and about/public. Home defense it actually makes sense.

BUT, since I am huge on consistency, zero of my handguns have WML on them.

For me, I have WML on every long gun (shoulder fired)], and none of my pistols. And my first-choice home defense firearms are long guns.

accidentally rest your finger on the trigger, accidentally have your firearm oriented to the threat because you’re focusing on what your left hand is doing,

That’s the beauty of having firearm for single function only… Whatever you wrote will never happen because I’ve been training to not resting my finger on the trigger and not pointing muzzle on anybody, no matter what the situation is.
These are 2 safety rules to be used 24/7.

Let me say this, I live on the third floor of a high rise, there is a roof right outside of my window that is only accessible by going through 2 locked steel doors and a locked steel hatch. One night at around 2:00 am I see someone on the roof, walk by my window. I tell R to go to the safe place. I walk from the living room into my bedroom, the direction the guy on the roof was walking. I don’t see him from the bedroom window so I turn to walk back into the living room. It’s dark, I’m amped up, I have Kimberly in hand. As I head down the hall I see a figure walk from the living room to the kitchen. Right then I got it, that’s how family members get shot, it was R, she grabbed her self defense tool and was heading into the safe place. I didn’t point my firearm at her or anything like that but I did pretty much crap my pants. It gave me a whole new perspective on home defense. In the end, the guy was a drunk from a party in another condo, he had jumped out of the window and was trying to figure out how to get off the roof.

I personally don’t use a WML on my EDC. I have one on my HD night stand pistol an Inforce light mounted on the rail of my M&P 2.0 4". IMHO you use what you feel comfortable with. Neither method is wrong, it’s personal preference. My reason for not having one on my EDC is because I’m always home at night and it is a rare occasion if I do go out at night. But if for some reason I did have to go out at night I would take my M&P 2.0 because I do have a holster for it. BTW the videos were very informative and I did get some valuable points. Thanks for the posts @Forensic_Wow.

Wow- lol!! i cannot wait to see it

I do not have WML on any pistols for several of the reasons already discussed. I don’t really intend to change due to cost and buying new holsters. I have no low light training, but hope to get some some day.

One thing that Massad Ayoob said at MAG40 last month was that a weapon mounted light can give you one more opportunity for positive target identification immediately before you pull the trigger. That is, you will have already used a handheld light to identify the target and make the decision to draw and fire. If you have a WML on your pistol, that’s one more redundant step/double check right before you pull the trigger. That seems to make sense to me.

no such thing as coincidence… Massad Ayoob video pop on YouTube feed- and Premiered today 40 min ago.

The general consensus was “personal choice” not “right or wrong”.

Yes, 37 minutes ago. I ran across while cruising YT.