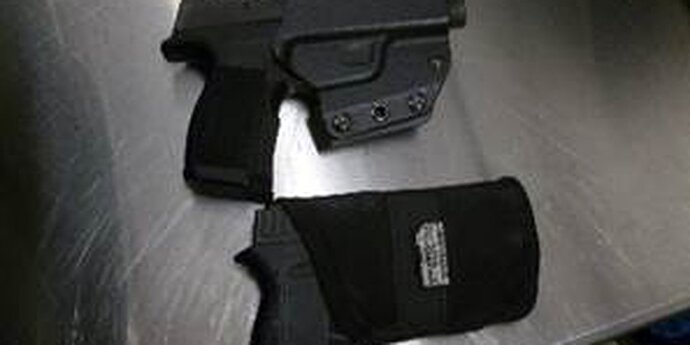 Allows honorably discharged veterans/active-duty military members to carry a concealed weapon without a permit or training.

(Apologies if this was previously discussed. I did a search and didn’t find it.)

I’m going to give an unpopular opinion on this, and then you can all tell me why I’m wrong.
I don’t really like this law. I’m glad military members and veterans get to carry, but there are still two things I don’t like about this compromise.

First, because Constitutional Carry is better. If the 2nd Amendment is a right, then we shouldn’t feel satisfied when one group of people get it but another group doesn’t.

Second, along those same lines, I generally oppose “second class citizen” laws, and while I appreciate anyone’s military service, I don’t like codifying special rights for people who can earn it. Again, if the right to keep and bear arms is a human (or at least an American) right, then I shouldn’t have to “pay” for it. Imagine if a state passed a law affirming the right to free speech for veterans. It sounds good on the surface, because we want to support veterans, but we should all have the right to free speech, and it shouldn’t take a state law to give us what is already guaranteed in the U.S. Constitution.

So there it is. This law does some good for some people, but I’m dissatisfied with it.

I agree with your assessment. I would also add that one of the reasons I suspect this law was passed is because the law makers considered people in the armed forces to all be well trained and capable with firearms. While I assume everyone gets firearms training during their basic training I suspect the vast majority don’t have to handle firearms after that except for maybe annual qualifications?

Most importantly none of that training is focused on civilian self defense situations and the laws associated with carrying and using firearms in a non military setting. I’m all for military personnel being allowed to carry in public. But I think it is a mistake to assume they are all more capable of doing it any more responsibly than your average citizen.

Divide and conquer. Government is not your friend.
CT, peons can’t have normal mags, sbr’s, AR’s unless in “other” configuration, threaded pistol barrels etc…mil and le…no issue. DD214 and register the stuff, it’s yours to keep.

That’s true. I learned a lot from self-defense oriented classes that I did not learn from the Army. And that’s not a deficiency in Army training, it’s just that they train for large scale, team-oriented operations. Self-defense training often focuses on being alone, or at least being the only armed person.

Let me introduce you to “Carl”…

That is a very good assessment. I agree with all of your points.
Military training is much different than how a person with a firearm needs to be in the civilian world.
I am sure the people making this law feel good about themselves, but are ignorant of alot of things. I wonder if they put some effort into cleaning up the mess called the VA? Not that is what needs to be done for veterans… 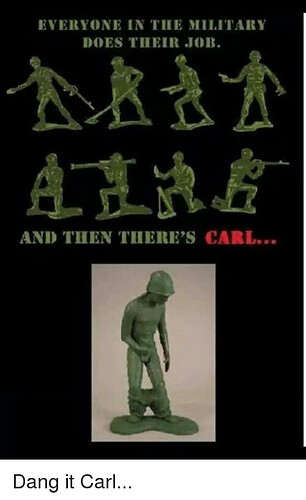 I guess you have not had a chance to read Starship Troopers. Interesting perspective of a society where military service is the only guarantee of citizenship.

I totally agree with you, and I’m a veteran. Laws that restrict the 2A to only police or military are exactly the reason the 2A as written applies to The People. Not only those that are, or where, employed by the state. Because the military and the police are the STATE.

I do believe that anybody honorably discharge has the discipline to know if they should carry a gun or not.

I am not so sure of that based on the stories I here from my friends who served. The Dunning Kruger Effect is alive and well across all sectors of our society. We just aren’t very good at knowing what we don’t know. Myself included!

Not sure if it’s still at 22 per day, and realizing there’s alternative methods, but veteran suicides are both sad and troubling.

The continuing toll our veterans are paying is truly heartbreaking. I hope the politicians look beyond the casualty rates during only the active phase of the last several conflicts before deciding if the next one is worth the cost in destroyed and permanently damaged lives. Both the soldiers and their families.

Laws that restrict the 2A to only police or military are exactly the reason the 2A as written applies to The People.

I’m embarrassed to admit this, but I didn’t even think about that aspect of this story. If only the military and police can be armed, that means only the “government” can be armed, which is exactly the opposite of what the 2nd Amendment was meant to protect.

Interesting side note the reading list for Marine Corps officers, when I served, was incredibly eclectic. The Killer Angels, Starship Troopers, and Ender’s Game were some of the many required books.

So there it is. This law does some good for some people, but I’m dissatisfied with it.

I have no problem with that. That’s why I don’t support mandatory training, or any of the riders that get attached to gun laws.

Shall Not Be Infringed: is not that difficult a concept to understand.

I’m a veteran and I agree with you.

Agree with you unconditionally. The Second Amendment is inviolate, period. Background checks, finger prints and all the rest of the “carefully picking through your life” is invasive and for one reason and one reason only; to track you. Wannabe criminals oddly enough (LOL) don’t bother with dutifully going to the sheriff’s office and “registering”. Histories of nations going back over 100 years have been disarmed similarly to what we’re being subjected to here. (I’m a history junkie on firearms) Indeed, they didn’t have the “sophisticated (see intrusive)” print checks, (in my county you can actually submit fingerprints online!) photographs, and endless paperwork. Growing up in the 50’s you could order a rifle from Sears and VOILA! it came in the mail. We also had a strong justice and moral system; now it 's a joke. If I may make a suggestion: study what “politicians” have been doing for the last 30 years. Visit the ATF web-sight (make sure you have your coffee and a snack) and peruse the overwhelming amount of “laws” on the books already.
Our Second Amendment right is an anathema to those seeking “power.” I listened to Barack Hussein Obama opining:“The Constitution constrains me”. Think about that in light of the possibly irrevocable damage being done to our country in the last year and a half. Also ponder why we now have 85,000 new “IRS” agents who may very well be armed…really?

P.S. The gummint already has all the information to the littlest detail they need on veterans. And probably some that even the vets aren’t aware of.

Agreed, the high rate of veteran suicide is sad and troubling. I was introduced to Operation Save Our Soldiers several years ago and have been contributing to it every year since. I found out about it through Jeff Anderson, who was providing online prepper info and products. OSOS provides warrior retreats for soldiers suffering from PTSD, and Jeff says the recovery rate is wonderful. (He’s a veteran.) Here’s a link. (Disclaimer: no affiliation, just a donor.)

Operation Save Our Soldiers - It's Time To END Combat PTSD

Yes, there is a cure for combat post-traumatic stress disorder (PTSD) for veterans through Rapid Resolution Therapy at our sponsored Warrior Retreats.

P.S. The gummint already has all the information to the littlest detail they need on veterans. And probably some that even the vets aren’t aware of.

Due to the nature of my military service, I know I am on a government list or 10. I would be shocked, if I wasn’t. Doesn’t mean I want to give them more reasons and lists to put me on.