About a month ago, I picked up a Bushnell RXS100 red dot sight for my Canik TP9SFX.

It easily fit on my Canik with one of the included mounting plates. Overall, the red dot seems pretty nice. It weighs in at 2.24oz, the dot was nice and bright, and it was pretty easy to sight in.

And I was hearing the melodious sounds of steel plates ringing every time I pulled the trigger. That was at about 20 yards.

The fun lasted about 70 rounds. After that, at 50 yards, every shot was landing 8’ below the target no matter how much I adjusted the elevation on the sight.

That, plus the fact that it does not have an auto-on feature, rendered it unsuitable for me as a home defense or carry sight. So back it went.

Too bad. With a name like Bushnell, I was hoping it would be a decent optic. 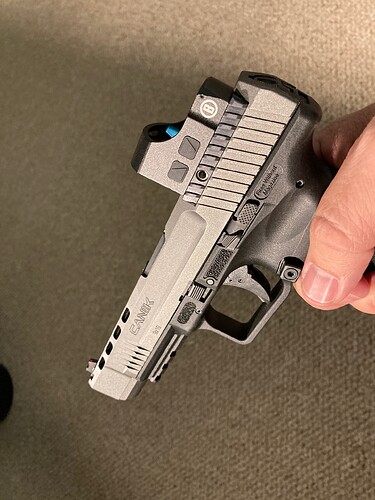 Thank you for this info. I’ve been always avoiding such stuff at “magic” price and I see Bushnell name doesn’t change this as well.
Perhaps it’s just a issue with this particular item, but even that I wouldn’t trust $80 worth tool as part of my self defense.

how many more Caniks do you have?

Just one, plus two Rugers - trying different sights on the same gun.

oh. OK. I thought the Canik you had with RS-01 was a different one.

That’s too bad it didn’t work out, $80 would have been a steal!
Happy Anniversary

Thanks for the review / update.

I bought the big brother of your RDS, the Bushnell RXS250, shortly after the release, also from Amazon. The difference in construction led me to consider the 100 as a range and fun use device and the 250 sturdy enough for EDC. The RXS250 died after a few hundred rounds within two months on my M&P 2.0. I had to send it back under warranty; Bushnell sent a brand new one that is still working fine after almost two years and several thousand rounds. I am happy with it

However, I changed so my EDC M&P has a Holosun 509T, and the RXS250 rides on my training & practice pistol (and thus getting a lot more active use than the Holosun).

I had heard people were more happy with the RXS250. Glad yours (at least the second one!) worked out.

Too bad. With a name like Bushnell, I was hoping it would be a decent optic.

I don’t necessarily think it’s so much the brand name as the $80 price tag. When it comes to RD optics I have found that there are some budget ones from almost every brand. However, I have only found a set of features/reliability with RDS starting at about $150+. For EDC, I have not found anything I’d trust my life to under $250. YMMV