I have purchased a Bonds arms 9 mm for SD. Being that most confrontations are at close distances that it would be easier to carry, safer to carry and it would work. What are your opinions on it? Would you feel comfortable carrying one for self-defense?

Maybe as a BUG but that’s about it. Too many other options.

Pro’s: Sure is concealable and easy to carry, compared to mainstream models. Could be a good backup “arm”, especially if one is less inclined to carry a back up, a Derringer is more portable. Convenient if you have another firearm in the same caliber, for compatibility. Works of art, craftsmanship, one can pass onto their family/generations.

I nice chap and his wife I ran into at the range, he a trucker in occupation, told me he carries two firearms, he shared “One is none, two is one”.

I came very close, but instead went for two different .22 options, and a .380 to choose from, as back ups or when I need to go most discreet. Not as concealable as a Derringer but distant cousins per se.

I have considered picking one up as a BUG or, to have handy as a nice anti-carjacking device. I imagine that at 1 foot’s distance, a pair of .45LC would take care of a threat long enough to pull the EDC in a pinch.

I checked out this review on it. IMHO I would use it as a backup just to throw in my front pocket. It’s only 2 rounds. The gun is well made though. It would have been better if the barrel opened in the other direction, downwards instead of upwards. 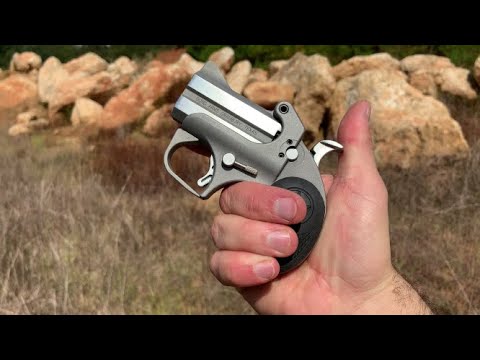 Would you feel comfortable carrying one for self-defense?

It doesn’t matter what we think. Are you comfortable carrying one for self-defense?
Everyone carries differently, we have to accept that.

Me? If I could be assured that my next deadly force confrontation would be a single attacker at 3 yards or less away from me? Sure. But I looked at my life contract with God and I didn’t see that clause so nope. I carry a Glock 48 with a reload. 31 rounds and the ability to hit at longer ranges and address multiple targets quickly with great sights makes me feel better about my SD kit.

And to be clear I was just addressing the OP question:

“ Would YOU feel comfortable carrying one for self-defense?”

I have nothing against the gun or platform for other folks who have different perceived SD needs. The BA guns are very well made and I have several friends who own them and are very happy with them.

Nice. My largest EDC is the 48 with 31 guardians. Good to hear it’s trusted. Hidden gem, for me. Best to you.

Would you feel comfortable…?

No.
Two shots is no margin. Manual operation is too slow. Restricted range is too…restricted.
For 18-20 oz, I can be considerably more “comfortable”.

I agree with some of the other commenters. As a BUG but not as a primary EDC. You have to cock it and it only holds 2 rounds, and for its size you could have a small pistol or revolver with at least 5 shots. They are fun to shoot so as a range gun, sure, all day.

I don’t really like them. For me they’re awkward and unpleasant to shoot. Granted my experience is exactly two shots but I didn’t enjoy those two shots. I think it was an older model so that one looks nice and new so who knows. Definitely concealable.

I would not be comfortable with a 2 shot anything for self or family defense. Often thought of the Bond Arms in 45 LC and .410 but then reality would arrive and after 40 years in LE I would have to acknowledge 2 shots is insufficient. Put aside the size and speed of a 9mm, giving full credit to hitting the assailant with both rounds, there is no guarantee he/they will go down, they are alone and you will have trained to be able to reload in a quick manner. Failure in any of these (and several other scenarios) could/would be catastrophic. I believe a person would be better served with a weapon they are experienced with, can comfortably carry and access and holds sufficient ammunition to be an asset in an armed conflict situation rather than a liability. If you want to carry a 9mm derringer, good luck, god bless.

The least I’ve ever gone with as a firearm is a KelTec P32, many years ago.

These days the least I would ever go with, as a firearm, would be a Glock 42.

In reality, the least I ever actually go with is a S&W Shield. Now a Plus.

Interesting looking piece but that’s a lot of size and weight for two relatively slow shots. Think I would feel under gunned in just about any situation I might have to use it for. I’ll stick with my LCP Max when I want to travel small and lite.

No way. One or two shots is just not enough. I want a full magazine in my firearm and at least two others.

I have a Bond Arms .38/.357 Derringer with 2.5" Barrel; recoil is hard and add stress to it. Works well but you have to train and feel comfortable in using it. That grip is short, and accuracy is hard to maintain at longer distances.

It can be a great cannon for a belly gun, but rather have a little more distance. The 21 feet that they
give us on drawing and firing might be nice to have. The Tueller Drill, it is not impossible to make but not everyone can make that draw.

Ah thank you…. Way to many abbreviations these days —