Big Brother is and has been watching every move you make 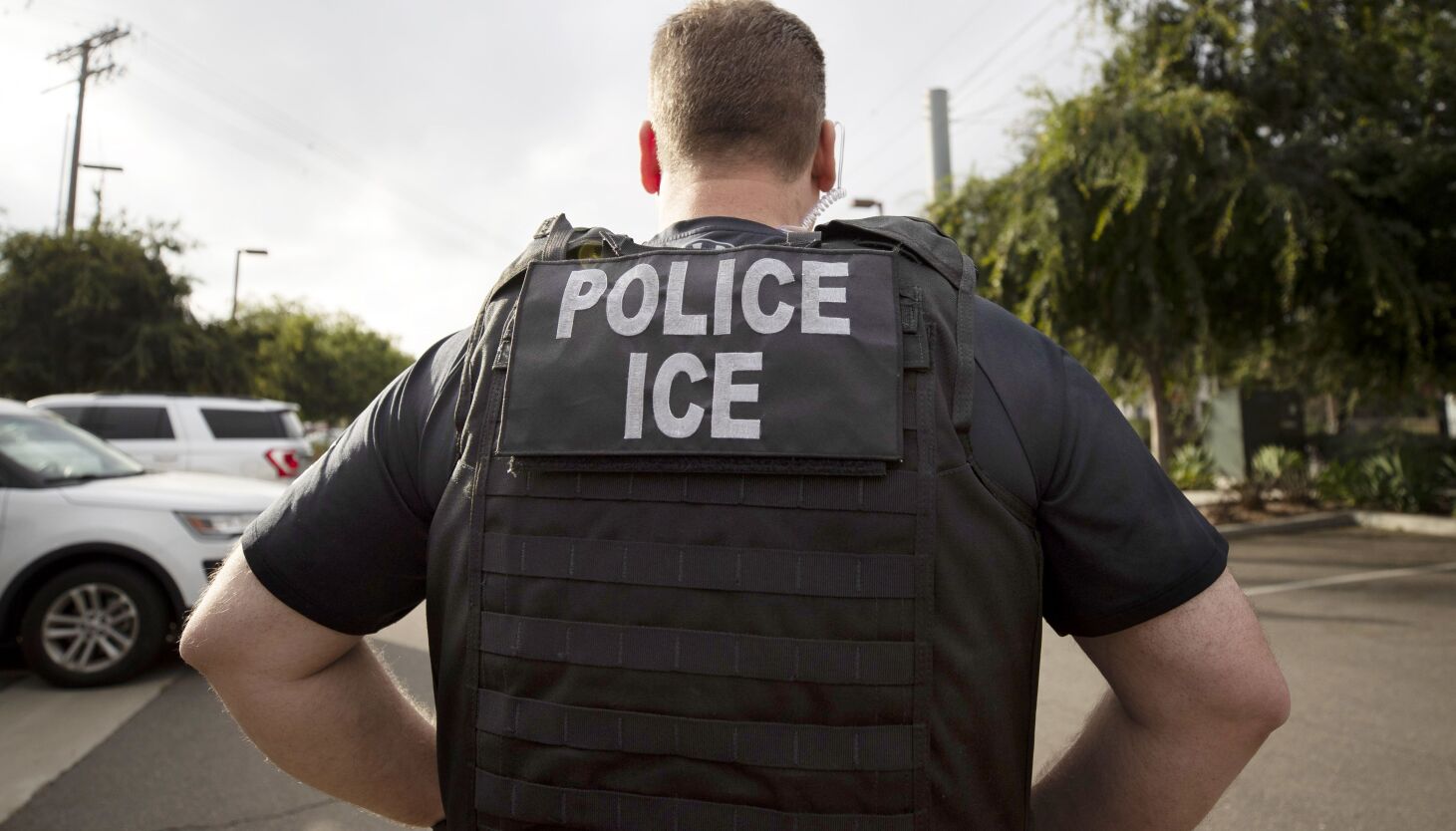 Report: ICE is tracking habits and compiling data on the majority of Americans

U.S. Immigration and Customs Enforcement has what researchers call a “dragnet” surveillance system, compiling personal data and tracking the habits of 75% of Americans in attempt to deport undocumented people.

We watched the Federal Government build the " he Utah Data Center (UDC), also known as the Intelligence Community Comprehensive National Cybersecurity Initiative Data Center" not too far from our place. We know they are tracking our movements by tracking cell phone data and now this.
To make it even worse "According to researchers, there has never been a full congressional hearing or Government Accountability Office report on ICE’s surveillance program.

“We really have no jurisdiction over them,” Romero said about ICE".

"Almost all of the data gathering was done without a warrant and little public or congressional oversight, the report states, playing “a key role in the federal government’s larger push to amass as much information as possible about all of our lives.”

Not that I’m into conspiracy’s or anything, I played my part in the military in the 70’s but let’s not play like this stuff isn’t happening, we know we can’t trust those that claim to protect us.

Who are the “undocumented people”? If they mean illegal aliens. those are felons, and I support ICE’s effort to deport them. I am pleased and surprized someone is working to restore the integrity of our nation’s borders and immigration process, cause of recent, I only saw examples of the opposite.

I’m all for protecting our borders but 100% against the Orwellian surveillance state that has been increasing its reach over the last several decades. After 911 the politicians created the Constitution free zone anywhere within 100 miles of our boarders including the ocean. In this area the various agencies we’re given the right to search and seize at will with virtually no due process. It’s obvious that ICE and DHS etcetera feel their overreach has no bounds and we have no right to privacy.

We don’t have to worry about our freedoms being taken away. We have already given them away in exchange for a false sense of security.

It’s the Department of Homeland Security, not the Department of Respecting Your Rights.
Security is important, but they will always err on the side of more security, because that’s their focus. This is why we’re supposed to have checks and oversight.

The outrage about violating Americans’ privacy is legitimate, but the tune here is “abolish ICE”. Nice try.
It doesn’t look good when ICE demands access to public data, such as drivers licenses in places that issue illegals drivers licenses, or voting records in places that allow illegals vote, or school enrollments. It wouldn’t be necessary if laws were in place blocking illegals everywhere from receiving photo id, voting, renting, going to school, etc. Would the liberals accept such laws, out of respect for privacy of legal residents and citizens of this nation?

Who are the “undocumented people”? If they mean illegal aliens. those are felons, and I support ICE’s effort…

Do I not recall that you frequently express distrust of government to do the right thing and uphold the Constitution? But you’re fine when they do whatever they choose after digging through your:
• DMV records
• Utility company records
• Internet records
• Phone records
• Child care and child welfare information
• Employment records
• Geolocation information
• Health care documents
• Housing records
• Open-sourced information from social media?
You may certainly hold that view. Generalized surveillance is not ok by me. According to the article, they are digging through the “documented people” along with the unauthorized. Unlike so many routine government activities about which people complain, I do consider this intrusive data mining to be unlawful overreach by a police state.

BTW, the “undocumented people” are not felons — no more than members of.USCCA. That is, some probably are, but not so much as to justify the generalization.

The act of being present in the United States in violation of immigration laws is not a crime — it is a civil violation. H.R. 4437 did not become law. Entering the United States without being inspected and admitted, i.e., illegal entry, is a misdemeanor (or may become a felony, depending on the circumstances). But many undocumented immigrants do not enter the United States illegally. They enter legally and overstay, work without authorization, drop out of school or violate the conditions of their visas in some other way.

@techs Illegals are illegal, we need strong, well funded ICE to quickly deport all 30 million of them.
At the same time, we need to protect Americans’ privacy, but not to the detriment of this effort to restore border and immigration integrity.

Honestly, it’s an invasion. It should be treated as such. How would you stop them from coming in and setting up life in your backyard or your home then expected you to for foot the bill for their housing for food, health care and education? That’s exactly what is happening!!!

…strong, well funded ICE to quickly deport all 30 million of them…

I say zero the ICE budget and turn them back into INS — that’s how my mother’s family got here. My father’s family came with the early waves of illegals — no Constitution then, and no stopping the plundering horde looking to steal a continent and dispossess or exterminate its occupants.

My nation is of and by immigrants, and I don’t fear or resent them until their spawn starts to think they are more entitled than those who preceded them or who follow.

Conditions have changed since 1700s, not sure you noticed judging by this rant. Do you want to abolish the nation’s border? Say good bye to the nation as well. Desire to ignore some laws for all people turns into some people ignoring all laws. No wonder Democrat-run cities are overrun with crime and some parts look worse that a war zone.

and no stopping the plundering horde looking to steal a continent and dispossess or exterminate its occupants.

Don’t think the open, undefended boarders worked out very well for the indigenous Americans back then. And the only reason the American continent could absorb the mass of unregulated immigration over the next few centuries was because 90% of that indigenous population had been wiped out.

I suspect that if you offered an airplane ticket to everyone in the world who might want to come here that you would get a billion or so folks who would hop the first flight. We can’t support the people we have here now. Europe’s cheap labor open boarder experiment does not seem to be going the way they had hoped. In the end it just leads to dangerous diaspora and more cultural and racial strife. I would prefer to see us pump money towards stabilizing the countries our short sighted foreign policies have destabilized over the past several decades. This would make far more sense then building a multi billion dollar wall that can be defeated with some $10 ropes and shovels.

There needs to be controls and legal systems at the boarder to limit immigration to sustainable levels. Otherwise our great experiment in freedom and democracy goes down the drain.

Turn off the spicket, ceasing flow completely. Filter out the filth and allow those who will assimilate and contribute. Just as was intended.

If you willingly give up your freedom for a promise of security, you will end up with neither. If you don’t believe that, just ask the American Indians (no disrespect intended using that term) how that worked out for them when the US Government told them to give up their weapons and lands, and go live on reservations.

Wait a minute, so we let them in at the border and then track them down when they do bad things and deport them, the Democrats have no intention of deporting too many unless they are know Republican voters, they want them here as a “replacement” voter for Americans who aren’t buying in to socialism. Take a look at 2000 Mules if you can find it, it’s an eye opener.

I was living in CA during the time Caesar Chavez was organizing farm workers. At time things were very violent. I can tell you that illegals coming north across the border want nothing less than more illegals coming across the border. Why (you may ask)? Because they know the next group will work for $0.10 less per hour and will take their jobs. Biden’s plan to flood the electorate with new Democrat voters is likely to blow up in his face.

Big Tech is tracking us too. Google can track you with your cellphone location turned off. When the WEF plan to merge corporate-power with government-power is complete ( it might already be completed) then we’ll all just be surfs to the all powerful elite. They will come for your guns because only the army’s they control will be allowed weapons.

Actually, they track armies with cell phones, too. It was an issue for U.S. forces in Iraq. Iraqi resistance groups and terrorists could track movements of U.S. personnel because of their phones. I don’t know if this was ever confirmed, but there was a warning about smart watches and fitness trackers, too.

I know the Russians have been having the same problem. People are tracking their cell phones and sending their locations to the Ukrainians.

In all fairness the current day American Indians have tax free casinos and will probably take their land back in the future. I’m not being derogatory by any means. I know their journey has been terrible and they aren’t taking care of their own as much as they should, but they do have the opportunity to make things happen. You’re 100% right about the government. They are doing it to us right now. When they no longer fear the people, they gain complete power to do whatever they want to whomever they want.

Theodore Roosevelt believed in this. Give time for those who entered time to assimilate and ensure they assimilate properly. Learn to speak English. You can go to Miami and there are so many people who do speak a word and care to learn. You go into a store and the employees only speak Spanish. Nothing against the people but just learn to speak the language