I thought I would share something that happened to me the other day, and what I learned from it.

I was in my car by myself, driving across town. My destination only 3 or 4 miles away. I get to a railroad crossing in an industrial area and have to wait for the train to get by. I remember thinking to myself, “Self, this is not a good place to be. If someone comes up behind you, you have nowhere to go. There is no room between the buildings and the train if you should need to get out in a hurry.”

But rather than going through the hassle of making a 3-point turn and going to a more crowded crossing, I simply moved my car as far to the right of my lane as I could, making it possible to do a slightly quicker U-Turn, if for some reason it became necessary.

Immediately after doing so, a cruddy-looking car turned onto this road and pulled up slowly behind me. But rather than stopping the usual distance back from my car, he creeped up and bumped my rear bumper with his front. It was incredibly obvious that this was deliberate. Just hard enough to be a bit of a jolt, but not enough to do any damage to his vehicle or mine.
The driver then proceeded to get out of his vehicle to look at the “potential damage”, obviously expecting me to do the same. Presumably this would have resulted in a weapon being drawn, either by him, or a second or third person getting out of his car (which I couldn’t see because of darkened windows). This would then result in a robbery and/or a carjacking.

No way in hell I’m sticking around for that. I pulled a U-Turn and hit the gas as quickly as I could to get away from them, then made a beeline to the police station in the other direction. If it somehow, magically was a real accident, then they can damn well follow me there.
The guy made a fake-innocent “Huh?? What are you doing??” motion as I drove away. But not surprisingly, he didn’t follow me to the police station, where I made a report.

Luckily I was able to learn these things without any damage done to my vehicle and nothing lost but a few minutes of my time. But it could very well have been much worse.

Glad it worked out OK! Thanks for sharing.

Think you handled it all pretty well. As soon as you started your U turn your car was likely your best weapon had he drawn and started firing if you felt escape was not an option.

The only thing I would have done differently is call the police in route and told them someone hit your car and may be trying to rob you. Always good to make sure you are the first call the police get.

@Cheetahsneverprosper Thanks for the rundown.

I pocket carry to, but this is my setup when driving. 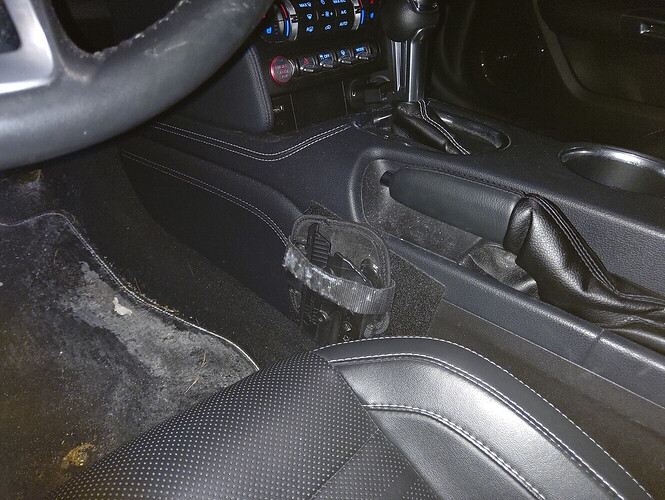 Truly the Force is with you…

Glad everything worked out for the best.

@Cheetahsneverprosper >>> did you ever think of trying to get the plate number
Maybe yes maybe no. Most of the time people never do. Good thing to do is always be able to write down stuff, you don’t even have to get the full marker number

Thanks for sharing. Surely, there are lessons to be learned.

About two miles from my home, an unsuspecting lady was robbed by two women, same tactic, near an intersection coming out of a commercial center.

I’m a lefty and now thinking of how awkward my crossdraw would be from the driver side, IWB at 1 o’clock (appendix carry for you righties).

I would need to practice more righthanded.

Wow, that’s crazy. I’ve heard of that tactic before. The only thing I think I would have changed is, after bumping it to me, when I see him get out of his car and I’m convinced he’s up to no good, Kim’s coming out, in my hand. Other than that, driving away was actually pretty smart.

Glad to hear your alright. I’ve been in much worse circumstance in San Antonio. Fortunately Zi was hyper vigilant and aware of my surroundings. My girlfriend was we ith me. Guys tried to open my doors on both sides but we got in the car sucky and I locked the door in case. Was the right choice. The next day we saw on the news a guy was killed trying to protect his girlfriend from being raped. It happened in the same location we were.

Thank God everything worked out and you were not hurt or killed. You did the right thing by giving yourself space for an escape route. You do learn from these experiences. Stay safe and carry on.

You did well imo, and your assessment of your goods and bads is quite astute. Appreciate the lesson.

Glad you are OK!

Good thinking on the U turn! I bet a LOT of people would have gotten out of their car. Certainly sounds like a setup to me.

Glad you are safe and thank you for sharing. It reminds us all to remain vigilant at all times. Great move on giving yourself room to U turn.

Edited for spelling as should be vigilant and not vigilante…

Brother @Martin36 there’s no way I will remain a vigilante because it’s against the law.

just messing with you brother and have a blessed day.

Glad you’re ok and good thinking on making sure you had an escape. A friend of mine was the victim of that same tactic some years ago. He got out, thinking it was a legit accident, and three guys beat the crap out of him and robbed him. Luckily he escaped with his life.

@Cheetahsneverprosper Thanks for sharing. That was a great example of situational awareness and a good lesson to remember. I have a few train tracks in my area where there is barely enough room to bug out unless you plan in advance.

Thanks for pointing that out…have s great day.

Glad you were aware of your situation. It’s a shame that we have to always think about bad situations as if we’re soldiers in a foreign Country. With that being said I don’t think it’s going to get better anytime soon.

Thanks so much for the reminder! The grandkids need to see this!

Good thinking. Situation Awareness (SA) is critical to survival. When I used to live in Germany we had a very violent gang known as the Baader Meinhof which was very dangerous. With the business I was in at that time, I kept my 357 Magnum with me in the car at all times, ready to pull in a moment, but like you, was very conscious of SA and thus always had an escape route for myself. In a crowded intersection awaiting a light? I left room in front to maneuver. While I had a lot of confidence in the local German Polizei, I dealt with it on a personal level. Self protection comes first. Keep yourself an ‘out’ at all times.