Did Hunter Biden lie on an FFL application for a gun purchase or did he not? That’s the whole issue. If he did lie, then there’s no dancing around it, regardless who comes to his assist. 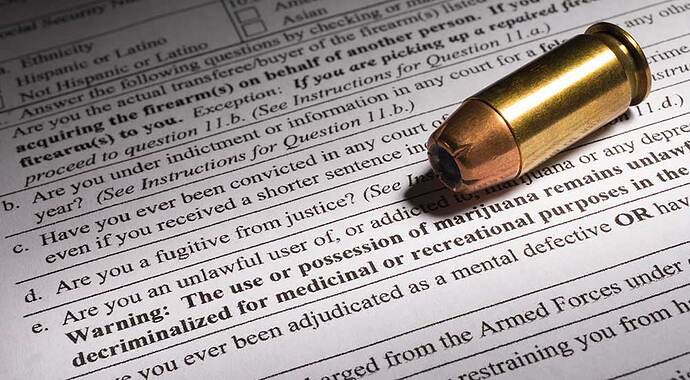 Hunter Biden Ally Should Worry About ‘Gun Crimes’ of His Own

What makes highlighting Brock’s involvement with Biden in this case especially relevant for an AmmoLand report is how both have reportedly flouted gun laws and evidently gotten away with it.

Hunters affinity for controlled substances is greater than my affinity for ammunition!
He’s guilty and he proved it himself on his own laptop!
By default, he renounced his US citizenship! He’s comfortably a citizen of the CCP! As well as his daddy!

It is doubtful whether any federal prosecutor will charge Hunter Biden with any gun crimes involving possession or use of illegal drugs.

Here’s the thing … medical marijuana has been “legalized” in more than 30 states and at least 15 jurisdictions allow for recreation use. But, it’s still illegal as far as the feds are concerned and our do nothing (except for printing money) Congress is unlikely to even debate the issue much less legalized marijuana. That means that gun owners are at risk of prosecution if they are found with any marijuana. If you have a medical marijuana card to deal with any medical condition, better not apply for CCW or buy a firearm.

medical marijuana has been “legalized” in more than 30 states and at least 15 jurisdictions allow for recreation use. But, it’s still illegal as far as the feds are concerned

It is likely still illegal in those states, too, in that it is also a state felony to be in possesion of Marijuana and a firearm - in Virginia that is true, anyway.

Here’s my problem: Leo23, Scott52, Mark697; I’m inviting you all to my home at 6 o’clock moon time, where we will discuss ice crystals floating in space; I think there is something we can do about it. Let’s put our heads together and layout the obvious truths and then go after the more obscure facts or change the facts perhaps. A couple of hours later you guys show up; we discuss the facts and come up an approach to further investigate the truths. Before we can get home good the news blasted that we had a meeting, and this is what we discussed. My question is: Who brought the reporter to the meeting? Why wasn’t that mentioned? How was it that I was unaware of the reporter or that I consented to that resource publishing the meeting?

This is a question. Help me out guys so that I can move along. Who told you, that you could bring a reporter?

are you sure one of us brought a reporter? maybe your house is bugged. just a thought

Wouldn’t it be great if the Hunter lawyer guy wanted to get some facts on the fecor?. Seems like he should be telling little Hunter to stay in the basement until he croaks to avoid an adjoining cell with his dad and Mr. Baldwin.

doubtful whether any federal prosecutor will charge Hunter Biden with any gun crimes involving possession or use of illegal drugs.

wasn’t it crack that he was on? let one of us do the same and see how long we are free
I quit using medical CBD oil that is much better and healthier than the crap my dr has me on for nerve pain. To be able to use my legal right to carry concealed and to be honest on the 4473.
so why the different rules? oh ya my dad isn’t the resident

LOL! My house, NAWWW, say it ain’t SOOO! LOL. How does this happen, why would it, and who would allow it?

So, you see, as I’m reading the reporting, I was caught by the details being given as coming from someone that was in the room. And I’m just…whoa???