Was Henry McCarty - alias William Bonney - alias Billy The Kid - right or left-handed? If you look at his photo, and at the receiver on the Winchester he’s holding, you’ll have the answer. He was supposedly wearing his favorite gun - a Colt “Thunderer” double-action in .41 Colt. FYI - Kurt

Billy The Kid was ambidextrous. 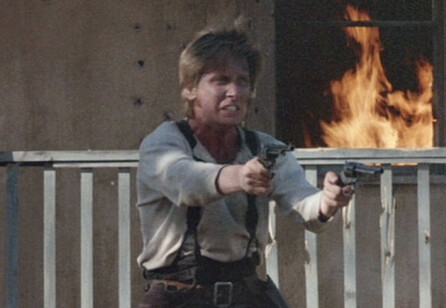 There are very few photos of Billy. Perhaps the one you are referring to is the famous tin-type photo. The way that photo was taken left an “Inverted” mirror image of the subject, Billy.
Here is a good web site on Billy photos:

“He is, in all, quite a handsome looking fellow.” That was the opinion of a newspaperman fortunate enough to obtain an interview with Billy the Kid in...

If memory serves me correctly, these cameras only had one optic lens reversing the image. It would take two to invert the image on the plate and have the “proper” image captured.

Optically made images are captured on the emulsion upside down and backwards, How the negative or glass plate is oriented during printing is what restores the correct order of things. Tintypes however are a bit different. Are the Billy the Kid photos tintypes?

“He is, in all, quite a handsome looking fella”

Recently saw a couple of photos they believe to be him. One has him holding a croquet mallet at a wedding reception and the other is of him playing cards with 3 of his known friends. Probability of it being him by experts is mixed with more yeas than nays. If either of these proves out it will show how really bad of a likeness the tin type is.
That being said, even though photos were quite novel at the time would you give a bad photo of yourself to a friend or lover?

That being said, even though photos were quite novel at the time would you give a bad photo of yourself to a friend or lover?

I like to think that there were ugly men out west sending photos of other handsome men to women out east, trying to trick them into coming out west in a move that would pre-date Tinder by over a century.