What would you do: Stranded on the Side of the Road

Tom Grieve and Kevin Michalowski give you something to think about with this “What would you do?” scenario: 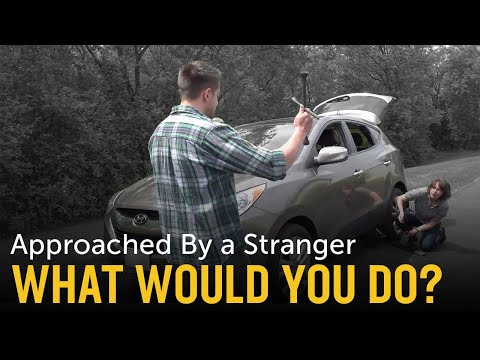 A concealed carry permit holder is stranded with a flat tire and is approached by two strangers. There are many factors you would need to consider before acting in self-defense in such a situation.

What would you do?

Given the scenario as presented.

When the car pulls up in front of mine I stop working on my rig and move towards the “helpful guys” probably stopping at the hood or door of my rig. General greetings and such will ensue. With a flat tire, I have the repair and thanks for your concern but “I got this”.

If the two keep pressing the advance I am going to divide the pie and pull out to the middle of the street and do a “walk around” where now I am at THEIR car and they are at mine. This forces the hand. Are you a good guy or do you have bad intentions?

If on the side of the Highway with 60+mph cars whizing by you may just want to back up away from both cars. If they are there to help they will change your tire. If not they will follow you down the interstate. Then it’s up to you.

This is a good, thought-provoking scenario. The woman does not have the luxury to discuss it like we’re going to. She has to quickly decide what’s happening and respond. If she’s wrong, she could become a victim or even die. Or she could face prosecution, debt, or a lifetime of guilt for shooting a good samaritan.

She should take a page from our LEOs. When a situation could spin out of control, they’re trained to communicate instructions in clear terms using a command voice. Let the two men know in no uncertain terms that they need to stop. If they continue to advance, she can make a much better case that they were threats.

BTW, being black doesn’t make someone a threat. I wouldn’t say that if I had never seen someone use that like a defense.

I would tell them I got this don’t need assistance and thank them for asking. If they persist I would retreat a bit and try to keep an eye on both of them. If they continue to persist, first of all I am out numbered so if they keep coming I would warn them that I have a gun while my hand is on it and maybe they may leave, hopefully. So many things can happen, if they aggressively continue to come towards me I may have to continue to retreat and yell out commands like GET BACK/STAY AWAY/LEAVE ME ALONE, until I can no longer retreat. Then you take care of business.

I’ve filed away your response, hopeful that I never need it, but it sounds like a plan just in case.

In this scenario, the lone lady was put in a vulnerable position; alone in a disabled auto. Strike 1. Without any apparent situational awareness on her part, a car pulls up in front of her car, parks, and a total stranger approaches her undetected in an aggressive manner with a tire wrench over his head. Strike 2. Then another stranger from another direction apparently from the same parked car surprises her within near arms reach of her. She is nearly surrounded. Again, no situational awareness. Strike 3.
Epithet: She has allowed herself to be surprised and compromised.
The odds are stacked heavily against her if attacked at this point.

I would warn them that I have a gun while my hand is on it and maybe they may leave, hopefully.

IMO, a mistake. Disclosing your capabilities to potential attackers is a bad idea, and a “clean” gun may be a bigger prize for the criminals, than anything else they can steal from your person or vehicle.

When people try to flank you, it is a Condition Red. The woman in the video needs to go from Condition White to Condition Red within 2 seconds, and it is very very difficult. Got to pay attention, starting with realization, that a disabled vehicle leaves you vulnerable!

My sister-in-law came out of a store and noticed she had a flat tire, then a helpful guy appeared, then he suddenly lost interest in helping and was gone - and so was her purse from the car. The tire she later found had been slashed.

I beg to differ but this is why it’s a discussion forum. Me warning them that I have a gun may cause them to flee and try and hit another target. But if they decide to persist I have enough confidence that if they did attack I can unholster and take care of business. Everybody handles things differently. Like Dirty Harry would say “A mans got to know his limitations”. I know mine.

First of all, that flanking maneuver by the so called “Good Samaritans” is definitely not an effort to help change a tire. It doesn’t take two guys that size to change a tire! An engine maybe.
Second, that’s the worst possible position to be in when changing a tire, driver side rear. The only escape was right into oncoming traffic.
Third there was clear disparity of force, the big guy flanking to her right and a deadly weapon/object in the hands of the plaid shirt.
She had no recourse in this situation. First she was in condition white, and second, if I heard correctly, she dropped her own tire iron.
If a sweet smile and a negative response on her part does not dissuade the Good Samaritans, (she’s done) John Wick these two fools with the tire iron, double tap both in the chest, reload, single tap each to head.
@MikeBKY, @Dawn and @Zee (BTW haven’t heard from @Zee in long time) are not going to like this, but, bury the bodies in the woods, fix tire, go home, change pants, have drink, learn from this situation.
OR dial 911 wait for clean up crew and note how much time it takes for them to arrive.
Let it be known, their next move would be to get her in their car. WARNING to anyone, NEVER get into the vehicle! Don’t be a missing victim.
Seriously, these days, head on a swivel, be aware, as soon as that car slows down and pulls over, you can hear that, stage yourself, prepare yourself. If they have bad intentions, unfortunately, nothing will stop them, period. Unless you’re armed.
Does this scenario change if the CDC guide lines were followed? Granted they were social distancing, but no masks.

As my colleague @Tom_Grieve explained, there was not enough yet to decide this was a self defense/deadly force encounter. I agree, that the sirens need to be blaring, with possible assailants approaching from the front and side. She needs to be ready to draw but …