And quite a few happen farther than the 3-5 yard majority, as well (plus, people miss at all of those distances, all the time…)

With much less experience on MRDS, I have already experienced a total failure of the internal adjusting mechanism — POI drifting >5MOA from shot to shot, and clear off the backer at 15yd within a magazine. DeltaPoint is not generally considered a provider of junk LARP toys

And there is a reason you never see me recommend deltapoint. They are not considered a go-to pistol mounted RDS

If a sight falls plumb off the gun, you will know instantly what you’re working with — how are your point shooting skills? Harder problems to identify in a crisis are adjustment drift and lost dot. In a fight for your life, you won’t know what the problem is — nor how to adjust for it. You just fail to make hits.

Which is exactly what happens when iron sights fail, some of the time. Look at my personal example. The front sight drifted to the side, some of those shots it was probably off enough to miss but not off enough to notice, then it was way off…it’s no different than a dot drifting.

…and if you’re worried about the dot drifting, buy better gear

If someone needs a laser or a red dot to hit a hand-sized target at 3-5 yards, maybe that person should not be carrying a firearm.

How is “needing” a red dot any different than “needing” iron sights?

Yes, even at 3-5 yards, you should be striving to use your sighting system.

IMO we need to get away from implying, or telling, people that they don’t have to use their sighting system to aim in order to get hits

DeltaPoint is not generally considered a provider of junk LARP toys

And there is a reason you never see me recommend deltapoint. They are not considered a go-to pistol mounted RDS

Soooo… you wanna tell… I just made a bad decision ordering Leupold Delta Point Pro for my pistol?

Just seen far too many (proportional vs common-ness) stories like techs of failures, and not enough tests/drops/tests (abuse) that they make it through. Don’t see many professionals using them vs the big two either.

If durability and reliability are your bottom line, get an RMR is the short of it

That was my biggest concern. I saw Sage Dynamics video with broken DeltaPoint glass… but I took a risk, because I felt better with optics with bigger window.
I can hope that I won’t drop it, but I cannot hope that I learn how to deal with extra frame and small window which seemed to slow me down and disturb my vision.
This is gonna be my very first optic so I was very picky about comfort. I want a smooth conversion from iron sight to red dot, otherwise I may find the optic not usable for me…

I haven’t jumped on the red dot train yet. Probably will give it a try when I can get my finances back on track.

One thing I would want to do semi regularly if I did use one is have a shooting partner turn it on and off randomly between draws so I could practice quickly transition to the irons if I can’t pick up the dot.

Yes, point shooting out to at least 10 yards is not difficult - and faster. We do not need to hit the “X” in defensive shooting, just get within the first two rings - palm-sized hits or less.

Point shooting is a great technique for quick first shot.
I taught myself to focus on the target and take a first shot without focusing on front sight. My Natural Point of Aim is good enough. With this, I’m hoping to have easy transition to red dot without “looking for the dot” problem.

I actually used to be pretty good at point shooting. But the last couple years I have been working more on trying to get a flash picture of my front sight every time. With practice I find it to be almost as fast as point shooting but with smaller group sizes and less random flyers since I’m less likely to outrun the pistol before it gets back on target after recoiling.

…there is a reason you never see me recommend deltapoint. They are not considered a go-to pistol mounted RDS

Darn it, I asked the wrong guy again!

“Leupold Deltapoint Pro and Trijicon RMR are the two most reliable micro red dots…”
I’m not going to go back and look at videos again, but Aaron Cowan didn’t diss DP so much IIRC.
DeltaPoint Pro
DeltaPoint Micro
DP vs RMR

Anyway, I got my money back, and put it into a Holosun 507K. Fine & dandy — but it will be sitting on the bedroom gun until until

brings me a slide cut gun.
[I’m pretty much in charge of Santa’s budget, but candy canes is about what’s in there.]

I use a laser and a red dot. If you go the laser route, go green (as I’m sure has been said). I do have some issues seeing the red in daylight at even short distances. I prefer red dots to lasers, but being able to aim and activate a laser from any stance, shooting from the hip if you have to, for example, that laser indicating the location of your shot is nice, whereas a red dot requires you to bring it to eye level. The best, of course, is being able to point and click without sights (practice practice practice). This is where a laser helped me out a bit. Brought up the empty pistol, laser activated and saw where my natural aim point was…ugh. But it’s getting better.

Get rid of the gadgets and practice with iron sights

That’s where I keep landing when I think about outfitting my EDCs with tech. I personally don’t want to depend on anything with transistors in it when it comes to stopping a potentially violent threat. Primer + Powder + Projectile is all I need or want.

With my iron sights on my new Canik, I can already hit consistently within 4” of center target at 17 yards. That’ll only get better.

Most of us have probably seen this picture or some variant already. What kind of sights to you see? Not a single red-dot to be seen. (And notice one guy with his finger already on the trigger!) 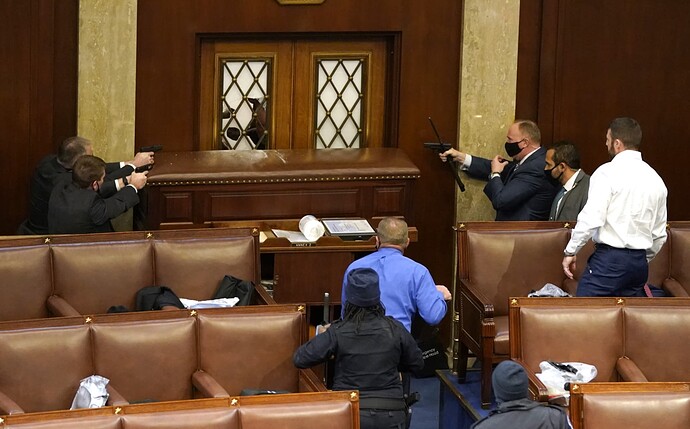 So what you’re saying is, clearly, Glock is the only choice 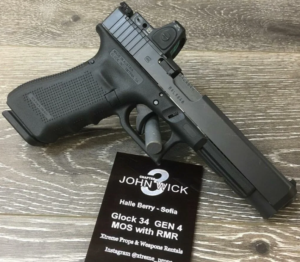 I installed a laser on my Glock 42. My logic was for quick target acquisition.

In practice, at the range, if the pistol is not held as I was taught, and in a way I’m accustomed to, then I would miss the target. I’m sure that practice would resolve this.

I will say that the laser is great for training, as at does show new shooters how unsteady their hands can be, and what happens when they anticipate the recoil (even when dry firing).

I also have a Hellcat with a red dot. I do find I am quicker at target acquisition, and more accurate, possibly due to being forced to sight properly prior to shooting.