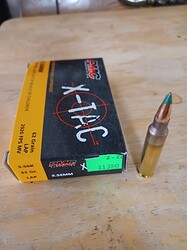 PMC is known to make consistent, reliable ammo. The xtac in 5.56 is fine ammo.

The K designation is probably meaningless to us.

The 62 grain green tip LAP (light armor piercing) is a lead and steal bullet with a copper jacket. It’s basically the same thing as M855 or XM855, or SS109. Some ranges don’t allow it as it’s supposedly harder on backstops and/or has an increased risk of fire caused by sparks due to the steel portion of the projectile. It also, on the whole, seems to be a little less accurate than the 55gr FMJ supposedly because of nuances in the even distribution of the steel within the bullet and thus yada yada

Haven’t used that particular load but have had good luck with other PMC ammo. As long as your rifle is rated for 5.56 you should be good to go.

With the green tip that is likely a steel core bullet so you wouldn’t want to shoot them at steel targets unless you really want to beat up the targets.

PMC has been my go to ammunition for all my firearms for the past 15 years! For practice only!
Great prices, excellent accuracy, always purchased in bulk! Until now!
For self defense it’s Hornady all the way!

Also a bad idea to shoot steel projectiles during fire season (now 12 months in parts of the country) at outdoor ranges which are not free of combustible material.

It doesn’t take incendiary rounds to set off a big one in the right (wrong) conditions.
Maybe there will be such a thing as a non-sparking range…?

That’s an excellent point. Around here, out in the desert, some days all you have to do is look at that grass and it’ll start on fire.

look at that grass and it’ll start on fire

“So dry out when I rolled a coke bottle across the lawn it went off like a Black Cat!”