I think we are done here. You are definitely not a person ready for discussion nor somebody who can share opinions.
I’ve tried to understand your point of view… but to be honest, you haven’t given any reasonable explanation other than grumbling on Sheriff’s Office Deputy.

If you know the solution, just share it with us. It is so easy to negate somebody’s action if you are not in the same situation. Just try to understand both sides, do not judge based of your thoughts, do this as reasonable person. What reasonable person would do in LEO’s position?
Once you get the answer - please share it here.

Yep. Could be. Sounded to me like the resident was definitely speaking directly and defiantly in response to the deputy’s deescalation efforts. But the sound recording wasn’t great, and I only listened one time. The actual nature of the interaction will be figured out. Could also be an issue with dementia — that shows up from time to time. Or intoxication. Or woke up too slow from sleep. Or just a bad attitude. All kinds of possibilities could explain why only one of the participants was working on peaceful resolution — doesn’t really matter. One-sided negotiation is not really a thing.

Whether there might have been some better or longer retreat path in the maze of an unfamiliar house hardly matters — the armed resident did not choose to hold when the threat pulled away, but continued to advance and display ability, opportunity, and jeopardy until and when the deputy had no further to withdraw. Going down an open stairwell with an armed threat above is tactical suicide, not an avenue of retreat.

This could have and should have turned out better, but not through any rational action of the deputy that I can see. I’m not looking at hard data, but I am comfortable arguing that more lives are saved by welfare checks than are lost.

Elza appears to be trolling. He or the treads won’t last long under the circumstances. Wonder which?

Since when is a differing opinion trolling? You seem to be a good example of why there is a disconnect between law enforcement and the public.

after watching the video a few times I can give you that… however, I still cannot get over that she was in HIS home and he had committed NO crime. I also saw a door she could have shut and barricaded (assuming the guest bedroom was furnished). This is what I’ve come to… I’m not going to second guess the officer on scene… unless something significant comes out ins an investigation.

There is a fine line between “wellness check” and an invitation. I’ve listened a couple of attorneys on youtube discussing when a wellness check turns into a violation of rights… its a tough one… but she was still in his home… at the risk of more insults from jerzy and steven288… i’ll say this… she should have done anything to keep from killing this man… including shutting and blocking the guest bedroom door. Having said all that (for the last time)… I wasn’t there and I’m done second guessing. We can only hope some good will come from this for future wellness checks.

Show me just ONE

The homeowner could have retreated down the stairs or back into the bedroom but he didn’t do that. Those who say he was defending his home are correct. But what you CAN do and what you SHOULD do are often two different things. The deputy was just as justified in being there and doing her duty as instructed. She retreated, the wise thing. The homeowner advanced, something he legally could do but not the wise thing. He did what he COULD do but it cost him. What he SHOULD have done is retreat. It was an option he chose to reject and it cost him.

After watching the body cam video of Deputy Castillo, it is apparent that she did the best she could. The old homeowner committed suicide by cop, in essence.

The homeowner did NOT follow instructions. Why? At 88 is is likely his hearing was bad; maybe he did not have his hearing aids installed. It is also likely he had some degree of dementia or alztheimers; since he left his garage door open for 2 days, and could not or would not listen to the deputy’s instructions.

I commend Deputy Castillo on her conduct.

The old homeowner committed suicide by cop, in essence

I don’t think it’s a proper term for his actions.

It might’ve helped if the officer used his name, instead of the impersonal “Sir.”

…if the officer used his name…

That can be helpful — if there is only one person, and you know the name.

When investigating a neighbor report of open garage door, that might not have been available or sought by the officer. Once surprised by an active threat, “respectful” address is about all you have. A wrong name might be worse than no name.

At the moment of encounter, it’s not clear whether the officer would know they had contact with the resident or the felonious nephew — with bodies still to be discovered behind Door #2. “Man with gun” may have to remain “man with gun” until things settle out a bit.

At the moment of encounter, it’s not clear whether the officer would know they had contact with the resident or the felonious nephew — with bodies still to be discovered behind Door #2. “Man with gun” may have to remain “man with gun” until things settle out a bit.

Even though the officer was there on a welfare check, the elderly man was in his own home. Yes , he was armed and rightfully so . Neither could see the other.
My question is , Why was her weapon even drawn ? I feel that she had several opportunities to safely withdraw from the[⁹ man’s home. Obviously, he was Very Much alive. He even responded to her , verbally warning her that he would " Blow her out of there". He wasn’t advancing on her, so why was she so hellbent removing the threat? He Obviously couldn’t understand what she was saying to him. By his verbal responses, he was aware that someone was in his home, but not clearly understanding " Who ". In his mind , he was being threatened,by her presence , in his home.
So where was her deductive reasoning , as a police officer? So he’s armed, he has every right to be. Even though she was performing a wellness check, she had no right, to shoot this man. I feel that she should be suspended and charged with first degree murder ! If it would’ve been anyone else, they should would have been !⁹

@Matthew245 , please watch the video carefully and you will find answers to your questions:

Why was her weapon even drawn ?

Because the man showed himself with a firearm in his hand
.
.
.

He wasn’t advancing on her, so why was she so hellbent removing the threat?

He wasn’t, at the very first moment only. Her response to the situation was typical for everybody - backup and find the cover. She was not going to remove the threat, she went back to safety.
.
.
.

she had no right, to shoot this man

Nobody has a right to shoot other person WITHOUT the reason. Unfortunately that man gave the reason to be shot.
.
.
.

I feel that she should be suspended and charged with first degree murder ! If it would’ve been anyone else, they should would have been !⁹

That is your feeling, you have rights to express it… but even she took man’s life she did everything she could to make the situation safe - that is the most important here - MAKE IT SAFE.
That wasn’t a smalltalk situation, they both had firearms it their hands… and unfortunately for that man - he showed the firearm FIRST and he was advancing her.

Just wanted to make a point, if an LEO entered my home under any circumstance, properly identified and is in uniform I will comply to what ever he/she says and sort it out later. If the LEO is wrong after the fact I have the option to sue. But I will still be alive.

Police are not going to leave without killing somebody.

Lets hope you never need one. 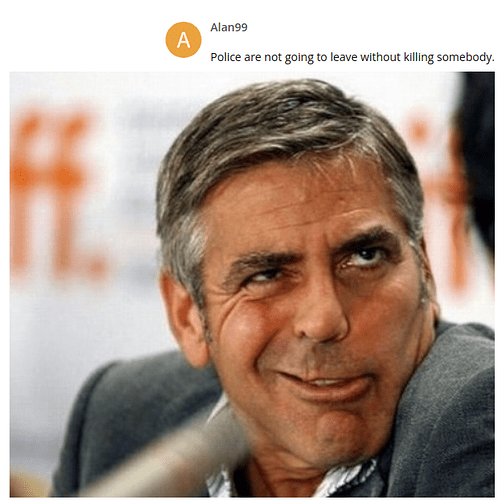