New Shooter Monday: When Should Kids be New Shooters 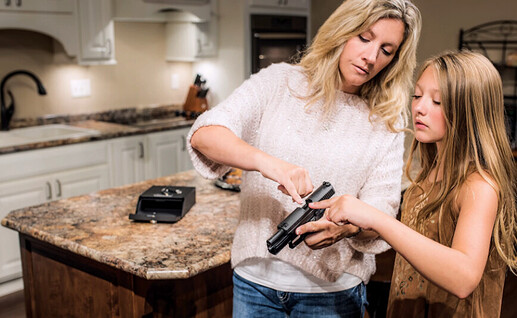 Every child develops at their own pace. Some will mature faster and some will always have a young, playful demeanor.

What milestones do you look for to help you determine when to teach your children about firearms?

When they are old enough to show true responsibility and I can trust them. But for me no younger than 8. Learning about guns at an earlier age but actually shooting I’d say 8

When they can properly hold, and operate the firearm you intend them to use. I started my son at 5. I also coach 4H rifles. Kids can join at 10.

I started my Son at 8 years old with a BB Rifle. Once he was old enough to take and comprehend a Hunter’s Safety course at 12 years old, he went through that and passed. We went hunting for Ruffed Grouse/Partridge that same Fall/Winter when I gave him his first 20 ga. shotgun.

The milestones that I looked for were:

-Desire to learn from someone other than a parent in s structured class (Certification)
-Respect for the destructive power of weapons (Maturity)
-An actual desire to handle a firearm. Some children may not want to handle firearms and they shouldn’t be forced to do so. (Self-autonomy)

It varies so much from child to child that I hesitate to put a hard age on it. I started learning the concept basics at about seven years old and actually started shooting at eight years old. By the time I was ten, I was able to take the .22 LR rifle on my own and shoot on our property.

With my kids, I carried a sidearm daily for work so the basic rules were taught very early and the mystique quickly faded since they were exposed to me having it in a holster at least five days a week. My middle son wanted to learn to shoot so I followed the same pattern my grandfather had used. By the time he was ten, he was shooting rifles in a variety of calibers and a .22 LR handgun. He always behaved responsibility and understood why the safety rules were in place.

The other two kids weren’t interested in learning so I didn’t push things. My middle son is now twenty-five. He is a gun owner who has taken advanced training, safely handles weapons and is a damned good shot.

Welcome @Stan30! Great people here! I don’t have kids, but I believe I was 6 when my dad showed me his service revolver. He went over firearms safety and shortly after that we shot BB guns, onto .22, 410, etc.

I became a gun owner at age 45 and brought my family to the range immediately after. My kids were already teens at the time so I’m now looking forward to introducing grandkids to shooting. When they’re able to memorize the basic safety rules, that’s when I I can say they’re old enough.

I started my boys on a super safe bb gun when they were 7 and 9. The rifle had a pump that could only be pumped once, a safety that engaged every time it was pumped, and the bb had to be manually loaded via a bolt from a small reservoir. They would come to the range with me periodically and police my brass. Drilled safety into them for years before they fired their first real firearm as members of a junior rifle team.

Welcome to the family @Stan30 and you are blessed to be here.

@Stan30 Welcome to the community. Lots of info and input here. Stay safe

I personally started my son at 5. The shooters at the local USPSA club were very accommodating. He was running course of fire with his cap gun and airsoft, green gas, sig at the age of 6. He was held to the safety rules just as the rest of us the shooting club members were great. Would score him with rings on steel and the pellets would stick in the cardboard. 8 he shot a s&w 4122, and a Glock .40 cal at 10 years. Just our story.

Welcome to the family brother @Stan30 , glad you could join us.

My Dad started me out with a BB gun then a Pellet gun & I got my 1st 22 rifle when I was 10 years old. He was all about gun safety so I had to treat my BB gun as if it was a 300 mag. Years of gun safety was drilled into my head so it was all there when I got my 1st real firearm

I introduced my son to the concept of firearms and firearm safety shortly before he turned 5. We live in a rural area where some people seem into leaving their firearms out and about so didn’t want him finding one and playing with it at a friends house.

He is 6 now and I have been waiting for him to mature a little more and show some consistent interest before taking him out for his first lessons. But he has been coming home from school occasionally with some silly ideas of what guns are all about. So I will likely need to pull out the BB gun soon and get him some real experience before he gets too much fantastical schoolyard info stuck in his head.

Acceptable level of maturity and the ability to follow instructions. My son started at 6, my daughter at 4 1/2 because at that age she was a little old lady in a kid’s body.

My philosophy is that if you take the mystery out of firearms they will be less likely to try to sneak around to get to them. By the time they were 10 they were SICK of shooting guns, and firearms where no more interesting than the kitchen knives to them.