I was wondering if anybody has any tips for shooting a handgun with a laser sight. I just tried out my 9mm last week with my red laser sight and for some reason my handgun seemed a little jumpy while using the laser sight. I wasn’t focusing on the iron sights just the laser. I can handle the recoil just fine when I’m using the traditional iron sights but I was all over the target when I used the laser. Any tips on how I can correct this? Thanks

The grouping at the top was when I fired without the laser sight. 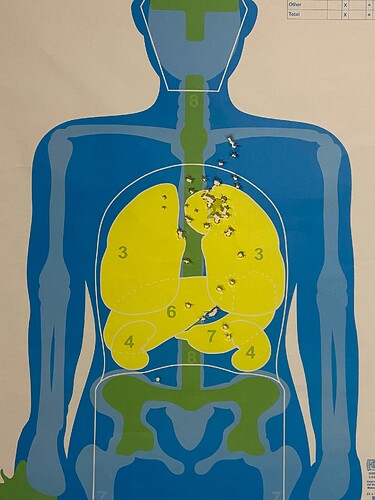 I’d try dry firing with the laser and see if the beam is bouncing when you pull the trigger. No laser sights on my pistols, but noticed movement on a subcompact using my laser bullet (ITarget pro) so worked on my grip with that gun.

It’s easy to jerk your finger when you see the dot. It’s like a lack of follow through. Remember, you are seeing the dot before the bullet would actually get there, so the brain thinks the shot is over before the projectile actually would have left the barrel.

Lasers can be tricky because it appears we bob around more than with irons. In reality, we don’t; lasers reveal the bobbing while we just don’t see it with irons. And when we try to “steady” the dot we seem to just make matters worse because of the tendency to jerk the trigger before the dot squirms off target.

I like laser sights but when I was talking to my friend Steve about them he said don’t get over confident or rely on them exclusively without the irons. In all reality all laser sights are good for is having to shoot at night but I probably wouldn’t shoot them without using a flashlight. My accuracy is much better with the irons because it forces me too focus when I pull the trigger.

You must remember about deviation that exists all the time. Farther your reference point is - more movement of it.
Your red dot or iron sights are relatively close to your eyes, so it seems you don’t see any movement. But the movement exists all the time. You are not a vise to keep the firearm completely immobile.
The laser point that you see at farther targets will move no matter what.
A bit of movement of your muzzle may result in up to 6 inch at 20 - 25 feet.

So no matter what you do, when you focus on the laser dot at the distance… it will be jumpy, resulting incoherent grouping. 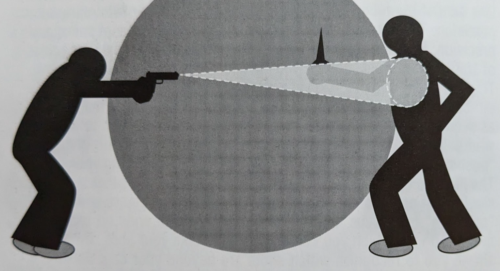 To be honest, laser is a great tool for a single, precise shot from the distance or if you want to scary a bad guy without shooting him.
It doesn’t do a good job for self defense and multiple shots.

I can see how that would make sense in a self defense situation. That does make sense. Thank you. I was shooting from 5 yards away when I fired at this target.

@Jerzy has the right explanation about deviation as a function of distance. Exactly the same amount of subtle hand motion will appear as negligible when focused on iron sights, or seeing red dot while focused on the target, but will seem scary wild when focused on the laser dot on the target.
As for using a laser dot to scare a miscreant, bad dudes looking at you will not see the laser dot on themselves; someone has to call their attention to it.
Final comment: I put lasers on two revolvers about 15 years ago. I discovered I shot them better at the range when using the iron sights than when using the lasers.

No matter what is the distance… the laser dot will always move. When you focus on that moving dot, your group will never be tight. Smaller reference point - better group. That’s why we should focus on smaller possible element of the threat.
At 1 - 3 yards… it really doesn’t matter.
At 3 -5 yards… we just aim at the center mass
Above 5 yards - pick the small part of the threat and make it a reference point (fe. logo at the garment, belt’s buckle, etc)

The reference point should be moving with the target or threat, being the part of it, not corresponding with your movement (like laser dot).

FWIW, I’ve got a laser on my J-frame revolver simply because snubby revolvers are frequently equipped with diminutive sights that can be difficult to see under difficult lighting conditions.

Considering the short sight radius and the inherent challenge of shooting these guns accurately with the typical rear trench-sight, I found the laser grip to be both simple to use and more accurate beyond 10 yards.

But as mentioned above, it doesn’t ‘seem a little jumpy’ when using a laser, that’s how you are…when you use a dot sight or laser you get to see better what you are doing the gun. Consider it a diagnostic aid

I really appreciate all the replies to my original post. Thanks you guys.

I think the problem when I’m shooting my pistol while focusing on the laser only is that I’m slapping the trigger. I just tried dry firing the gun with a snap cap and if I have a smooth trigger press the laser doesn’t bounce at all.

I have a sneaky suspicion that You already know the answer to the question you ask.

I really wanted to avoid saying this…

please work on your grip 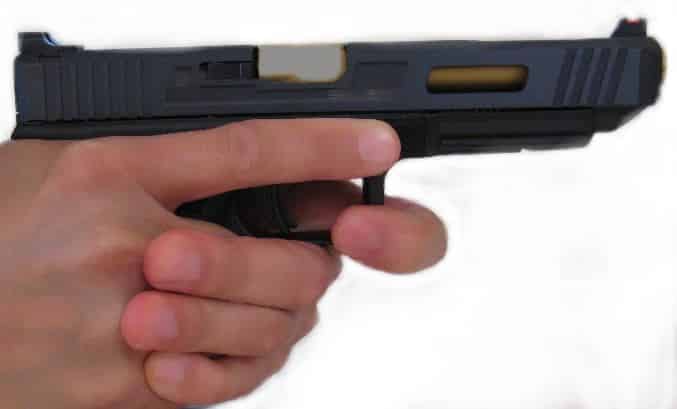 you see… if the handgun would have the laser installed - that grip would gonna be perfectly established. 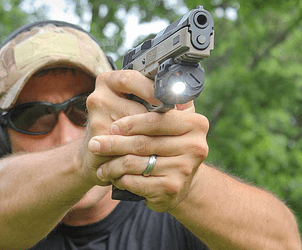 Laser sights are not like the movies. It wasn’t the handgun that was jumpy, it’s your heartbeat, breathing even your eye movements.
Ditch the laser, focus on the front sight!
I started with a Crimson Trace integrated grip laser sight, pretty cool looking, no doubt fun to shoot, then I got real serious on self defense and tactically, it’s a distraction! IMHO

My first foray into EDC. 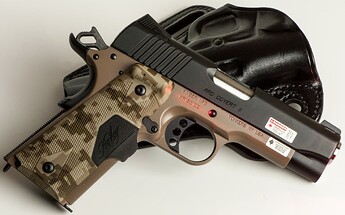 FWIW I have read books and blogs by, attended classes with, watched videos from, competed against (or simply watched compete), a lot of professional shooters, professional BTDT .mil and .le, a lot of competitors…and I can’t think of a single one that uses or generally recommends lasers on handguns for self defense

Just my opinion! I don’t use lasers because they seem to be so sensitive that every little breath or even when you think you’re being still they still reflect every little every little body function. They always just jumped around terribly for me so I don’t use them much prefer just a Green Dot or iron sights.