How to keep from shooting each other

That is a good question and thought process, with[out] surefire answer.

My personal plan is not to draw until I know who it is I intend to shoot or need to imminently shoot if things continue, and if I do engage a shooter with my firearm, get it down at my side if not back in my holster ASAP and attempt to verbalize something like “are there any more” or “is s/he the only one” or simply “CALL 911”.

I practice looking around (yeah, the owl neck) after firing to break tunnel vision, and hopefully if there is a cop or other armed citizen, I can see them and be sure to somehow communicate/display that I am not a threat/am a responder, dropping gun, raising a hand, speaking to them, whatever.

It has been covered, Communication in different ways is how we communicate. Hand gestures and eye contact are a part of communicating too/

a. This is where if anyone comes to the shooting situation will have to acquire where the threat or threats are.

I’ve seen armbands that pull down into a highly visible sleeve marked church security. The members should know each other on sight and the congregation should be briefed on what to expect, do and not do during such an event. Of course the plan more often than not goes away after the first shot, but some practice scenarios with congregants present would be helpful. The reality is there are plenty of blue on blue examples of police or military shooting each other, so it is a very real factor to consider in implementing your security plan…

After an active shooter has started murdering people in the church, when probably there are more armed security team members than there is the shooter, and the shooter is ready willing and able to shoot anybody and everybody especially if that other person has a gun…I can see how pulling down a highly visible sleeve to avoid security team or congregation members wrongly shooting said security team member would be a net benefit. I mean, we’re talking about a time in the scenario where the person with the visible pulldown probably has a gun in their hand, right?

But otherwise, if it was just an always-on thing, I"m with you 100%. Bullseye for sure

Interesting how liberal media quickly swept under the rug the shooting at a So-Cal church, possibly because the perp was a pro-Beijing Chinese who targeted a Taiwanese congregation.
It was a Presbyterian church and I’m surprised not a single member was carrying. Could be an Asian thing.
Before anyone reads something I didn’t write, it wasn’t meant to be derogatory.

I would have to imagine, there is a fairly obvious way of figuring out who is the active shooter vs others.

For us, It’s all about prior training with each other prior to any services & knowing where others are seated on the volunteer team. If another person begins engaging after an active shooter situation is in progress, we use our best judgment & determine if he/she is firing at the actice shooter or is an accomplice. We pray for guidance before the service begins & lean on our faith & our training. All of us are ex law enforcement or military.

But how to stop the non-team armed CCW holders from shooting the good guys, that’s just troubling.

As part of the HOW training I teach, congregants are instructed to hit the deck, get immediately on the floor and stay there. Most HOW mass shootings are over in less than 15 seconds. This leaves the security team standing and the bad guy(s). (of course a few others as we refer to as “pop ups”).

With this said, there is NO WAY you’ll have 300+ congregants leave the church hall in less than 15 seconds. You do NOT want them up and running around.

I’m guessing this could be a problem! 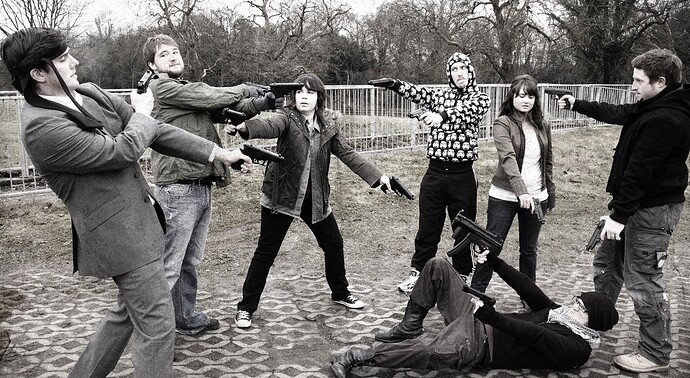 Except in real life, the bad guy won’t stop shooting! Then it should resemble this… 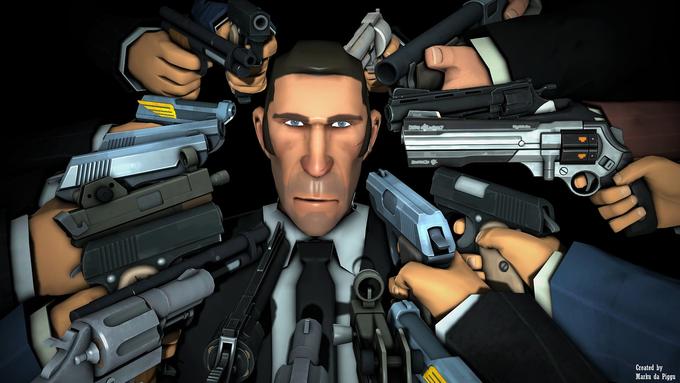 If you hear gunshots and see someone heading towards the gunfire while telling people to run or take cover, I’d assume that’s the good guy.

As they say, always know your background, and what’s behind a target.

My church is just starting a team, so i have been in contact with other teams in the area. One church has a no firearms policy on their campus, except for the security team. I think if they knew there is an armed team, most responsibly armed citizens would obey such a policy.

The team could have those snap braclets that are reflective and say “Security” on them to help stand out when the cavalry arrives.

Good question. I guess you have to make yourself known as a “good guy”. Hopefully any other armed citizen will also recognize you as an ally not an enemy. Since your not shooting at other people randomly, like the shooter( assuming there’s only 1), and from the direction from where his shooting is coming from; you should/hopefully will be seen as a “good Guy”. Personally If I heard multiple shots from different directions I think I would find cover, try to determine what I’m up against, then decide whether to fight or flee. That’s assuming I’m alone and not with my family.

If it’s a long gun, very likely the bad guy.
If it’s a handgun and it came out of a holster, probably good guy.

Except that most armed robberies and shootings are, by far, by handguns. The FBI UCR data clearly shows that to be true.

Also true, the deadliest school shooting in the US was committed with two handguns

I carry an NRA hat with me in the car and if have to get involved I will wear that hat while carrying towards the situation. I would then after the event either lay down with gun under me or put up my hands with gun under foot. I dont know if this will work but thats my idea

Don’t shoot unless you know the target.