AR-15 Taken to Protest at the courthouse of Rittenhouse Trial

Ok, who else feels the person carrying a AR and decked out in flack jacket is a little in the wrong?
I think this also doesn’t help people who do things the right way in showing our beliefs.
This will give extra leverage to those in WASHINGTON who are working to disarm American Citizens.
The right mindset and physical training, training and more training is what we need.

Then what are you training for? No, I do not think it was even a little wrong. He did what the Police, mayor and our useless governor should have done and the citizens of Kenosha should have done. He shamed them all.

This article has nothing to do with Rittonhouse, it has to do with the person coming to the trial courthouse with a weapon.
Get that clear.

Guys,
Please at least use proper names of people we try to support…

and decked out in flack

Hmmm free country, folks have a right to be as foolish as they wish…

The fallacy in your comment is that The left will are using anything they can… Kyle neither added to nor took away what these thugs will do… as the prosecutor so aptly shows. He took a LEGAL weapon for him to carry, unlike the others who carried weapons they weren’t LEGALLY allowed to carry. IF THE POLICE WERE DOING THERE JOBS NONE OF THIS WOULD HAVE HAPPENED. Your attention and vile is towards the wrong person.

VIRTUALLY EVERY DEATH, DURING THE RIOTS, WERE BECAUSE OF LAW ENFORCEMENT’S FAILURES… PORTLAND, SEATTLE, SACRAMENTO, LA, NYC, MINNEAPOLIS, OMAHA, ATLANTA AND DOZENS OF OTHER FAILED DEPARTMENTS… It has nothing to do with Kyle or his AR.

BECAUSE OF LAW ENFORCEMENT’S

Blame Leo’s or whoever made them stand down, I think the latter…

So, it was “Maserati Mike.” 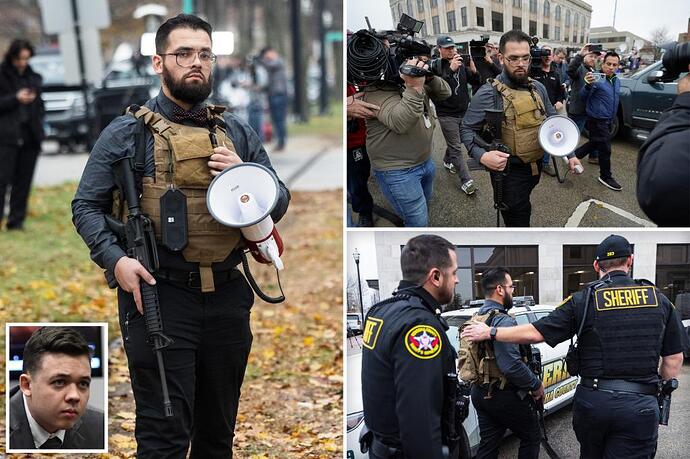 The man, who referred to himself as “Maserati Mike,” arrived carrying a megaphone in addition to the long rifle and what appeared to be a bullet-proof vest.

Right? Wrong? What law(s) did he break?

As far as I know, Antifa and BLM thugs have committed actual crimes compared to Mike.

I’ll give him a pass.

LE generally has a strong union backing them. I would think law enforcement could do their job, and let the union deal with the consequences of disobedience.

My point remains. And I’ll bet that no leo’s family went unprotected. I stand by my assessment.

Of course & I by mine. It’s good to have an opinion…yes

I don’t disagree with your opinion…but leos didn’t have to obey… when I was a cop I’d never leave people unprotected–to the best of my ability–as I once told my son…there are some things worth dying for.

This is a legitimate question that I’ve been pondering. The one dumbass admitted under oath on the stand that he pointed the gun at Kyle first and then Kyle aimed and shot.

Question 1: He was threatening Kyle, believe he was saying get his ass, kill him, etc. Then he brandished a firearm and pointed at Kyle. How is this guy not in prison? That is a felony is it not? Yet that dude is on CNN and other talk shows. Bias much?

I shouldn’t be surprised based on what I’ve heard from the prosecutor in this case.

Good points about the felon having a gun not being charged… I had not thought about that.

Just my tin foil hat, but the prosecutor WAY overcharged on this case.

If anyone is to blame for all of this, it’s the current administration and the communist media, period. The ashes and the blood are still dripping from their crooked fingers.
Like I’ve stated earlier, an acquittal gives us a few more months to fight for freedom, a guilty plea will be the torch they use to literally burn the U.S. Constitution! So don’t be surprised if you think it’s snowing, those are the ashes of the way of our lives!

I think that point really gets missed in this case. The case is not just about Kyle but rather also about one’s ability to defend their self with lethal force if no other option is available. It’s clear as clear can be this was self defense. One would have to not heard one thread of the actual trial or just be a straight Communist to believe he’s guilty. They have nothing on him. When the prosecutor moved to use him and his buddies playing Call of Duty to relate him to being a murderer, the case was long over at that point for the prosecution.

The end all be all with this case will be the root of the issue DID KYLE HAVE A SELF DEFENSE CASE for each one of the shootings? Each will be judged on their own merits and I doubt the totality of the event will be taken into consideration. The issue with better video that the prosecution had vs the defense is another trial in itself. Me thinks the lawyer doth protest too much about his ability to understand modern electronics. No matter what the result Kenosha will burn, that much has already been foretold by the MSN. If he is acquitted there will be a riot. If he is found guilty of a lesser charge there will be a riot. If he is found guilty of all charges there will be a riot. If he is dragged out on the front step and hung there will be a riot. There will not be different rioters just a different chant. The instigators are on the ground looking for anyone to join the cause to loot, pillage and plunder. I’ll get in trouble here after but I’m thinking a well trained Marine with a 240G would set the whole nation of anarchists back on their heels. Or so I’ve heard.

The only potential positive outcome is that Kyle is found not guilty on all charges and sues the f out of the media and maybe even Biden. I agree Kenosha is in for a ■■■■-storm of great magnitude. The truth no longer matters in this country but rather only optics and who has the loudest voice which unfortunately is the DNC and MSM by a considerable margin.