From where I sit out appears ammo prices have stabilized at about double pre-pandemic rates but availability has improved quite well.

I doubt per-round prices will drop much more due to raw material costs, shipping (everything takes fuel), wars and rumors of wars, etc. My crystal ball says we probably in for another drought in the near future.

My perspective is solely based on the calibers I shoot, so your experience may vary.

I have no idea why I’m curious about this, just am.

From what I read (steelcityammoco.com, sgammo.com) prices will be going up again somewhat.
I had a panic attack the other night, worried about my 5.56 supply, and if my attack had actually been reality based,

, I’d be grabbing some .223 as it’s 38/41 cents a round for brass cased from a couple suppliers I’ve used and been happy with in the past (ammo valley, freedom munitions).
I still shoot weekly,generally 4-5 guns, but finding I’m happy with about 30-40 rounds through each of my 5.56/.308 guns, and between a mag of 10 to a box of 50 through each center-fire pistol…though I will admit to exceeding that a few days ago with my 1911 and M9, as the new plates at the plates range at 25 yards were pretty addictive.
Some weeks I just shoot .22lr, pistol and rifle. 500 rounds cost $15, as I listened to my wife when Hillary got nominated.
Crazy prices these days, made a couple sizeable purchases since covid came to town, relative deals and somewhat subsidized by selling some other ammo that I’d gotten great deals on pre covid.

I am buying 9mm target rounds for about 17.99 a box of 50 and home defense rounds for around 25.00 a box. It does limit how much I shoot now but I normally buy two boxes a week and shoot off one and stow the other for a later date.

My training rhythm haven’t changed. One range visit per week is a must, sometimes I’m glad I can do more.
What changed - less bullets, more dry fire, but amount of time and trigger press stays the same.
I also added 22LR to my training whenever I don’t need to feel recoil. It saves a lot of $$$.
I don’t think stockpile would help me. I’m keeping constantly around 2k of 9mm target ammo for current needs. I still have a lot of 22LR from “pre Covid” times.
I don’t see any ammo shortages, price is not so bad. Could be better, but nothing to complain.
Anything at $0.3 per 9mm round is a good deal these days.

Probably all those things, plus new shooters and supplying for new guns. I don’t know how to weigh a million new shooters buying two boxes of ammo against ten thousand old shooters stockpiling tens of thousands of rounds… But they’re both in there. Plus Vlad-induced demand and concern.

Personally, I am shooting less during the past 12mo — partly due to cost of replacing shrunken stockpile and partly just bad weather and competing priorities. I have augmented supply of factory ammo at 2x prices, but have relied upon reloads for most practice and components at 4x prices are still pretty tough to swallow.

I must now pay more for a single primer than the full cost of a full round of 9mm pre-panic. Seeing little relief on the horizon, my anxiety about follow-on panics/shortages did finally induce me to bite the primer prices in order to bring my inventory back in line with other components in-hand. Combined with old stock bullets, powder, and brass, I can reload 9mm for about the 2020 price of factory FMJ — which is better than more pokes in the eye with sharp sticks.

Personally I have shot the same, just as I normally would, and want to, for years, without regard to ammo price or availability.

I was scarred enough by the 2009 shortage that I made sure to have enough to do my regular shooting for at least a full year with only what I have on hand. That lets me cruise through the worst of it.

…I made sure to have enough to do my regular shooting for at least a full year with only what I have on hand. That lets me cruise through the worst of it.

I thought I was in good shape with a two-year inventory. Two years later I can see the bottom of the barrel (or down the empty barrel?). I started trying to push farther out as the cliff became visible, but primers were the first to go and I missed. You can’t make much of a load with bullets, powder, brass, and a press.

Pre-pandemic I averaged maybe 100 rounds/week of 9mm and kept 1500 on hand while restocking my preferred brand depending on prices. It was always available and fluctuated a few pennies per round.

Later I did the math and realized at that rate 1500 was only a three month supply and set a goal of having at least enough to last one year.

This past year or so I’ve tried to limit my range trips to 50 rounds a week and supplementing with another 50 or so rounds of .22lr.

I’ve also increased my purchases to any decent available brass 9mm based on price, including shipping, and spare change availability. I don’t reload and don’t plan to, so that’s not a factor.

I think I’ve made it to my one-year inventory goal and will press on for an additional year.

I’ve seen multiple ammo droughts since I became a gun owner nine years ago but this recent one does not look like the others. I still have .22LR from the first one.
I don’t see prices going down to pre-pandemic levels.

This one recovered supply more quickly than I thought it would, having experienced the 2009 and 2013 banics. But, there are more overall price increases in the country and world happening this time, so I agree, I don’t see prices going back down to “mid last POTUS’ term” levels. The 2018 era prices were an anomaly and should not be expected to return, ever

The 2018 era prices were an anomaly and should not be expected to return, ever

Not in literal dollar prices, given the nature of long-term inflation. I do expect historical supply and demand cycling to bring relative values back in line with other consumables over time, then surplus, shortage, etc.

The inflationary balloon initiated in the middle of the last administration looks like it will be with us for a while; domestic ammunition demand may not slacken for a while; Soviet bloc ammo imports will not return for some time; global demand and policy support to eastern Europe will affect civilian discretionary access/supply. All of that at the same time says to me: not soon.

Who knows how quickly production capacity will rise to the call? It will eventually. And crises will subside. And surplus will reappear. And the whole thing repeats. I think it’s just a question of timing .

I think the inflationary ballon began inflating several administrations ago and has been increasingly inflated by every administration since.

As to production eventually being increased to meet demand I am not so sure. Think the factories are pretty much maxed out right now so increased production requires significant investment in new factories and machines. Given the current economic instability, that investment is a big risk. Though I’m sure a couple companies are willing to take the risk.

The best chance of prices coming down is for demand to decrease. This may happen when/if people feel they have enough or when the economy fully tanks and no one can afford to buy ammo anymore. 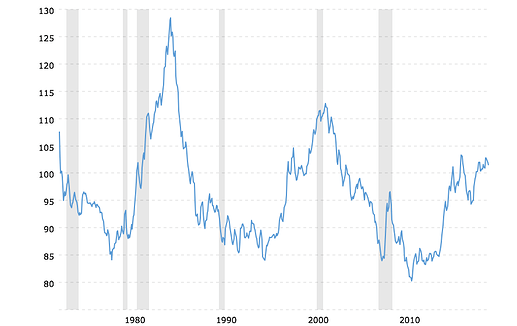 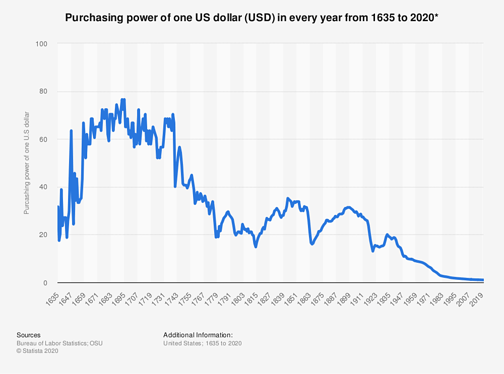 US$ 1635-20201000×743 66 KB
Even more so since before there were “administrations” to come and go.
My observation is not about raw inflation which has been on a herky-jerky one way path since the invention of capital. I was talking about the cyclical nature of generational variation — and about the relative inflation of one thing compared to another (ammo vs groceries, or medicine vs rent, or COLA vs cost of living, or wages).

Picking on USCCA members right at the moment (among other things) is the cost of ammunition and components — even relative to the cost of guns and reloading equipment. Rise in consumables is ahead of even modestly durable goods.

Yes. When I talk about capacity rising, I’m not talking about going faster, or even adding shifts. I’m talking about the investment calculus to build new (or reopen closed) facilities — in response to consumer demand or war production demand or price supports or whatever. If the incentive is there, capital will respond. When capital responds, the demand will eventually be met and then shrink. And then bargains return for whoever among us is still living. Twelve months? Twelve years? Probably someplace in the middle.

I was referencing the deficit spending and money printing of the last several decades that I believe we are just starting to see the fallout from. Also your chart starts just before the 1980s when the government changed the way they calculated inflation in order to mask the consistently upward trend. Prices have risen much higher than wages over that period at least for the typical American.

Most of the ammo that I have was bought before the first run on ammo. I do not believe I have enough time left to shoot all of it. Back before that I was shooting 500 plus rounds of 22 lr 7 days a week, year-round plus up to 50 rounds of other calibers. Did I say that I have a range in the back yard?

Did I say that I have a range in the back yard?

If I had that, I would probably have some serious ammo supply issues as well.

Unfortunately, I do not.

I am having moderate success with those calibers at Norma (direct from mfg.) and TargetSportsUSA. You have to spend time looking and jump quick when you find something. Signing up for email alerts may help.

Handgun ammo is still rare in my area.

Do you live in a state that doesn’t allow Internet purchases or delivery?