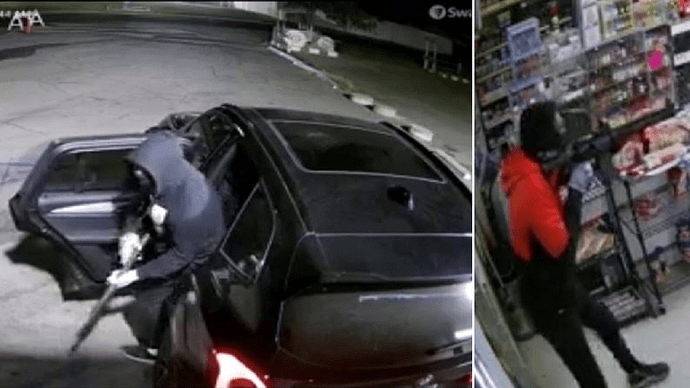 A California liquor store owner in Norco, east of Los Angeles, pulled a shotgun from below the counter when an armed man entered and fired at the suspect.

Heard that the storeowner had a heart attack soon thereafter.

Thank God the old man is fine and the bad guys were apprehended.

That’s exactly how it was supposed to work out. The store owner saw the guy get out of the car with a firearm. Suspecting the guy was up to no good he reaches for his own gun. The guy walks in and points his gun at the store owner, the guy get’s injured. There are two unfortunate things here, first the shop owner suffered a heart attack due to defending against an obvious assault with a firearm, second a misguided young person was seriously injured and arrested for a behavior that he thought would be profitable for him.

Misguided young person my @$$!
A felonious adult engaged in a deadly force attack got almost all he deserved as a direct consequence of his actions.

There are two unfortunate things here, first the shop owner suffered a heart attack due to defending against an obvious assault with a firearm, second a misguided young person was seriously injured and arrested for a behavior that he thought would be profitable for him.

Ummm, what what? Why is that second one unfortunate?

A misguided young person
is now a misguided one-armed man

who will be a burden to taxpayers for years to come.

A misguided young person is now a misguided one-armed man

Watch the video… his arm was not blown off. That is just what he was hollering as he ran back to his buddy’s car with buckshot in his shoulder.

who will be a burden to taxpayers for years to come.

Yeah, it does cost a lot to house miscreants in prison. That’s the price of enforcing laws properly.

his arm was not blown off

That was just the optimist in me.

I work with Gang Bangers and Prisoners on a daily bases, many of them are allowed to train in our gym. Some, not all, of these guys actually come around. They eventually get it. They work with us, guys and gals that haven’t always been stellar citizens and see it is possible to be decent.

Interesting. Admittedly, I have a hard time spending limited resources on things like this, but I do think that there is some good in everyone. Thanks, Mike.

Hey, interesting post. You know how Mom told us “it’s not polite to stare”. Well, I try to honor that, much better at that now than when I was in my 20’s.

But, last month at the “range”; I saw a lady there, and I regret, I kinda stared.

She must have been 85, about 100 pounds, and she was unboxing a brand new, high powered, high caliber, black steel, semi automatic rifle. Kid you not.

Sorry he and his buddies are criminals who intended on stealing this man’s money. They came in with the intent to do harm, and got shot. Personally the only thing I find too bad about this is he didn’t hit them center chest. There was nothing misguided about them.

Had the poor gentleman died these criminals, being sanctioned by legislators, should be charged with murder.

Welcome to the family brother @Tom172 and you are blessed to be here.

@Tom172 welcome! Hope you can find many topics to jump in on!

Was checking to see if I received a reciept for my membership payment, then discovered this.