so just how did he get in?….and why wasn’t he shot immediately?….still some questions here 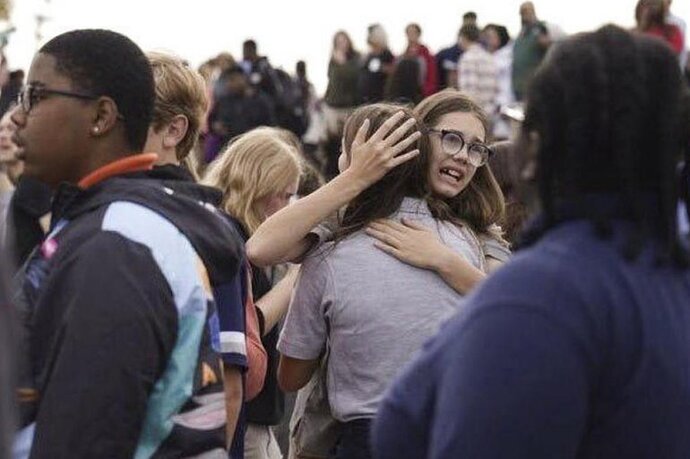 ◀Previous Post Next Post▶ St. Louis is not Uvalde, Texas. That’s the lesson learned this morning by a 20-year-old lunatic who forced entry to the city’s Central Visual and Performing Arts High School while armed with a long gun. Once inside, he shot...

How many of the security guards were armed?

Was the security guard at the point of entry for the gunman armed?

How many of the security guards were armed?

Let me take a guess, uhhhh…is it NONE!!!

Thanks for the post, sir. This is indeed heartbreaking for all involved, to include that community. My thoughts and prayers are with that community and families.

Whoever of the security guards that were armed should have followed along wherever the gunman was trying to force entry and should have engaged as soon as the gunman made entry, OR wait a minute here

does the gun man HAVE TO SHOOT someone FIRST once he’s inside the building before security guards can engage?

OR wait a minute here

does the gun man HAVE TO SHOOT someone FIRST once he’s inside the building before security guards can engage?

We don’t know enough at this point. How many guards were armed, where were they, if they weren’t already there when he showed up, how far away were they, how long did it take them to get there, and what/if anything was their SOP for leaving their post unattended to go somewhere else? Are some of the first questions I would like to ask. Ask of whom, IDK lol

I’m sure there will be a video that will show up from some unknown source.

well at one point it said that the resource officer saw him trying to get in a locked door and saw a weapon,the question is why did he not fire and stop him before he get in to kill 3 people,seems as though the resource officers need better training,and yes I do realize it does get boring and they can get complacent from the same thing every day,and they do need to have the what if scenario and practice it every day,the moment the fact he saw a weapon,he should had put the perp down forth with

That’s not what I read.

" Schools Superintendent Kelvin Adams said seven security guards were in the school at the time,…One of the guards noticed the man was trying to get in at a locked door, but couldn’t. The guard notified school officials and ensured that police were contacted, Sack said."

That it was a security guard, not a resource officer.

Were the security guards armed?

I might have been wrong,but what is the use to have the security guards unarmed?

I suspect that, much like with private citizen self defense, the vast majority of incidents are not lethal force. For example, if there is a fight that needs broken up…I think the rest of that thought finishes itself.

Also, this might be a perfect example of a utility, it sounds to me like a security guard being there and being aware may have sped up the response of an SRO.

All kinds of layered security measures will have unarmed components.

Agreed. I see a lot of unarmed security guards in places I go.

In my line of work I interact with a lot of security guards, both armed and unarmed. Not in schools, but I feel it’s pretty similar. The attitude and training a majority of unarmed guards have is a joke. They barely search a vehicle if they have to, don’t pay attention to the person they interact with, and most of them have zero cares about the importance of their job… they are just there to be there. Even if someone had something they shouldn’t, I don’t feel comfortable that they would find it. I actually asked the question recently “if someone looked/acted suspicious, do y’all search them? Or make them turn around and leave?” Nope, not allowed to randomly search people without permission, and if they have permission, they have to wait for chief to get there. If they want to make someone turn around, they have to get chief to come do it. I’m sorry, but I could never be in that line of work. If you trust someone to guard something, you should trust that when they get a feeling about something, or notice something, they are looking out for the safety of the facility and the people in it. If you can’t do that, maybe you should find better employees… As for the armed security, all of those are military or LEOs. Those I trust.

If you trust someone to guard something,

You dug to the bottom of it right there.

They aren’t trusted to guard anything.

It’s classic theater in many cases. It’s often just for appearances and feelings

As for the armed security, all of those are military or LEOs

Several work for my company. They are not ex military or LEO. Alot of them are washouts from LEO. When the decision was made to have armed guards around, my thinking was and still is if there is a firearm related incident, it will be caused by the guards and not an actual active shooter. Your mileage may vary…

The armed personnel I have experience with are at DOE facilities. They appear to be military at least. I’ve never been to an ordinary plant with armed security, at least that I recall. I know that there are facilities that have armed civilian security, but I realize now that my post seemed to be a generation, instead of the specific instances I meant. My apologies.

I would expect far higher competency from guards at a DOE facility.

I am a combat veteran who uses a wheelchair (power). currently I have volunteered to work at a local school as part of the security team. I’m still waiting on my 2nd callback but, still I can work the front door and the metal detector or even the radios.

I might have been wrong,but what is the use to have the security guards unarmed?

I’m not surprised. Many are just “subsidized placeholders.” They hold a place or position because of a guaranteed paycheck that comes on a regular basis. Sometimes the powers that be gives them the responsibility but no authority. They are more concerned about liability and political correctness, and social media convictions.

I just wonder what kind of “oath.” do they take? Can’t you just hear it …

“I, So and so, Jr. of the Forth Type, do solemnly swear (or affirm) that I will support all suggestions and actions but will defend none, and that I will mind my own business and protect myself and interests at all costs and against any other interests that so attempt to endanger that of my own. I also, solemnly swear (or affirm) that if given the opportunity I will do all that I possibly can to enrich myself and apply the least effort toward anything in the office that I am about to enter into and as will my duty that I gladly undertake for guaranteed pay therein. I do further, solemnly swear (or affirm) that I will not place myself in harm’s way on behalf of another without being assured just compensations, and then only to the extent that no extreme danger is presented. I promise and swear to obey no one, and that I will march to the beat of my own drum without malice aforethought. And if called to testify on any matter that I will faithfully and willingly obfuscate, lie, distort, challenge every assertion to the contrary, this I promise and is my solemn oath, so help me, myself.”

Can’t you just hear it? Just me wondering … it’s comical to me, as I shake my head.