I’ve recently been spurred into looking into a possible 1911 or other similar gun to carry in .45 since seeing the new Taurus 1911 Commander that was affordable (unlike all the others Ive seen). So I wanted to know what made those of you who carry the .45 chose that caliber?
All I have are 9mm atm and am thinking that it wouldn’t be a bad idea to have a larger caliber on hand for a larger wound channel. But I haven’t really known of a way to really research the .45.

I have two Rock Island .45s (the smaller frame for CC). The first one (purchased new) was the basic Commander model and I liked it a lot. 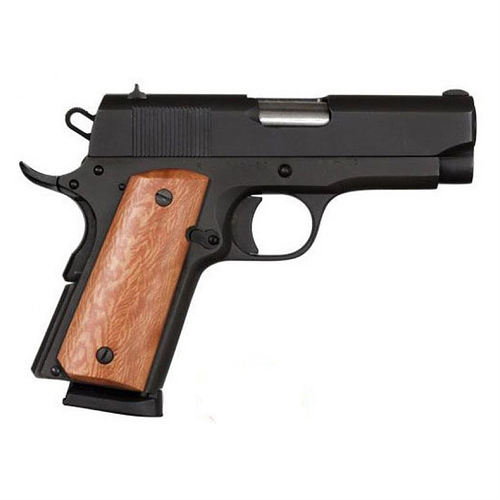 The second one I purchased used and got a great deal on (love it when people see things cheap because they want something else). 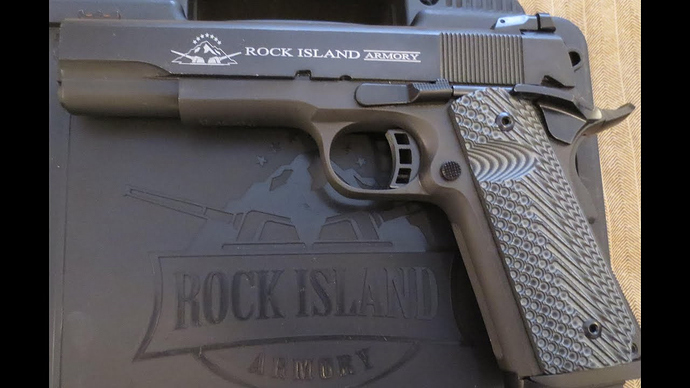 This one has better sites, a nicer trigger and ambidextrous safety. @Dawn saw me shoot it for the first time and it is now my main EDC.

I would suggest (if you can) find a range where you can rent a few different ones to try out and see what you like.

I will not get into how many of each nor what I have for long guns at this time. Lets just say if I find myself in a situation where I have to pick up rounds off the battleground I might have something it use it in.

The gun fit my hand great, and pointed naturally at the gun shop. Then I asked what caliber it was. .45 has a proven history of effectiveness. It’s a low pressure round. Even 230 grain standard pressure ball ammo can be used defensively, if it was all you had. In the event that a hollow point didn’t expand, your still making .45 inch holes. It isn’t known for over-penetration. Now I’m looking into a single stack carry gun, and apples to apples you only loose 1-2 rounds of capacity to a 9mm in the same platform.

My first pistol was a 10mm (1006). After parts became hard to find, I decided to go 45 ACP (H&K USP Expert; it’s a beast size wise). I put many thousands of rounds through that gun at indoor and outdoor ranges and was confident with my abilities with it. I used that as a bedstand gun for over a decade. I now keep a 9mm for bedstand duty, but I just can’t warm up to the round.

When it came time to conceal, I wanted something a little slimmer than a G19/G23, and was leaning towards a single stack. I liked the Kahr trigger, and the CW45 just felt right in my hand. It also had a very comfortable kick for the size and weight, felt very natural for me when shooting, and just small and thin enough to forget it’s there when sitting, standing , or doing daily activites. I will, however, carry the K9 or the CM9 when I need something smaller.

IMO, rent as many as you can and find out what you prefer. I rented a Colt Gold Cup that was so dirty I could feel the slide fight the grit every time it returned to battery. I also was suprised how much I liked the Officer’s model. I just found that I preferred the combo of 10mm in 135gr @ 1350fps out of a 5" 1911 over the 45 ACP options (how the gun handled with that load more so than ballistics). YMMV.

Lucky Gunner has some interesting results for different brands of ammo out of compact firearms. The 45 section is further down the page: Lucky Gunner Ballistic Tests. Also, Paul Harrell does a few videos with different types of 45 ammo and comparisons with other calibers on his YT channel. I’ll mention that the YT’ers ScubaOz and tnoutdoors9 have some interesting gel tests with different types of ammo, including the .45 ACP.

This will sound stupid, especially if you know me, but tradition has alot to do with it for me. It’s been the handgun of choice for my family for generations. So I like feel, the heft, and the performance of a .45.

I have been asked many times over the years before double stacks became available for .45 why don’t you use x y z calibre it holds more rounds? My answer has always been the same, if I can’t hit you with the 8 rounds I have in my . 45 I probably didn’t have any business shooting at you in the first place.

I carried it for a bit and then it sat in a lockbox for some time… Remebered I had it and traded it in on another pistol.

@Brian_J and I discussed this in another topic, after 108 years the .45 is still King for a reason. The 1911 feels good in the hand and looks good to the eye and I feel safe with it beside me whether on the street or the woods.

Yes we did, and like you I trust it with my life EVERYDAY and will continue to do so for as long as I’m able to. 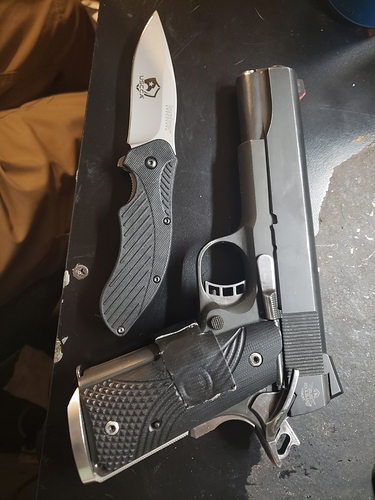 I don’t typically carry it, but I do own a 1911 (I carry it when working RSO shifts or as a “BBQ gun” for special occasions).

Along the same lines as @Zavier_D, for me it was more of a tradition/collector kind of decision.

The history of the 1911 from WWII forward in military engagements…the sleek classic look of them…and shooting them is fun and they’re very accurate. I got it chambered in .45ACP because that’s what John Browning designed (keeping with the historical/traditional aspects of what I like about the gun).

As a “larger individual” it’s not really a EDC option for me as it’s too big for me to carry concealed and I don’t like the feel of the cocked hammer in my side when sitting. But that’s me, I know plenty of folks that it works just fine for as an EDC gun. 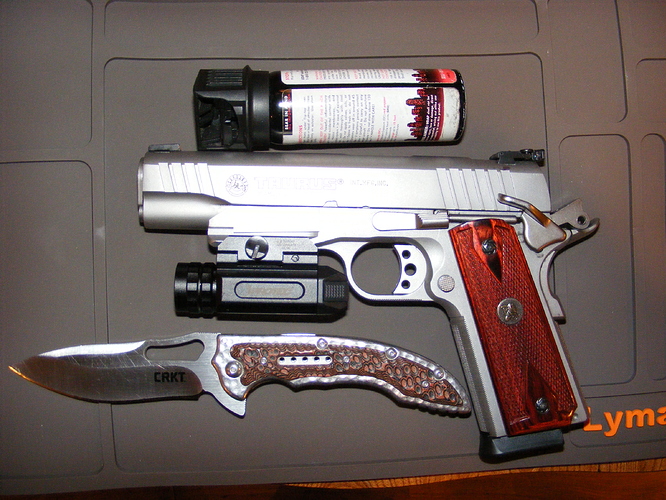 Merry Christmas everyone and to all a good night.

I don’t currently have one (if i did have one, i would have lost it in that terrible boating accident…), but I can tell you why i am (and have) considering one.

If you are in a rounds limited state (VA is likely soon to be), then one of the primary advantages of 9mm (high capacity) goes out the window. So if you’re limited to 10 rounds, you might as well get the most potent 10rounds you can handle. A slim single-stack .45 is very easy to conceal for many people even if it’s a bit heaver. And the magazines are also slim.

If you aren’t in a rounds limited state, may I introduce you to the lovely DA/SA FNX-45 Tactical. 15 rnds of .45 is absolutely lovely to shoot. A buddy of mine has one and I looooooooove shooting it. The weight of the firearm itself and the pound or two that 15 rounds of 230gr in the steel mag just absorbs the recoil. I have the least experience shooting it, but I shoot it as well or better than my own I’ve had for years.

Other reasons include the classic nature of a 1911 (literally over a century old). The difference in recoil impulse compared to other rounds (push vs snap compared to 9mm).

The only downside is pretty much the slightly higher cost per round. And maybe you need a new firearm

Rock Islands are so underrated, these are awesome. Interesting history on their origins people should look it up

I’d love to get another handgun for EDC!

I just figured I’d wait until I’m 21 (I’m 20 and my bday is in August) and get my pig feed bill down a good bit (I live on my parents’ farm) before I get another pistol.

@KenM I actually looked at some RIA 1911s and found a subcompact barrel with a compact grip size that was just under 800 bucks. I really like the look and the size. I just need to find a 1911 to rent that has a comparable size someday. Plus 1911s normally go for higher prices too if I’m not mistaken. I’ve shot my CCW instructor’s custom 2k 1911 gun

. It had a hair trigger!

The only hair trigger pistol I ever shot.

Also I’m not limited in capacity by law thank God since I live in AL.

I’ve found I love my Security 9 compact grip because it fits comfortably in my hand (with a little extra room) and it doesn’t feel too big in my hands. My XDS on the other hand fits perfectly with it’s flush fitting magazine

But my point is that all I have are 9mm and I’m considering a change in caliber but am wanting to make sure there’s a good reason since I’ve hear ballistics are just about the same across the board 🤷 it’s really sounding to me like it’s preference more than damage. But knowing a 1911 is extremely accurate makes me more comfortable in getting one

Mine is the full frame G21, hers used to be mine G21sf barely a difference in my hands. I like the Sig P220 and HK USPs as well.

I always wanted a 1911, been looking at them as well. I like the Rock Islands and the Kimbers.

As with anything I’d recommend shooting different rental models at the range, as opinions and preferences vary.

When you say “here” you mean where you live?
I know a place about an hour away from where I live that my friend and I went to a few months ago. He saw an XDS there that was like 1-200 dollars cheaper than at the local sporting store. So I want to look there when I have money.

Yes here in CA from my local FFLs/dealers, I do the same.

This week I went to an FFL an hour away to buy another Aero Precision M4E1 lowers in FDE. Everyone is out of stock and it was cheaper for me to drive out there than order and do a transfer.