Suspect shooting at cars on freeway 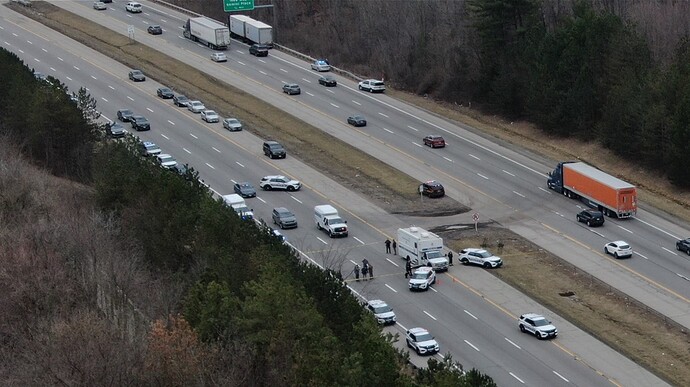 21-year-old charged after exchanging gunfire with police on I-71 north of...

This happened in Ohio a few miles from my house this morning. Would someone legally having a firearm in their possession who drove by the shooter be legally justified in eliminating the threat?

Some things to note:

I’m going to avoid the legal question because I’m not an attorney, but my first thought is how fast you’d have to react. Travelling down the interstate at a normal speed (40 - 80 MPH depending on traffic flows), you would have to:

This would be quite a feat. I’ve had the opportunity to shoot from slow-moving vehicles at safe targets, and it’s not as easy as it looks in the movies. I genuinely don’t know if I’d even get past #2 before I blew past, though.

Not to mention that once you fired a round on the highway, whether successful or not, you are now the subject of a related police investigation. And if it’s a federal highway, does that subject you federal jurisdiction? No idea, just curious.

As you are alluding to, I don’t think shooting while driving by would be an ideal solution.

I think in this situation I would have to somehow decide with certainty that the observed shooter was actively attempting to harm me or other innocent commuters and not defending themselves from someone who was attacking them or were an undercover LEO firing at a criminal. Then I would have to decide if my chances of stopping them were worth the risk of me not returning home to my family. Those are all tough calls.

If I did decide to act and they were in the open and I hadn’t passed them yet I would consider using my vehicle to remove the threat. If I was past them or they were behind cover I would likely pull off the highway and engage from behind the cover of my vehicle.

f I did decide to act and they were in the open and I hadn’t passed them yet I would consider using my vehicle to remove the threat.

I thought this as I was reading your response. I agree that your odds of stopping an active shooter in this scenario are probably higher with your vehicle than with a firearm, assuming conditions allow it (i.e. you’re in the closest lane and the shooter is standing in the open). I’m still not confident I could properly identify the threat in time to make that decision, but there are plenty of people who think faster than I do.

Once past the threat, I’m not sure I would stop. If I could safely stop my vehicle within a reasonable shooting range of the target, then I’m also within his shooting range. Perhaps I’ll get lucky and he won’t notice I’ve stopped, but otherwise he has the advantage on me because he’s already shooting. I still have to retrieve my firearm and either take a shot from my vehicle (depending on the angle I parked) or climb out of my vehicle and take aim. I could have a few new holes in my head before I finish that process. Again, some people move faster than I do, but the best I can do at that point is probably call 911.

Agree that it is unlikely that I would be able to assess, decide and react quick enough to not end up well past the threat. Unless I was stuck in slower moving traffic. That could create a whole other scenario that might remove the safe choice of getting out of there and force me to have to react.

Either way my vehicle is a potential club or good cover if I can get behind the rims and/or engine. One reason I prefer to carry on body while driving is in case I need to make a quick exit for whatever reason.

I suspect you could claim self defense but I’m thinking a prosecutor would ask “After you passed him, why didn’t you just keep going…?”. Might be a tough question to answer. Then again, it’s not up to the Prosecutor, it’s up to the Jury to decide.

it’s not up to the Prosecutor, it’s up to the Jury to decide.

I don’t have a lot of faith in the jurors I’d get, based on the prosecutors they keep electing.

I supposed “Why didn’t you…?” is a fair question, though. That’s why I keep the USCCA card in my wallet, so I can get an attorney to help me out before I mis-articulate the circumstances.

I suspect you could claim self defense but I’m thinking a prosecutor would ask “After you passed him,

Not a lawyer so take this for what it’s worth but most of the laws I have read allow for the defense of others who are in imminent danger. But that interpretation will be up to the LEOs, prosecution and potentially a jury. No good deed goes unpunished.

Good Point, I hadn’t looked at that angle…

I guess my immediate question is the use of the word “eliminate”.
I’m sure you meant to say “stop” the threat.
If in your state, that’s considered a felony that can cause death or serious bodily injury to another…
Check your local state laws regarding the use of deadly force.

1: I think that constitutes an active shooter, indiscriminately shooting at people or vehicles…

2: People or vehicles, shooting into a private conveyance, such as a home or vehicle is considered a felony and will probably cause death or serious bodily harm.

Like @Ouade5 stated, you’ll need to be pretty quick to notice such actions at your speed and distance.
In this instance, be a good witness by pulling over and dialing 911

I’m no lawyer, and I don’t play one on tv. Good question though! FYI as far as I know in my state throwing anything at a moving vehicle is a felony.

Don’t make an assumption that officers, there is a bunch of them in the video, are situationally aware, and won’t be startled by the 2nd shooter, then fire on the 2nd shooter’s car indiscriminately.

Under the circumstances, why would you consider anything other than slamming on the gas pedal, and rapidly increase distance between you and the threat. What is the threat? It is bullets, regardless if fired by the bad guy, or the good guys.

Of course, I play devil’s advocate, but because I really don’t wanna see anyone else get hurt.

Still, you be you, and do your thing.

Maybe just as food for thought….

Nobody is forcing you to shoot.

Why do it? What’s the motivation? Instead, joining the police force or military is an honorable profession. But they too work under codes of ethics, rules, and doing the right thing.

Right up there with grammar and high school schoolteachers.

Are you at risk? Can you maintain cover or move away unscathed?

In this scenario, the person(s) the real assailant is shooting at is not your family member, correct?

Can’t help but see, there is that lack of intimacy in this scenario, suspect is shooting at fast moving cars, even if one prevents a driver from getting shot and crashing, one may never know if they saved or prevented, or their identity, ever.

You’re saying that the persons he/she is shooting at never went through the work to become a legal conceal carrier?

What would your spouse, child, or parent, or attorney want you to do?

Are you legally required to shoot?

So, you’re saying the shooter is actually not pointing the gun at you.

What if the police or another person “carrying” mistakes you for the criminal assailant? You’re not in police uniform, nor have a police cruiser.

Is that more of a role for police officer to take on?

Could you instead call 911 to ask the police to get there?

Aren’t the police trained to handle those situations with best practices whereas a regular Joe Public is not?

And these might not be close distances, but a fairly significant distance, under noisy fast-moving traffic, and in a stressful unplanned situation to get an accurate shot off in, less one injures an innocent.

Will your actions reflect against the greater firearm community’s common sense? Is it responsible? Is it smart? Does one care about the long-term downstream effects on the rest of us?

Live free and die hard. I respect anyone’s wanting to help in this situation, but ask we think about the consequences onto both self and others.

I asked this question because I knew it would help me hear a lot of different perspectives, lots of things to consider that I wouldn’t have thought of. So thank you all for your input.

These interactions will help me to make a more informed decision if something like this ever does happen.

I liked this post especially because it could resonate across various other scenarios which can and do occur.

Knowing if and when one should react, and how to, is a question I too try to mentally prepare for.

And then our younger loved ones who may carry also ask, and our hearts go out to them, and their questions; Us being responsible guardians of our rights.

This forum is a valuable resource and modest in that outside of it, where we obtain this education on “how to”, is not mandatory, so we learn from each other.

Is the shooter which you see a bad guy or a good guy?