How often do you rotate your carry ammo?

I snagged this when it was shared by ASP. I like this idea.

Just The Tip: Ammunition, Chambering, Checking, and Problems Richard Kilgore While it’s unlikely that we get to choose the time

It probably ends up being more around 6mo or so not so much because I’m thinking about rotating it out, but more because I like to fire the carry ammo every so often just to make sure I have a feel for it’s recoil etc (it has more punch than my range ammo).

But definitely something we should all be considering, thinking about.

Used to do something similar when I was over seas and in the rear with the gear. Even on a FOB you had to down load before going into the DFAC to eat. Saw lot’s of “set back” ammo. In general I will just watch the front end of the first two rounds in the mag. When the “petals” of the HP start to get hammered shut it’s time to swap for fresh. I keep one “box” for beat up rounds. When it gets full I shoot it.

This leads me to another question about unloading and reloading.

I have seen a number of people that carry their pistol to the shooting range remove their carry ammo and go shoot target ammo at the range. When they reload their carry ammo they put the top round in the chamber and release the slide rather than loading the chamber from the magazine. This always bothers me because even though the tip of the extractor is rounded or chamfered to allow it to jump over the extractor groove, over time it just seems like it could literally snap the end of the extractor off. If it did, then they would get one shot at best.

Am I over thinking this?

I rotate defensive ammo (carry & home defense) probably about once a year. I’m not really strict about it though, just “hey this has been in here a good while I should probably shoot it”.

I hadn’t known about setback until seeing the Sage Dynamics video, and now I do toss once-chambered rounds into a can to shoot once I have a magazine’s worth or so. Both Aaron Cowan and Claude Werner think 4-5 chamberings of pistol rounds is “enough”. The only reason I toss even though it’s only been chambered once is just because I don’t unload my defensive pistols that often and it’s just easier to set aside the one round rather than try and keep track by marking it.

@Gary_H You are not over thinking it you are thinking correctly. The odds that the brass is going to break the steel is slim but a whole lot of our pistols small component parts are of EDM construction or cast and do not do well with stresses they are not designed for. Chambering from the mag is the correct method as all works as designed. Checking OAL (Over All Length) of a cartridge is a simple eyeball test to prevent over pressure situations or less than optimal performance of a defensive round.

Where I see most failures of the extractor is not in pistols but rifles. Jam the captive mag full slide one down the pipe and thumb the first round down so the bolt slides over and slap it forward. I get 3 -5 every hunting season by referral through my FIL from guns that have been chambered a lot and fired not so often.

I buy new and change the batteries in my smoke / carbon monoxide detectors, door bell, clock, SHTF flashlights, AND service ammo/mags in all my loaded & ready to go guns twice a year. Spring forward & Fall Back. Easy to remember and easy to plan for.

I used to rotate ammo
every 2 months.

I just purchased 300 rounds of my carry ammo and will reload magazines after shooting my current carry ammo at a Class tomorrow night. The ammo I am carrying today is about 2 years old.

I shoot out my non range ammo on everything every 3-4 months. Just so I keep that feel for the differences in between range ammo and home defense ammo.

Excellent question. This might be an extreme example so take it with a grain of salt. When I was in the AF we would sometimes be given carry ammo 5.56 and 9mm to use in live fire training. We would always experience miss fires, squib loads and even some total failures in the M16 due to bullets being left in the chamber when a miss fire was followed by an immediate action and follow up shot (2 bullets tryi6to go down the barrel). Our recertified training ammo had a pretty hard life when being carried by the Security Forces so, like I said, this is an extreme example.

Kind of rotating today. Winter carry, to summer carry. It’s a good reminder of testing guns and ammo. Summer ammo is lighter, and faster, and hits lower point of aim than winter carry. 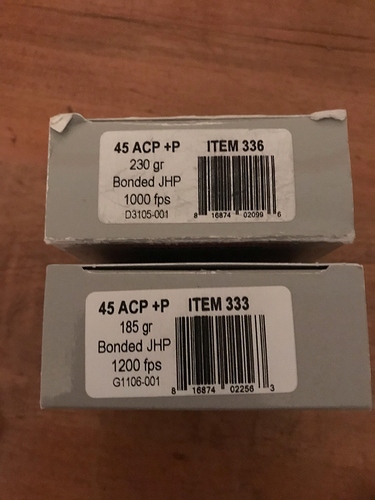