wasn’t sure where this could go.
did a search and did not see anything describing it like Tom does

My question is: If you do the no penalty SBR registration, do you own an SBR or do you own a brace that must accompany the Serial Numbered Lower submitted?

Asking for a friend.

When administrative agencies make stuff up that is unrelated to the record before them. courts that strike down such rules will often use the phrase ""arbitrary and capricious… If the courts have any integrity (and it’s not clear they do), this is a rule change that sure seems arbitrary and capricious to me.

ATF calls it a Buffer Tube.
I call it a Spring Container. Not illegal.

atf calls them guns
I call them cordless hole punchers

I say again, who didn’t see this coming?

Thanks Leo23 for this post. This is very, very crucial and important news.

So, I can add a grip to my buffer tube and it will still be a pistol?

Now we just need to find some bill, that doesn’t infringe upon Constitutional rights. Something that Senate Democrats wants. Then piggyback that ATF bill onto it.

I’ve been diligently communicating with my elected Representative’s.

Thank you for contacting me regarding H.R. 9033, the Stop Harassing Owners of Rifles Today (SHORT) Act , introduced by Representative Andrew Clyde (R-GA). I appreciate your input on this issue.

This bill would remove short-barreled rifles, short-barreled shotguns, and other weapons from the definition of firearms for the purpose of regulation under the National Firearms Act. Among other provisions, this bill would prevent taxation and further regulation of short barreled rifles(SBRs), short barred shotguns(SBSs), and other weapons(AOWs). This bill would also combat Biden’s Pistol Brace Ban introduced earlier this year which would have reclassified pistols with braces as short-barreled rifles, which are a controlled class of weapons under the National Firearms Act. This reclassification would have imposed new regulations on these gunowners that, without compliance, could have resulted in felony charges.

As you know, the Second Amendment to the U.S. Constitution states that “the right of the people to keep and bear arms shall not be infringed.” Restrictions placed on legal gun ownership are not only unconstitutional; they inevitably harm law-abiding citizens and do little to dissuade the illegal use of firearms. As a gun owner myself, I will oppose any effort to undermine or eliminate our Second Amendment right. I will continue to monitor the debate surrounding H.R. 9033, and I will keep your thoughts in mind should it reach the House floor for a vote.

Thank you again for taking the time to share your views. Please don’t hesitate to contact me in the future if I can be of any assistance.

I see the problem. You’re represented by an ex-member of Congress. 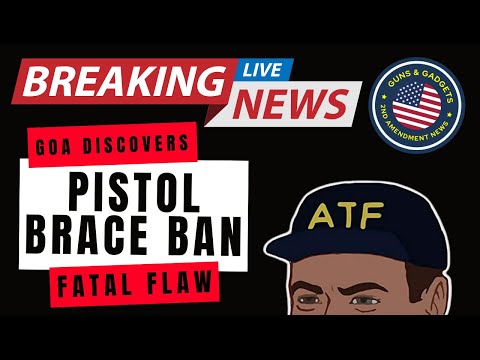 Well worth a watch if you were set on getting a “free” stamp.
In a nutshell, when you form 1, form 4 whatever, you get approved before getting/modifying product. Those who have gone through this know how long it took.
With this pistol brace fiasco, you already own the gun. Now you’re asking for approval…88 days after submissions, your background check gets automatically denied…so now you’ve given out your name, address, fingerprints etc.
As of October, ATF e file waits were 180 days, traditional over a year… before this potential 30,000,000 form influx…I believe that’s about 10 years processing time per current approval rates.