New invasion from the North?

Population Explosion of Canadian “Super Pigs” Could Spread Into the Northern U.S. (msn.com)

There was an escape from a game farm of about 50 pigs in Baraga Co. in Da U.P. about 15 years ago. The DNR was begging anyone with a small game license to come and hunt them down. 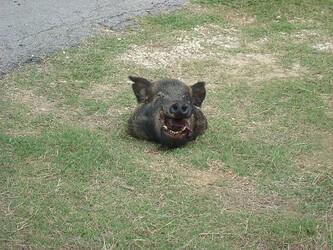 That’s what was left after the BBQ.

Do you use any other parts of the pigs head like the cheeks, tongue?

That is actually put there as a deterrent. Legend has it, the destructive drove will avoid the area if you leave the head there. I was invited to hunt with these guys down in Texas, I got the shot, they took care of everything else.

DNR was begging anyone with a small game license

If they really wanted them gone, they could have said they are an invasive species and aren’t covered by game laws. No license needed!

In Arizona we get an invasion of Canadian Snowbirds every winter. Protected species.