Language of George III (and why it matters)

A well regulated Militia, being necessary to the security of a free State, the right of the people to keep and bear Arms, shall not be infringed.

What do these words actually mean? If someone is to be a “Constitutionalist”, then there has to be both a historical and a definitional comprehension of the language of the times. For instance, The Anglican Book of Common Prayer used during the late 18th century, employs the word “travail” - pronounced “truh-veye” does not mean “travel” or even “heavy marching”, but rather, “worries” or “troubles”.

Even so, “well regulated”, in late 18th Century parlance does not mean “regulated” in the modern sense at all, but rather, “properly and heavily armed”. “Militia”, as specifically used to denote a citizen army, which was ALL THE ARMY THE FOUNDERS WANTED in the colonies, now the new states of the new country. The very thought of an unregulated militia was treason; Still, the very idea of an overwhelming Army was also so odious, it took special acts of Congress to eventually create one, and it wasn’t allowed to operate in any state.

And, as Penn and Teller have so graphically pointed out, it was the FEAR of a Standing Army, which the colonies had just defeated, that was ever on the minds of those Constitution framers.

So, what the 2 Amendment really points to is the right of an individual to protect him or her from the STANDING ARMY becoming politicized, and it should not and could not be withheld, by Divine right, from ANY citizen.

Technically, I need my own EMP projector.

You can’t reference Penn and Teller without linking the video. 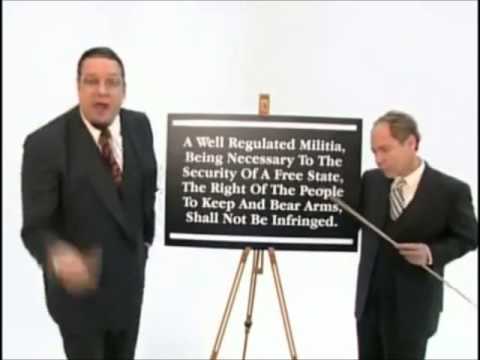 It is my understanding regarding the 2nd Amendment, the Founders understood that a state controlled military force is a two-edged sword. On the one hand they recognized the necessity of the State being able to call upon a military force for defense of the State and its people. Prior experience had taught them that a standing army was corruptible and could be used against the people by ruthless officials. Their solution was to reject the idea of a professional army in favor of a citizen militia which could be called up at need, even though they still had misgivings over the possibility of even a militia being used against the people.

So, how do you fight a two-edged sword? Why, with another two-edged sword, of course! Hence the 2nd Amendment. By prohibiting the government from interfering with the people’s right to “keep and bear arms”, and tying that right to the well-accepted pre-existing, God-given right of self defense, they insured that “the people” could BE the militia while also retaining the means to defend themselves AGAINST the militia.

The simple answers are often the best.

Y’all do realize the government has already gone way off the beat and path. There is and has been for a long time enough infringement on our rights to actually justify replacing the gov

Agreed! We have politicians swearing to uphold the Constitution and before the ink is dry are publicly spewing anti- Republic pro- socialist agenda without even being called on it. This should be a treasonous act. Instead it has become the norm and is accepted. Progressives believe that they can make any laws they choose and law abiding conservatives will do as they are told. I am not convinced they are wrong or the " Squad" and Sanders and the like would be in jail not in public office.

Our Forefathers stopped rolling over! NOW THEY JUST WEAP!

It was the unorganized militia that started the ball on April 19, 1775. In the end it is every Man and Woman who will have to decide what is Constitutional. 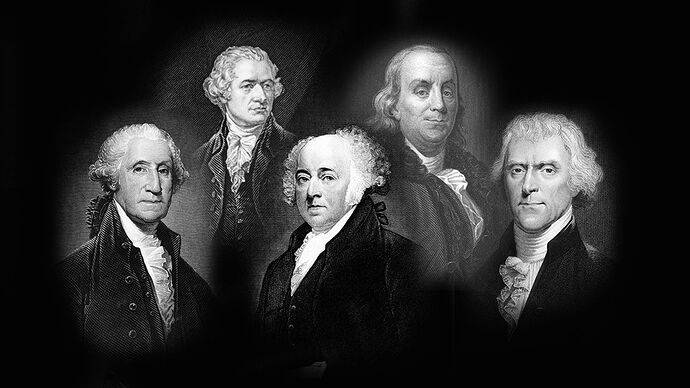 We said what we said.

And those 9 can go rogue as we’ve seen historically. If they modify to eliminate our Constitutional rights then it is up to us (whether in a group or individually) to decide if we will make the correction. We do it by voting. As far as using arms there should be a big question mark next to that course of action. However, I do believe that if communism or some other tyrannical system of government hijacks our democracy we can be sheep or wolves. I choose to be a wolf and die for trying to restore freedom.

“This country belongs to the people and whenever they shall grow weary of their government they can exercise their constitutional right to amend it, or revolutionary right to dismember it or overthrow it.”

You seem all to willing to follow whatever law the powers at the moment want to make. Baaaaaaaaaa.

Patriots are revolutionaries who win. Traitors are revolutionaries who lose. The only difference between the two are the ideals held by the revolutionaries. My ideals say try politics first. If that fails, the Georgian Language of the Constitution is both explicit and implicit. Frankly, all three sides of my family - Huguenots, Scots, Presbyterian Irish, 7th & 4th Marylanders at Cowpens, 2nd American Revolution, survivor of Reconstruction - have done nothing but BE revolutionaries. If I’m going to spill blood, it better be the absolutely only answer left! I will walk slowly to the fight, but I will never by a lamb to the slaughter, either.

There are 9 people who get to decide what is constitutional and you’re not one of them.

Actually, they don’t, but they decided that they do, and we have let them.