To preface this, I am not a person who shares links and stories online.
I figure most of you can do that on your own and I’m not a news aggregate.

But, in this case I feel it’s important to share the video that is in the Foxnews link below.

As part of my Defensive Shooting Fundamentals course I make the student absolutely aware that the gas station is the modern day watering hole. This is where the gazelle comes for water and the lion waits to pounce.

The woman in the video appears to be living in Condition White. Totally unaware of her surroundings. If after she started pumping, backed up from here car about 6-8 feet and watched her surroundings in Condition Yellow she 100% could have avoided this. “Stop! Don’t Come Any Closer!” She could have retreated, taken cover, or found another way to stop the threat.

This should never happen to you if you live in Condition Yellow at every gas station.

The California woman who was severely beaten while pumping gas in an unprovoked, random attack last week said she continues to live in fear even after the suspect’s arrest, according to a local report.

Gas stations are a good location for an attack because if you are gassing up your vehicle you are not paying attention. I have been gassing up my vehicle and what I do is look around and check my surroundings. I put the nozzle pin on lock so I don’t have to watch or keep my hand on it. I wish that woman would have been armed because that was a vicious attack. That man was three times her size and could’ve killed her. Even though this man wasn’t armed she would have had the right to defend herself with a firearm if she had it. The fear of being beaten to death or knocked unconscious and have your weapon taken from you becomes very real in this situation.
Shame on those people there that didn’t even help. Another case of mental illness unfolded.
I mean that man was so out of shape those guys could’ve pounced on him and held him until law enforcement arrived. They just let him climb into his car and leave. What’s the world coming to. VERY SAD.

I don’t need to tell you this, but it seems like Nobody wants to help a person in trouble anymore. Your right @Johnnyq60 it’s VERY SAD.

But you know why… Don’t you?
Every witness who wants to help, needs to have a good attorney or a lot of money…or be crazy enough (like me) to don’t think about it and just help.

Sounds like me @Jerzy I’m still crazy enough to jump in and help. Runs in the family I guess.

I was born and risen in Poland.
If this would have happen in Poland or I would be there in Cali… this big guy will have my heavy boot in his crotch

Thanks for sharing. One tough lady. Neat how her daughter is thinking about joining the police force and finding an honorable career. Educational vid. I learned a lot from it.

Unprovoked assaults are commonplace in this society, now finding itself trying to function in a climate of violence. For some reason, these assaults have targeted ASIANS.

It’s unfortunate that she was never exposed to any situational awareness training whatsoever. I am one of the lucky ones who had a father who was wise to the ways of the world & instilled these skills in me at a young age. 24 years of military service & three years in law enforcement furthered my training and self defense skills. I still read constantly and train to stay sharp. i have passed down this way of living to my sons and daughters. There are people who just do not know because they have never been shown how to do any of these things. My heart goes out to this lady but it should be a wake up call to start living as an informed individual and put in the work and effort to learn how to not be a victim waiting for a place to happen. I can’t hold her accountable for ignorance but moving forward, she must take responsiblilty for her own safety and the safety of her loved ones

It’s unfortunate that she was never exposed to any situational awareness training whatsoever.

My daughter is naturally clueless. I try, along with my sons, go teach her. It’s like she’s ADHD. She still has time. I’m forcing her through drivers education. She doesn’t want to drive. She’d be the first to die in a horror flick, just like her mother.

It is a shame she had to endure this to hopefully get her attention about situational awareness. I am appalled at the number of possible rescuers that went by or watched and did nothing. The fact that the gentlemen that came out and even walked him back to his vehicle and did nothing are heartbreaking.

Agreed, there is so so so much that could have been done to stop the attack in a non-lethal way.

I just watched a video of an attempted robbery at a gas pump. The guy pulled the nozzle out of his tank, soaked his attackers, and got a lighter from his pants pocket. His attackers fled in haste.

As part of my Defensive Shooting Fundamentals class, after we eat lunch and talk restaurant and public place self-defense, we take a field trip over to our local gas station and get gas.

We talk and move around the vehicle. We present gas station robbery scenarios and how to avoid them. We talk about what to do if you are threatened and potentially fear for your life or great bodily harm.

Once again, here is a link to a gas station robbery. This is the most probable public place you will be robbed at, a gas station.

(Note: the title uses the word “burglars” they are actually “robbers”, by definition.) 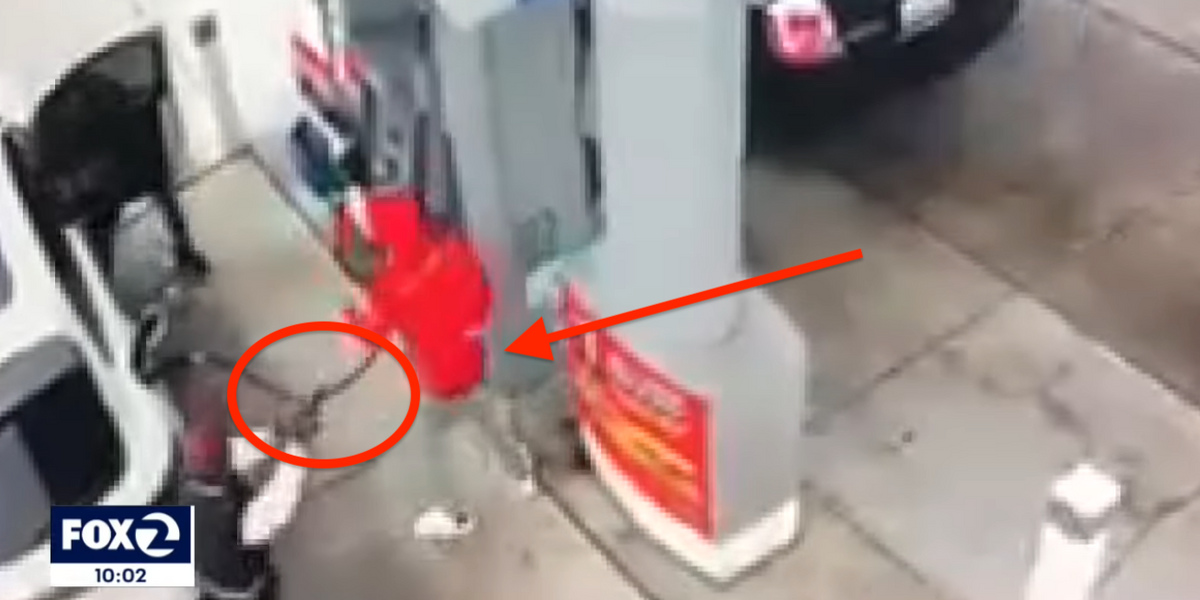 A well-known retired Oakland police captain was the subject of an attempted robbery in the Bay Area this week, but the former law enforcement officer was able to fend off the criminals using his firearm.What happened?On Thursday, according to...

Once you watch the video, comment on your thoughts. I have a few (at least 4) major take-aways I’ll share…

Some people do not have in them to help others out. That’s why people like us are out there.

I agree. Most people are not wired to handle threats well and far fewer are trained to respond properly. Everyone has their different skills and abilities. But their is no excuse for people to not at least be dialing 911 and shouting for help.

As you watch the second video link from an event just the other day, the retired chief of police makes the following errors.

All this could have been avoided if he had just “Escaped” at step one and/or not been in the fatal funnel of the car and gas pump in the very beginning.

So, here is another link to a video that I use as an example in my classes.
The store clerk appears to use 2 handed unsighted fire. It happened SO fast, there is NO time to use sighted fire. He did what the body does naturally. The bad guys with guns had no training. 1 handed sideways shooting won’t work.

The next time you’re at the range (a range that allows it) try shooting gangsta and see what your accuracy is like.

Read some of the comments from readers. There are lots of armchair quarter backs , who have never had training, one that stands out, he should have had laser sights, there is NO WAY he had time to LOOK for a laser dot on the moving assailant.

I later read a report that his gun fire did not hit any of the assailants. The bad guys took friendly fire from each other. Look at the last few seconds of the video where they are all flagging each other with their firearms. While, at the same time trying to shoot at the store operator, they hit each other.

Things I would change:

Los Angeles armed suspects scramble for cover after employee whips out his...

Two suspects are wanted in connection with an armed robbery in a Los Angeles-area smoke shop that resulted in a shootout between a security guard and four others in which one person was killed, authorities said.