Women love to build one another up, and we enjoy growing, learning and experiencing together.

This is a companion discussion topic for the original entry at https://www.usconcealedcarry.com/blog/ethos-logos-pathos-differences-firearms-training-men-women/
1 Like
Ouade5 March 11, 2021, 10:37pm 2

Women love to build one another up

You lost me at the first sentence. I’ve been to enough mommy support groups, HR meetings, and family reunions to know that this statement is 100% false.

I’m with @Ouade5 , but I’m apparently slower on the uptake. I got all the way to this quote and find it to be generally true…and universally absurd.

To me, there is no more fundamental difference in humans than the difference between men and women.

The quoted statement above captures it all so very well. It both describes and illustrates our differences. Not only do we men simply not get it, but the fact that we read that statement, blink, scratch our heads, and still don’t get it (while apparently women do) underscores the chasm that is our differences.

Maybe it’s best to think of it all as a Zen Koan, an enigma that cannot be solved, merely experienced.

The quoted statement above captures it all so very well. It both describes and illustrates our differences. Not only do we men simply not get it, but the fact that we read that statement, blink, scratch our heads, and still don’t get it (while apparently women do ) underscores the chasm that is our differences.

Maybe it’s best to think of it all as a Zen Koan, an enigma that cannot be solved, merely experienced.

I’m curious do women have an interest in "pretty guns? 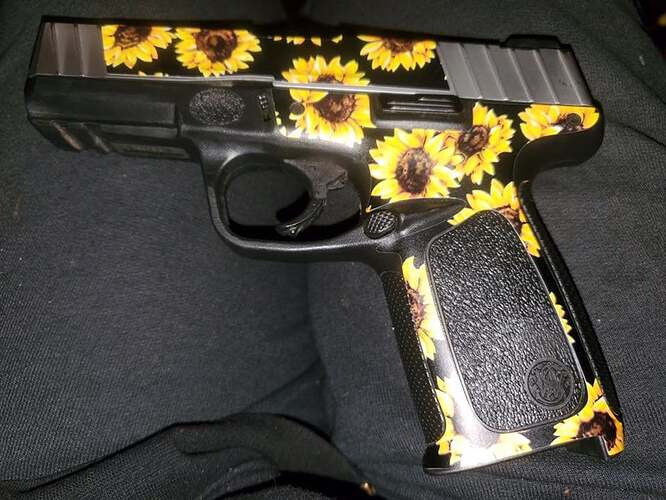 Depends on the person. I don’t modify my firearms or go for any that have extra bling/attention drawing decoration.

Thank you for that moderator - great feedback!

the flipside is on a USCCA thread where a participant made fun of my robin egg blue 9 mm.

As a certified NRA instructor most of the classes for basic pistol and CCW are mixed men and women classes. The biggest differences I see is that more men that have the attitude they know all about guns. I find women are more fearful of the handling of the gun. The old adage of know your audience is extremely important when instructing. The introduction part of the class is where you can get a feel for the persons attitude about guns. I spent much time on mind set and attitude in the classes. The instructor that caused the woman to get upset needs to go back to training.
I find it interesting that the author stated that women are different than men when society is promoting equity and the post modernism doctrine specifically states there is no difference what so ever.
Vive la différence!

the author stated that women are different than men when society is promoting equity and the post modernism doctrine specifically states there is no difference what so ever.

I would say that women are different than men. But that doesn’t mean that the reason women learn differently than men is because of their gender. We all learn in our own way. Some people are researchers, some people rely on word of mouth, some are impulsive when making a decision. In training/education, some people prefer reading, some prefer listening, and some are hands on. IMO, that can be said for either sex. I’ve had overconfident men and women in classes (yes, more men than women come off over confident). I’ve had very timid me and women in classes (yup, more women than men come off timid). And I do know that a bunch of these people are playing to the stereo-type because it’s what they think is expected of them.

You lost me at the first sentence. I’ve been to enough mommy support groups, HR meetings, and family reunions to know that this statement is 100% false.

Unfortunately, I would agree with you for about 50% of women on some topics. The gun community really does seem to be different for women - we do build each other up and have left the cattiness out of firearms training (from what I have seen, maybe I’m just really lucky??)

Train to the individual no matter their gender, age, race, political, or religious background and you’ll have the best results possible with the individual… well, that’s my opinion anyway. And we all know what people say about opinions.

I have been an educator for over 50 years, teaching elementary, middle school, high school, college, graduate school, managing a business school department, and directing 14 international technology training centers. My observation is that firearms instruction is a unique animal. While there are a few firearms trainers who understand the educational process and differences between learners, in general classes are conducted by instructors with great subject knowledge but who are poorly prepared to deliver training effectively to anyone other than those who think and process information in the way that they do. Having a strong interest and unquenchable knowledge about firearms doesn’t translate to being an effective instructor. It isn’t a man/woman difference, it’s an effective/ineffective instructor difference, with the distinction resting with the ability to relate to individuals.

For every frustrated woman in a firearms class with a swearing, macho instructor there’s also a man in that class who isn’t getting the value they should out of the experience. As a man, I’d rather be in a class with an instructor who understood the starting skill level of the students, the objectives of the class, and had a plan for getting people with various learning styles to their goal, regardless of their gender, than to have some blowhard spend all of the class time bloviating about their impressive experiences and gun collection, spouting acronyms without explaining them, and demeaning students because they haven’t already accomplished the things they are taking the class to learn.

I don’t think it’s a man/woman issue nearly as much as it is that firearms instruction is dominated by men who perceive the world of firearms to be occupied almost completely by people who think and are motivated like themselves. It is frustrating enough for a man who wants to learn and become proficient with firearms without having to wear cargo pants and a T-shirt with a stupid saying plastered all over it. It is infinitely worse for women wanting to learn in classes conducted by Mr. Knows-It-All when he can’t relate to those people who need his help the most.

For the record, the best firearms classes I have ever taken were conducted by the author of this article. It wasn’t because I was a man or women and it wasn’t because she was a women or a man. It was because she knew as much about how to teach as what to teach.

I don’t know. Why do men have an interest in black, wicked looking guns? I expect it’s a matter of taste. My wife hates pretty guns, and if I ever gave her a pink gun as a present I better be ready to duck because she’s going to throw it at me. She loves nasty looking guns in basic black. For the most part, I think it is a matter of personal taste, but there may be another aspect to it. Maybe some women just like something they find esthetically pleasing. No offense, but it’s really not that unusual to like to make your gun something you can identify with.

I am a retired Law Enforcement officer who was a field training officer for many years. Women were absolutely different to train than were men.

I start by telling them that there is plenty of time to learn to shoot well, but precious little time to learn to shoot safely. That is where we begin, and my methods are identical for the men.
I leave the guns locked up and begin with an unplugged circular saw, and discuss all the safety features and procedures of the saw which are remarkably similar to a handgun. Once the mysterious hand gun is recognized as a powerful tool, then that undisclosed fear within the shooter begins to fade.

Individual instruction is so much better than a group. My students know that while on the line if they feel my hand squeeze their shoulder they are to “freeze” keeping the firearm pointed down range.
It could be their thumb is in the wrong spot, an unrecognized malfunction, etc.
The matter is resolved safely and we continue. There is no ringing a gong.

As for shooting well, I have found that two women who are “safe” make great training partners for the reasons stated in the article. They rather quickly require less and less “hands on” instruction.

Thanks for the article. I have a female friend getting into firearms and passed it along to her.

I only buy “pretty guns”. in long guns I want walnut stocks and scroll work is nice too. My hand guns are not as pretty. I have a small semi automatic 22 with wood grip and two stainless revolvers. I looked at a pretty blue semi automatic but the slide was too stiff.

The main issue I have in buying guns is that a lot of gun shops ignore a petite white haired grandma. I am left handed with short arms and fingers and a limited gun vocabulary. I usually leave feeling humiliated and odd…not empowered and confident.