I have installed a bunch of them (though all what I consider better quality than the romeo) and I have watched all the videos such as Cowan of sage dynamics dropping them from shoulder height onto concrete repeatedly. I have seen them at the range, in classes, and at matches. I have had more irons fail than I have had optics rail (been using dots on rifles for a long time…)

A quality RDS that is installed correctly is exceedingly reliable.

It may not be your cup of tea, but if your complaint is reliability or durability, I think you have a piece of the equation missing in your application, because that’s not a limitation (and irons can back them up anyway)

But, about the romeo you used, did it work?

Noted, Nathan is in the NO on iron sights column.

I am in the pro red dot sight column.

I did specifically state that irons are still used with an RDS. EVERY sighting system, no matter how robust, benefits from having a backup

Nathan, no offense intended. Use what works for you to defend your life.

Both of them are currently working. I like them and they have their place. Still mounted and functional. I’ve hit steel at 150 yards with the Shield after I figured out the hold over. But I can hit steel at 100 with iron sights (Novak) on my daily carry firearm. Probably 50% of the rounds from the magazine. Rested on sand bags.

I have trouble pulling to the dot. Mostly cuz it’s not natural for ME just not putting in the time, like a Glock. Just not for ME. My old school 1911 stuff is what I bet my life on. Again, an opinion.

I use the iron sights that came with the guns i own this is mainly because when i was in veit-nam i carried the military issue 1911 45acp and it had iron sites well as the way it was going Charlie dropped a bunch of mortar rounds on us and some got very close to me and shapmetal hit me in the hoster and torn into it striking the 1911 45acp pretty well the hoster was useless but the gun only had some scratches but w a s still in perfect condition and later the sites where called in to action when Charlie thought they could over run us. But we showed them what happens when they meet the 45 ACP, not many got to gol home that day. Stay Alert Don’t Get Hurt

I have never seen a press fit sight come off…

I have. TruGlo Tritium Pro sights on M&P9c.

They seemed to install maybe just a hair easier than the cemented OEM sights came out, but started drifting off to the side enough to become obvious over the course of a couple hundred rounds. My research suggested the sight dovetails on (M&P or S&W generally?) are notoriously tight — and variable. That is consistent with my experience in adjusting and replacing the OEM steel M2.0 sights. An aftermarket sight manufacturer can only do so much to account for variation from gun to gun.

The options suggested by @Barry54 are standard remedies for a loose dovetail fit. The penetrating Locktite has worked for me. Another path is to tighten the slide dovetail — avoiding permanent modification to the gun is probably preferable for most folks.

You could probably run over a pistol with iron sights with a light sedan and they wouldn’t be unserviceable.

I have had running-off-the-rails catastrophic failure of MRDS mechanism, friction dovetail, and setscrew dovetail — just from recoil impacts in the low hundreds. All are vulnerable to install failures. All kinds of optical sights are more complex, and should be more vulnerable to failures out of the installer’s control.

There is no mechanical device safe from unexpected failure. Don’t be too cocky.

Good thing I had that Holosun RDS

I’m honestly trying to understand here the advantages people see for a red dot on an everyday carry handgun. They seem slower to acquire for me. People practice at three and five and seven yards. Seems like a groove down the center of the slide would be adequate at those distances. Obviously the secondary sight saved the day and in this instance it was the red dot.

People don’t practice as far as they should IMO, we’ve been over that in other threads on here, but defensive gun uses beyond 7 yards absolutely do happen and are not super rare. Tom Givens sample size of only like 63 goes all the way out to 22 yards with some in the teens of yards also.

The RDS is typically faster and more accurate, that’s why it has to be separated out in competition for example, to avoid the people disadvantaged by the iron sights losing to all the RDS folks.

It is absolutely, objectively superior to have a single focal plane RDS that allows target focus, over having to line up one sight within another while focusing on the one and the other plus target are both blury.

What’s your from-concealment react, draw, 3 A-zone hits time with your EDC gun at 3 yards with irons?

Example. I don’t really find an rds to be slow

Just a single run on video, some are sub 2 seconds for react, draw from concealment, 3 shots with 3 good hits at 5 yards. And I’m not that good either

I don’t have a timer. Of all things, my wife has mentioned getting one…

I’ll have to research a zone dimensions and get back to you.

A timer is essential, IMO, not having a timer is about as useful (especially when talking about how fast something is) as shooting at the backstop without a target to know where the bullets went.

I seem to spend more time looking for the dot when I could be firing if all that junk wasn’t sticking up there in the way.

When starting, think about pointing your support thumb at the target.

For me, drawing and indexing the sights on target, which I was already good at with irons, put the dot right on target and I was faster or equally fast but more accurate with the RDS literally the first time I shot one. to make sure it stayed that way as I put them on different guns etc, I used the support thumb pointing at target thing.

You can also revert to the irons, which are right there and visible, if you want, as there is some advantage for super close semi-sighted fire in that you can sometimes see the front sight in your peripheral view under your line of sight for somewhat-aimed fire (if I am describing that right) moreso than you can an RDS 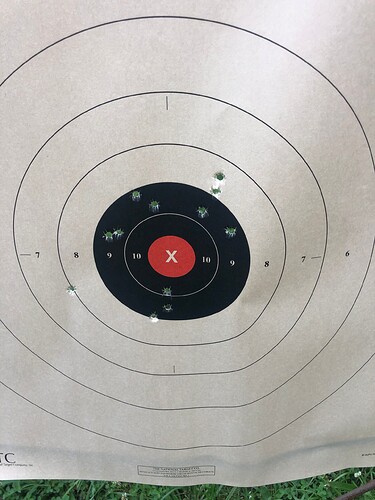 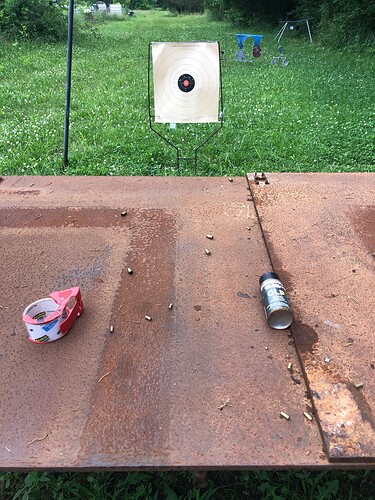 My video was at 5 yards FWIW.

People do miss at 3 yards, and close, all the time. YouTube is full of videos of people missing at 3 feet, let alone 3 yards. If you want good hits, aiming is a good idea. Shot placement is critically important for stopping that attacker ASAP after all.

I think that target you posted would be about 5-7 seconds to reproduce at 10 yards with an RDS equipped pisstol. 3-5 seconds at 5 yards.

The cluster of three at six o’clock was my first attempt and I did remember seeing at least the front sight and maybe sight picture for the first shot. It was mid four seconds. I didn’t screenshot the time.
4.46
3.93
4.13
We’re my next three attempts. Since I don’t have a proper timer, I put the phone on the table. Touched start with my trigger finger. Drew and fired three times and hit stop as fast as I could.

Yeah you’re going to want a shot timer. One of the best expenses you’ll ever have, bang for your buck, and those times will be lower and more representative. You’ll like it