This is getting old, but once again I came across another misleading article claiming that increased gun ownership is responsible for the spike in violent crimes. As responsibly armed citizens, we know that’s utter nonsense. Yet the anti-gun crowd continues to spew their false rhetoric.

In addition to being armed and trained with guns, we as advocates of a responsibly-armed citizenry need to be armed with data. I cannot think of any two graphs more compelling than the two below.

Graph of violent crime since 1960: 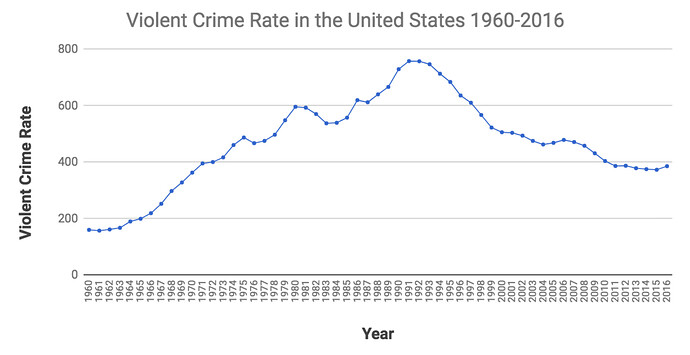 The second graph shows the rate of household gun ownership since 1960.

I see at least two interesting features when I compare these graphs:

The spike in 1994 is interesting as it occurred just after, and likely in reaction to, the spike in violent crime in 1992. Just like 2020-2022, when people are concerned for their physical safety and doubtful about the government’s ability to maintain law and order, they want the means to protect themselves. The data agrees with this assertion.

If, as some claim, rates of household gun ownership were responsible for increasing rates of violent crime, we would expect the trend lines to follow the same trend. They don’t, not even close. Gun ownership spiked up and down throughout the period, ending up slightly lower, whereas violent crime smoothly increased through 1992 then decreased through 2016 ending up much higher, with a few smooth fluctuations in between.

Let me repeat this: The rate of household gun ownership decreased by 7% from 1960 to 2020, while the rate of violent crime increased by around 228% through the same period.

The data simply does not support the notion that more guns create more violence. There must be other social trends, such as the breakdown of the family, increasing secularity, moral relativism, drug abuse, all possibly leading to not only increases in violent crime, but also in the huge increase in mental health issues (my field).

Only when we are armed with facts can we even hope to start identifying the real causes of violence and the decline of law, order, ethics and morality. The media and politicians need to focus on the real causes of the breakdown of society and stop pinning it on convenient scapegoats. We, as responsibly-armed citizens, can point out the facts.

i noticed that the woke Liberals are now cocerned about staying safe and sound,we even had some come on here and ask how to train,it is nice to them to realize they DO need protection because the PERPS do not care who their victims are even if they are liberal,it is nice to see a few have woke up

I seem to notice by the years that violent crimes increased by the drugs that seem to be popular at the time. In the 1980’s it was cocaine and in the 90’s it was meth. In the 1970’s it was Heroin and the leading cause of death amongst people aged 15 to 35 was drug abuse.