You Can't make this stuff up

“Liz Cheney… has been married to lawyer Philip Perry since 1993… according to the bio on the site of his current employer, Latham & Watkins.”

“Speaking of Latham & Watkins, where Perry has worked as of 2007, it turns out that a partner at the firm has represented Hunter Biden since 2020”

But not to worry, you can trust them, they are our trusted leaders.

Liz is on her way out, the good people of Wyoming are pissed.

I sure hope this turns out to be true.

Me too. She was trying to get the dems to switch sides (legal in WY.) and vote Republican so she could stay in power. 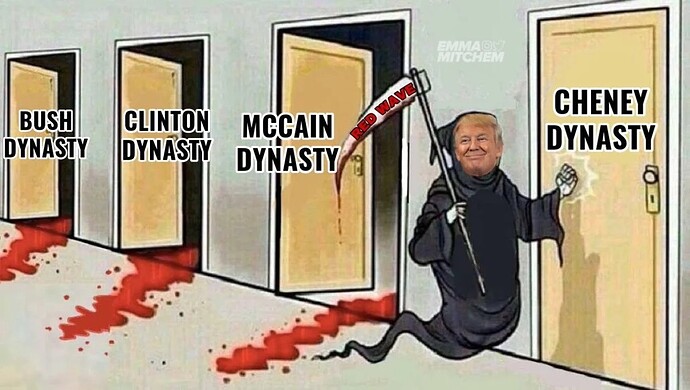 Sorry Liz, nothing that Hubby or Daddy can do about it now. Next up, Liz drops out of the Presidential race due to lack of support.

Number was tough to find, looks like about 2 to 1 , not even close.

And officially becomes a Democrat…

I have maintained for a long time that the cesspool in Washington and probably in many other states, like Kalifornicadia, is composed of an incestuous herd of intertangled families. Too frequently these days when congressman X dies in office wifey manages to ride the sympathy vote into office. I guess some of the voters even think that they are voting for the dead guy. Then we have the father-son tag teams. As a life member of the NRA Bush Sr. was a flop and Bush Jr. was no winner either. While Cheny was apparently a shootist, including his hunting partners, he was one of the elitist gun owners. Guns only for me and not for thee. The Clinton in the wings waiting for a presidency run is married to the son of a power broker who, it has been alleged, has certain questionable affiliations. And, of course, we all know how Clinton “insiders” have a propensity for having “accidents” under perplexing circumstances and also for committing difficult to perform suicides. I feel finding a truly honest politician in capitols any where in the world, not just the US is about as likely as finding a 25 year old virgin in Hollywood. It also amazes me how a mediocre politician like Biden, who having spent his lifetime feeding in the public trough is able to be a millionaire with several exclusive residences one of which the taxpayers are now paying to put an expensive fence around.

It’s beyond frustrating. Like Franklin said, “ a republic, if you can keep it”. I don’t think we’ve kept it. I feel it slipping away right before our eyes. It’s increasingly like Rome just before and after Julius Caesar, a Republic in name only. We hear the criticisms leveled by the elite US oligarchs through the mouths of their incestuous cardboard cutout front men and women in DC of Russia, China, etc. as all the while they advance an anti American Republic agenda that will ultimately destroy our freedoms, our participatory role in self government, and lead us to one party rule at best.