Did the assault weapons ban of 1994 bring down mass shootings? Here's what...

How many dishonest, manipulative points can you spot?

Comments are actually better than the article.

Did the assault weapons ban of 1994 bring down mass shootings? Here’s what the data tells us 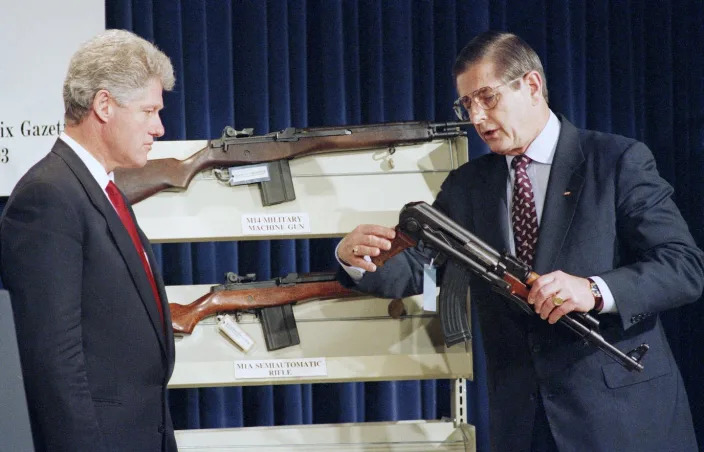 A spate of high-profile mass shootings in the U.S. has sparked calls for Congress to look at imposing a ban on so-called assault weapons – covering the types of guns used in both the recent Buffalo grocery attack and that on an elementary school in Uvalde, Texas.

Such a prohibition has been in place before. As President Joe Biden noted in his June 2, 2022, speech addressing gun violence, almost three decades ago bipartisan support in Congress helped push through a federal assault weapons ban in 1994, as part of the Violent Crime Control and Law Enforcement Act.

That ban was limited – it covered only certain categories of semi-automatic weapons such as AR-15s and applied to a ban on sales only after the act was signed into law, allowing people to keep hold of weapons purchased before that date. And it also had in it a so-called “sunset provision” that allowed the ban to expire in 2004.

Nonetheless, the 10-year life span of that ban – with a clear beginning and end date – gives researchers the opportunity to compare what happened with mass shooting deaths before, during and after the prohibition was in place. Our group of injury epidemiologists and trauma surgeons did just that. In 2019, we published a population-based study analyzing the data in a bid to evaluate the effect that the federal ban on assault weapons had on mass shootings, defined by the FBI as a shooting with four or more fatalities, not including the shooter. Here’s what the data shows:

From 1981 – the earliest year in our analysis – to the rollout of the assault weapons ban in 1994, the proportion of deaths in mass shootings in which an assault rifle was used was lower than it is today.

Yet in this earlier period, mass shooting deaths were steadily rising. Indeed, high-profile mass shootings involving assault rifles – such as the killing of five children in Stockton, California, in 1989 and a 1993 San Francisco office attack that left eight victims dead – provided the impetus behind a push for a prohibition on some types of gun.

In the years after the assault weapons ban went into effect, the number of deaths from mass shootings fell, and the increase in the annual number of incidents slowed down. Even including 1999’s Columbine High School massacre – the deadliest mass shooting during the period of the ban – the 1994 to 2004 period saw lower average annual rates of both mass shootings and deaths resulting from such incidents than before the ban’s inception.

The data shows an almost immediate – and steep – rise in mass shooting deaths in the years after the assault weapons ban expired in 2004.

Breaking the data into absolute numbers, between 2004 and 2017 – the last year of our analysis – the average number of yearly deaths attributed to mass shootings was 25, compared with 5.3 during the 10-year tenure of the ban and 7.2 in the years leading up to the prohibition on assault weapons.

We calculated that the risk of a person in the U.S. dying in a mass shooting was 70% lower during the period in which the assault weapons ban was active. The proportion of overall gun homicides resulting from mass shootings was also down, with nine fewer mass-shooting-related fatalities per 10,000 shooting deaths.

Taking population trends into account, a model we created based on this data suggests that had the federal assault weapons ban been in place throughout the whole period of our study – that is, from 1981 through 2017 – it may have prevented 314 of the 448 mass shooting deaths that occurred during the years in which there was no ban.

And this almost certainly underestimates the total number of lives that could be saved. For our study, we chose only to include mass shooting incidents that were reported and agreed upon by all three of our selected data sources: the Los Angeles Times, Stanford University, and Mother Jones magazine.

Furthermore, for uniformity, we also chose to use the strict federal definition of an assault weapon – which may not include the entire spectrum of what many people may now consider to be assault weapons.

It is also important to note that our analysis cannot definitively say that the assault weapons ban of 1994 caused a decrease in mass shootings, nor that its expiration in 2004 resulted in the growth of deadly incidents in the years since.

Many additional factors may contribute to the shifting frequency of these shootings, such as changes in domestic violence rates, political extremism, psychiatric illness, firearm availability and a surge in sales, and the recent rise in hate groups.

Nonetheless, according to our study, President Biden’s claim that the rate of mass shootings during the period of the assault weapons ban “went down” only for it to rise again after the law was allowed to expire in 2004 holds true.

As the U.S. looks toward a solution to the country’s epidemic of mass shootings, it is difficult to say conclusively that reinstating the assault weapons ban would have a profound impact, especially given the growth in sales in the 18 years in which Americans have been allowed to purchase and stockpile such weapons. But given that many of the high-profile mass shooters in recent years purchased their weapons less than one year before committing their acts, the evidence suggests that it might.

This article is republished from The Conversation, a nonprofit news site dedicated to sharing ideas from academic experts. It was written by: Michael J. Klein, New York University.

Breaking the data into absolute numbers, between 2004 and 2017 – the last year of our analysis – the average number of yearly deaths attributed to mass shootings was 25,

Let’s all just sit back and ponder this part for a bit.

And that’s with ALL types of firearms, including the worst one of all those, in that timespan as it happens, in which two handguns were used.

25 a year, average, ALL types of firearms.

As a random comparison

Child Drownings in U.S. Pools, Spas Are on the Rise

US News is a recognized leader in college, grad school, hospital, mutual fund, and car rankings. Track elected officials, research health conditions, and find news you can use in politics, business, health, and education.

"On average, there were about 400 reported pool/spa drowning deaths among children younger than age 15 each year from 2016 through 2018, according to new CPSC data.

Three-quarters of those deaths involved children younger than 5, and 83% of those occurred in residential pools.

Child drownings remain the leading cause of unintentional death among U.S. children ages 1 to 4, according to the CPSC."

And that 25 a year average includes a large number of adults for the shootings, especially since the worst one was all handguns and at a college with adult victims.

Accorfing to FBI data, approximately 900 people were killed in active shooter events between 2000 and 2018. Those numbers pale in comparison to the 190,455 deaths caused by drunk drivers between just 2006 and 2012! Additionally, more than 197,000 people died as the result of speeding since 2000 and close to 78,000 people have died in crashes caused by distracted driving since 2000, according to a study by the American Public Health Association and NHTSA data. Are we going to revoke my driving privileges because my neighbors drove under the influence or while on their phone? Since 2000, more Amercians have died in car accidents than in both world wars! I know, everyone will say it’s a rediculous comparison but is it really? If this is about deaths then dead is dead and if I’m killed by a drunk driver or someones gun matters not to my family, I’m equally dead either way.

Because we failed at everything else so let’s do news…

How Yahoo Missed Out on Hundreds of Billions, Again and Again

From giant to failure in 4 failed deals

ROFLMAO, guess the comments correcting the article and that did not fit their narrative needed to be taken down:

They don’t learn. Like starting a poll and not getting the desired results.

Yahoo isn’t even close to making my Top 100 list of credible sources for interpreting ANYTHING.