Both were right and wrong.
Sometimes cooperation, understanding, patience and thinking ahead would make such situations easier to manage.

Hard to get the final verdict if I don’t know exact rights for both in this particular case.

Everything went wrong in this situation IMHO. Both parties the officers and the person being stopped had a problem communicating. The driver of the vehicle stating he was a paraplegic but that can be a lie just not to step out of the car. Did the vehicle have invalid plates. I didn’t notice any special gadgets to show it was a handicapped vehicle. There was to much raising of voices, to much screaming and yelling. The officer had the right to pull him for the tinted windows but upon checking his name in the system it comes back as the driver of the vehicle has prior drug and gun possession conviction. Not to say a paraplegic can’t deal drugs or have a firearm. The officers should have tried a little harder to verify his story and also call for a supervisor like the man requested and maybe the situation wouldn’t have gone south like it did. When the man was on his cell calling someone, that is if he did call someone, he’s asking the person on the other line to bring cell phones to record what’s going on but never asked the person to bring his wheelchair. I don’t even believe the officers asked him if he had a wheelchair in the trunk which could’ve settled the part of him getting out of the car, they could’ve assisted him onto the wheelchair. And what about the other officer who wasn’t communicating with the driver, he should’ve stopped his partner from dragging the man out of the car and he also should’ve called for a supervisor. So many reasons on both sides why this situation was handled improperly by both parties. I’m sure I may have missed other details but I just wanted to name a few. Both parties were wrong.

This happens too often… the “chiefs” and investigations cover for such officers. And then there are those who will defend the police no matter what they do. In this video the police are absolutely deaf and show NO regard for the man’s disability-- regardless of the offense.

They actually do what they suppose to do, but keeping themselves safe. Most of such situations are created by stopped drivers who, unfortunately rarely comply.

I’m not going to excuse LEO in this particular case, he also did it wrong, but he probably already heard a lot of BS from drivers, crazy excuses, stupid explanations - anything to not be taking out from vehicle and eventually arrested.

Lacking all the details…
Ok!
IMO there is enough blame to go around. The LEO measures the tint and apparently it is too dark. The driver argues the percentage. The LEO runs a check on the driver and he has drug and weapons violations. The driver maintains a defensive behavior and refuses assistance to exit the car. The LEO becomes agitated and insistent which causes the driver to become less cooperative and demand a supervisor.

The LEO is in a bad spot! He is confronted with an individual in a vehicle with reduced visibility who has drug and weapons violations!

First… I never excused the driver but nothing he did was illegal. He was paralyzed.

Second… It was a traffic stop, the officer(s) over-reacted. They are supposed to be highly trained.

And my biggest peeve… I’m more interested in civilian safety. Like me- almost 40 years ago- they understood (or should have) the challenges and dangers of the job. These officers were wrong!

Finally, we have rights and just because an officer knows nothing of them or doesn’t care about them is his and his departments future lawsuit.

I thought I would put this out there to see what response would come from it.

I myself agree with all the responses to a point, I believe it could have went better in a different way but because of his background or previous convictions, I believe some LEO’s think that once convinced you know long have rights. I say this because if he did not have previous convictions would he have been told to get out of the car? And even so is it necessary to grab someone by the hair? Believe me I understand the danger LEO’s might face on the job. ( I wanted to be one and just now gave up about a year ago when the chief of police here told me in a text or e-mail, he would hire me but he does not know me personally ).

I would be glad, no pleased if we on earth realize we are all human beings and every life matters. This game of cops and rubbers need to end. Only if I knew how to help with ending all the shameful things we see, hear about or experience ourselves.

Mebby it’s just me and I’m old(er) but I figure if the police stopped me it’s for a reason (especially now a’ days with COVID, ambushes, etc)

What is so damn hard about being polite until you figure out why you were stopped?

Do I have a possible guess? Mebby if I was doing something stupid.

When did it become OK to be instantaneously confrontational with a LEO?

If you have already been oppositional with LEO do you think he/she’s going to believe you when you say your a paraplegic and “forgot your wheelchair at home”?

Add to it you have prior weapons and drug charges?

Stupid behavior is not illegal but being belligerent, confrontational and aggressive towards a LEO is a sure fire way to make your situation much worse than it needed to be.

First… I never excused the driver but nothing he did was illegal.

Since this reply was made to me I’ll reply to you.

Both of your posts go directly against the LEO and at least two levels up the chain of command.

The by omission and innuendo, you absolve the driver and impugn law enforcement.

The LEO was overly aggressive. However the driver unnecessarily escalated confrontation beyond a pleasant conversation.

We don’t know at this point how handicapped he was or if there were other motives for refusing to leave his vehicle to allow the dog search.

There is a lot of this story to still play out!

Only if I knew how to help with ending all the shameful things we see, hear about or experience ourselves.

I agree with you the problem is huge. The body cameras will go a long way toward shining a light on LEO behavior, good or bad.

In this case if the driver had not started out questioning the “tint” on his windows there may have been one less step down the wrong road.

I learned when I was in my teens, “yes sir/officer - no sir/officer” were the responses to police through the window of a car.

If you have a beef, take the ticket and fight it out in court.

I am not against LEOs. In this case-- my opinion is the officers were overly aggressive and could have de-escalated and verify his claim of being paralyzed and responded in a much more professional manner. The driver is under no obligation to help the police in their investigation nor is he under any obligation to treat them with kid gloves or have “pleasant talk” with them. None-the-less he still has his rights.

When I encounter the police— probably 3 times in the last 5 years I do not have small talk… I am reasonably respectful (unless they fail to show respect) If they get snitty all bets are off. I demand a card and WILL file a complaint.

We talk a lot on this site about talking to police in a self-defense situation-- small talk and pleasantries can get you thrown in jail for years, the same applies to “minor” offenses.

And my biggest peeve

The problem with body cams is that most jurisdictions will not give you the recordings without an expensive court order.

Its a tough situation when one doesn’t have all the facts… gonna be interest to hear the “rest of the story” as Paul Harvey used to say.

The LEO appears to be doing what is supposed to be done. The driver did what he should do by responding to the LEO’s request for ID and so on, until the LEO advised him about the car’s tinted windows. But when the driver’s record came up showing past drug and weapons possession conviction, well, the LEO has to do further investigation, a “pat down” if you will, for the safety of both parties. There are other LEOs on scene to assist. When the driver was asked to step out of the car, understandably, the LEO is told by the driver that he can’t cause of his disability. The driver was offered assistance by the LEOs, and, he refused. Unfortunately, things went south. LEO body camera shows all. Why didn’t the driver simply cooperate with LEO? IF THERES’S NOTHING TO HIDE, let LEO do their JOB, for SAFETY, a simple pat down, come out clean, and, just get cited for the window tint. LEO offered assistance to the disabled driver, WAS ALSO GIVEN A CHOICE to get out of car ASSISTEDLY, OR, GET DRAGGED OUT (ASSISTEDLY). Not cooperating, refusing, showing attitude won’t get anyone anywhere. Unfortunately for the ordeal that the disabled driver went thru, hopefully everything will turn out okay for him with the ongoing investigation. HOWEVER, there’s been situations where cases of LEOs were justified with no actions taken, JUST SAYING.

…the “chiefs” and investigations cover for such officers.

Sometimes that is true. I think it’s more common that an individual officer is considered expendable by the department and public officials.

Clear signs of actual or potential trouble are ignored or even encouraged in a unit, until some bad act blows up in the public eye. Then command is just astonished that such a thing could occur in their department — after all of the excellent leadership which has been provided, now this. So throw the officer under the bus, plus anyone close enough to show tarnish. And take a few swings at the union for demanding due process. Heroic bosses have tidied up another mess and another miscreant is banished. Everything is solved — except the town still has a festering crap pile heading for the next misadventure.

Even a crappy cop on a better department would have a better outcome, or not be in position to mess this dance up. I saw plenty of regard for the uncooperative motorist’s disabilities — just a lack of suitable skills to avoid or maneuver out of this contrived standoff. So the crappy cop will pay, but the person who built the crappy cop leads on. 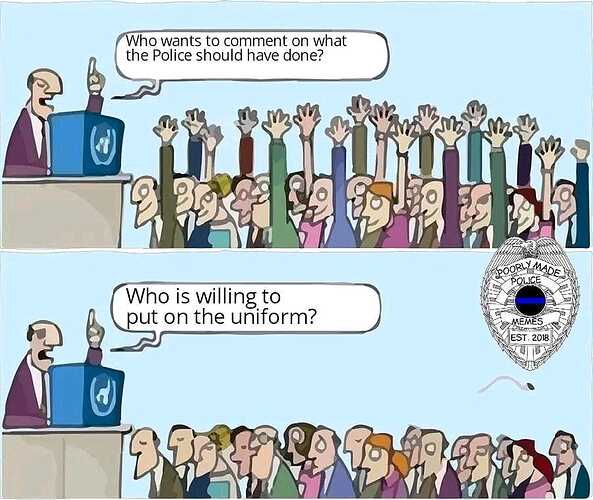 Too many raise their hands who shouldn’t. Ending racial and gender quotas would go a long way to solve the problem.