…Owen’s commune (19th century), some modern farming communes in Israel…Sweden…Is this the progress you offer? No, thanks.

I’m not sure any of those qualify as “socialist support for 2A withdrawn once in power” — maybe I’m missing your shift in debate topic.

Examples of socialism in the United States of America is easy (haven’t we done this before…?):

You don’t have to like all of them, but they are all formed from socialist principles. Ayn Rand and her ilk would not suffer anyone to get any of that crap except by physical force or economic coercion. Regardless, they are all-American practices, promoting prosperity, preserving all-American freedom and social solidarity in the 20th-21st Century.

I don’t believe any of them bear directly on 2A or Stalinism.

By your logic, any tax-supported institution is … socialist! Such as the Military, Police, Courts, Prisons, the CIA and so on! So is every bank with a retail division. So is every charity.

No, this is not conventional understanding of what socialism is. Please quit muddling the water. I will agree with you that Social Security is socialist. It was created by FDR, whose socialism was rebuked by Justice Brendeis. But the main indicator, if you attempted to replicate Social Security operation privately, the SEC would ask the FBI to lock you up in a slammer (according to you the latter 3 are socialist institutions) for a Ponzi Scheme.

and I just noticed this gem! My rule of survival - if you notice any people’s liberation, any workers’ solidarity, any one people-one nation-one fuhrer around you - ruuuunnnn!!!

By your logic, any tax-supported institution is … socialist! Such as the Military, Police, Courts, Prisons, the CIA and so on! So is every bank with a retail division. So is every charity.

You’re right, I forgot a few, didn’t I? I don’t know about the banks — how does that play? And charities I believe are private institutions of compassion. But their tax-exempt status and tax deductions for donations, yeah, I guess that’s pretty socialist.

No, this is not conventional understanding of what socialism is. Please quit muddling the water.

You mean that it’s not your understanding.

"it turns out, NRA goons stand guard at the door of every gun store, and every range."

since when??? I haven’t seen any such anywhere… and I must add have NEVER seen such…

so this is news to me…

please explain… or please retract… proof of such is… IMHO… required…

I didnt see them either LOL. There is a user who implied NRA blocks minorities from 2A. I am just trying to imagine how NRA could do this… It must be goons. Invisible ones.

You mean that it’s not your understanding.

What do you mean - mine? Socialism requires that workers own means of production (tool, factories, livestock, farms, etc). Socialist is the person who subscribes to this crap and makes it his goal. I dont know what definition of socialism you are trying to sell, I already bought one from Karl Marx himself.
A little less clear is what happens with the reactionary capitalist who built the factory and doesnt want to give it up, and his family. What happens to farmers-kulaks. What cut will the likes of Fidel and inner party members get (you know, the guys with firepower).

it turns out, NRA goons stand guard at the door of every gun store, and every range. They ask your race, sexual orientation and vaccine passport. and block you from exercising your 2A rights unless you are from the patriarchy.

Excuse me??? Not any of the fine gun stores I’ve visited here in Wisconsin.

Note to self - gotta work on my sarcasms

I dont know what definition of socialism you are trying to sell, I already bought one from Karl Marx himself.

Oh, yeah. Karl — late to the game and early to leave.

I was thinking of The Plantation Covenant of Guilford, Connecticut, 1639.
Or maybe Acts 4:32–35. Or the significant body of earlier and subsequent thinking on socialist concepts — all long before Karl showed up.

Karl Marx adapted socialist philosophy from prior works; which begat the Soviet Union; which begat Stalinism; which begat hideous abominations — which led to considerable confusion about what is socialism — which lasted in much of the world into the mid- to late-20th Century. The confusion persists in some corners to this day, where the confusion is a handy tool of autocrats and enablers of all political stripes and labels to gain or maintain authority.

Y’know, in my earlier list of American socialist programs, I somehow forgot to mention things like the graduated income tax, the standard deduction from that tax, Donald Trump’s Paycheck Protection Program, supplemental unemployment benefits, and of course the DJT vanity checks: 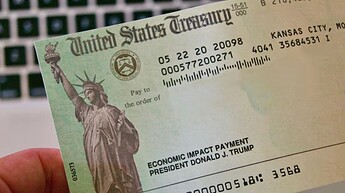 Because the Democrats politicized the RKBA since before the Dred Scott decision that openly cited one reason for that decision was that it would allow freed blacks to own firearms.

You are a racist. Read about California in the 1960s - the real history. “Wild Bois”? A new term? You mean the Proud Boys? Of course you do not want to name that group as their leader is a black Cuban-American, making the claim about it being a “white supremacist” organization completely invalid. You wear your badge of Socialist as an honor - it is anti-American. You can make whatever claim you want about your not being a “real” Socialist, but your words prove what you are. That is wholly apart from your RKBA - we all have that right, regardless of political beliefs - regardless of Democrats seeking to abolish that right, as they have for over 150 years, since before the Dred Scott decision.

The conversation is turning into gaslighting and demagoguery. If someone says “I am a Progressive Liberal”, am I supposed to think they are like Voltaire? LOL! If you invented a new kind of Socialism, totally different from Karl Marx’ variant - congratulations! But please dont experiment with it in America. Maybe some former Soviet republic will agree to test your theories on themselves.

A NATIONAL SOCIALIST is like the National Socialist Party begun by Hitler, called the NAZI Party.

Hmm… does it mean Socialist Party of America was the same?

Joe McCarthy is coming for you, man!

WOW… I’ve just been introduced to a new person in US history.

…the Democrats politicized the RKBA since before the Dred Scott decision…

Back when Democrats held Republican Party values, and Republicans held Democratic Party values? A lot has changed since the mid-19th century. Hard to keep up, eh?

You are a racist.

I do not pretend that race, religion, and other mutable and immutable human characteristics are not affecting society in positive and negative ways, if that’s what you mean by calling me a racist.

I refer to the Black Panthers as a generic reference to African-Americans, armed and organized, scaring a certain category of white folks — then, now, and in the 19th Century.

I refer to the Wild Bois as a generic reference to a certain category of white folks, armed and organized, scaring a lot of civilized people of many flavors and values. The name I invented was certainly intended to include Proud Boys, plus the broad array of organized and unorganized accelerationists who would prefer to style themselves as “patriots” as they attempt to destroy the institutions and principles of America.

If you don’t see the parallels between those two images — positive or negative — I don’t think you have qualified yourself to decide who is a racist.

…a new person in US history.

It’s an instructional period. There are a lot of lessons about the damage which can be inflicted by claiming that an idea is what it is not.

Did not directly affect my family as far as I know, but I had school friends whose parents suffered collateral damage from the hunt for Joe’s fantasy “red menace”. Meanwhile, there were of course real threats afoot in the world. Similar to the distractions of “Q”, I suppose.

Black Panthers as a generic reference to African-Americans, armed and organized, scaring a certain category of white folks

They did far more than “scare the white folks”. I can’t teach what you are unwilling to learn, as you claim to have been there, you know they were not, just like Antifa and BLM, peaceful protesters. They were more like the Arab terrorist organizations, doing some good in the community to get people to back them. But I guess beating police, involved in assorted criminal activities is just fun and games. They were not bad people…

the Wild Bois as a generic reference to a certain category of white folks, armed and organized, scaring a lot of civilized people of many flavors and values.

LOL, you like twisting words and meanings to suit your beliefs. You must be quite limber. So, the Proud Boys, led by a black Cuban-American, are a category of “white folk”? Interesting.

I don’t think you have qualified yourself to decide who is a racist.

Well, I certainly do not believe a black man is a white supremacist, but you apparently do.

You didnt know about McCarthy? It is basically about Cancel Culture and Russia Collusion, but in the 1950s. Nothing is new under the Moon.