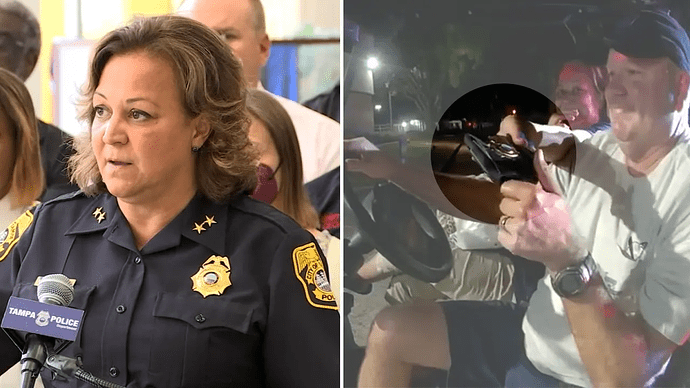 Tampa's police chief was placed on administrative leave after a body camera video showed her flashing her badge to a deputy during a traffic stop.

What would you call this officers’ instant reaction to the stop, given this day of instant on bodycams, always on dashcams, etc.? And should the Tampa Police Chief get a pass?

HERE’S IS THE UPDATE:

Can’t tell what you are asking about, but based on the text description in the title, kind of sounds like SOP

Why the “Helping Hand” must always correct others’ mistakes?

Tampa's police chief was placed on administrative leave after a body camera video showed her flashing her badge to a deputy during a traffic stop.

Seems fair to me, as long as it works for everyone. I can’t wait to get my badge in the mail!

Why, do you think, one would flash their badge of authority, when it’s them that are caught being the subject of an infraction of either ordinance or law, and while being outside of their jurisdictional authority? What would motive one to do such a thing?

I think that if it is okay (they let her go…and left them driving an unregistered/uninsured vehicle on public roads) for them…it should be okay for everyone.

Really, I just want a badge and an old cap gun!

What could one suspect would have occurred if there were no dash or body cams to capture footage of the event, would it have really happened? Would it have been provable?

I know…you just really want the junior G-Man badge in mail or box of cereal, I got it. lol.

Here’s an aside: What if an LE showed up at a funeral in another state with full dress uniform with a loaded firearm plainly displayed and no other LE in the area knew of their presence and authorization to do such, what perception would the general public have? I guess it would take an LEO to answer this one, but doesn’t it wreak of possible intimidation, or the lending of a false impression to the unknowing or uninitiated? So, what, if any, would be the difference between these two scenarios?

The same way an LEO can use professional courtesy with another LEO he can use their discretion with civilian. I always used discretion because you don’t have to ticket everyone you come in contact with. Most importantly treat people with dignity and respect.

I have to agree with Johnnyq on this one. Yes, it’s a professional courtesy. At least 80% of the people ( without a badge) that I stopped got a break. So? Prior to being a a LEO I was stopped around 26 times. That’s a pretty accurate number, I use to keep track. I received 2 tickets, one for careless driving, well deserved, and one for a license plate light instead of a moving violation. Just to let you know I didn’t look anything like a cop back then. I’m also going to say I always treated the officer with respect same as I treat everyone else. Kinda simple to me. I’ve been retired 20 years this year. If a LEO needed help I’d still jump in. Oh yeah, by the way, I had to arrest 2 officers during my career. Enough said……

her actions were a result of “poor judgment” to have been driving on a public road without appropriate tags. She said she realized her handling of it could be viewed as inappropriate.

Could be viewed as inappropriate??? I believe she meant to state her actions - knowingly driving, well her husband doing so, an unlicensed vehicle and requesting to be let-off due to her being an officer - are at the very least “inappropriate”.

David, I know we are in different times than when I worked but we routinely went to out of state funerals. I never had a problem there. I am currently an elected Peace Officer ( Constable ) and no one has indicated nor have I been told that my presence has troubled them. Funny, I have found it to be just the opposite. They have engaged with me in conversations over every possible subject. The area is very rural but the conversations have been about politics, cars, flying, animals, military, you name it. Honestly I’ve rarely had any problems with people both in my city employment and here in the woods.

Thank you for your perspective. In fact, I thank all who have chimed in on this thread to the degree that you have. So, there’s that.

I also have to admit, continually, I might add, my own ineptitude when it comes to Police Science, and all that may pertain to mindset and development. All of my personal interactions with LE have been positive, polite, cordial, dutiful, respectful. Well, there was that one incident in Detroit Lakes, MN, but I consider that encounter a clear anomaly.

But as an observer of LE even as with this report, I find something refreshing, something noble, while at the same time, something expected. Now, there are nuts and bolts that I won’t attempt at raising suspicion toward or get in to, but ultimately, I see accountability, integrity, and respect for the profession and badge that represents that profession at work here.

We live in a time where it seems no one wants to be held accountable for anything. Everything is contestable, no matter their actions, but not so, here. As I said, there are a lot of nuts and bolts, I’m sure, that we are not privy to, but ultimately it won my respect. Not that someone was disciplined, but the fact that accountability and integrity won the day.

That’s not the type of flashing that gets women out of a speeding ticket.

Here’s today’s update on this situation: Again, Accountability and Integrity at Work.

My only hope is that this type of resultant action is consistent and not isolated, otherwise this would be very sad. This is a standard that future office holders should seek to emulate and truly realize that they work and represent all of the people and are accountable to them for their actions, opposed to believing they are entities unto themselves, and are accountable to no one.