Taken from an NRA sent email

I’m afraid I don’t understand your reply. I was challenging the “millions of new gun purchasers” that most gun sites talk about. I want to know who did the counting or is it just a W.A.G?

Right now I am reading a biography about the Japanese emperor who modernized Japan. Emperor Meiji or Mutsuhito. I don’t understand what you mean by “Free China” or “Free North Korea”. The Manchu Dynasty stretched back 300 years from the early days of the 20th century. That said, for the last 200 years while China was theoretically an independent country, western powers, England, France, Germany, the U.S., Russia and Japan all made demands upon the government and enforced those demands at the point of a bayonet and the barrel of a cannon. And while I have mostly only studied 20th century Chinese history, it is my understanding that the Manchu Dynasty was imposed by force of arms on the Chinese folk who were already in country.

As for North Korea, there was no such thing. the Korean peninsula had three “kingdoms”. Each was little more than a feudal barony. All three paid taxes to the Manchu dynasty and before that to whatever dynasty preceded it. North Korea only came about after WWII when the US and Russia divided up the country at the 38th parallel. Both North and South Korea were ruled by dictators Sygman Rhee (that is not the correct spelling of his first name) was as much a dictator as the grandfather of the present nut job in control of North Korea. It was only when Korea started to gain status as a manufacturer of quality goods that any kind of democracy was achieved.

Before WWII, starting in the 19th century, Japan “annexed” all of Korea as a satellite state and ran the country to suit themselves. They compelled the “king” to abdicate upon assuming command of Korea.

If the NRA ever stops sending out pleas for money the post office will have to lay off ten percent of its work force.

Of course, if WLP wasn’t buying bespoke suits, going on African safaris, and having a pied a terre built on membership fees, perhaps they wouldn’t need to be constantly begging for money.

perhaps if you read your reply to my comment you’ll figure it out. If not, no worries, on this end anyways.

I didn’t clarify very well…I was thinking of the China of a few centuries ago…my bad.

this SEEMS to be an issue??? 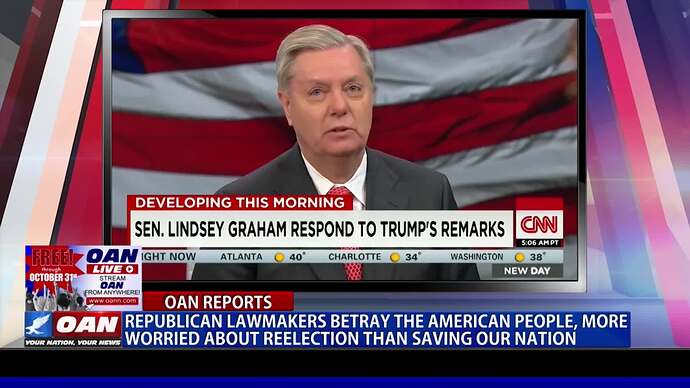 For too long, RINOs have made empty promises to fight the Democrats with fundraising and campaigning and doing absolutely nothing to protect our country or our freedoms. One America's Pearson Sharp ha

The term “RINO” (Republicans In Name Only) implies that there are fake Republicans, who are somehow different than “true” Republicans. True Republicans apparently don’t care about things like raising money and winning elections. Did a Republican say something you didn’t like? Oh, that person is a RINO, they aren’t pure as the wind-driven snow, like real Republicans.

I don’t know who invented the term, but it might be one of the most brilliant marketing scams that any political party has ever developed.

RINOs are those that are elected as Republicans, but align themselves more with the Democratic agenda than with the Republican ideology.

I don’t really care. Politicians are politicians. You can paint a turd red or blue, it’s still brown on the inside.

RINO is no longer a useful term, because, as pointed out above, many have taken to calling any Republican who says or does even just one thing they disagree with a RINO. That is just not helpful.
However, many years ago I determined that many of the long-term, establishment Republicans are the Washington Generals of politics, putting on a good show of opposing the Democrats, while going home each day with an acceptable payoff, never actually worrying about winning.
Some years after I started using this WG analogy, I heard Rush use it on one of his broadcasts.

That is just not helpful.

I think or say that nearly every time a human opens their mouth these days. How far we’ve fallen.

why do I need to send you money to do the job you were ELECTED to do???

I believe it does matter and there are differences. If not, then California would be just like every other state, and categorizing states as “Red” or “Blue” would have no meaning. Obviously anyone that believes in their RKBA would not willingly move to California.

There are policy differences, but I think the better distinction is made between individual politicians. It’s the fault of the electorate that we don’t pay attention at this level, voting in the best people and removing them when they no longer represent us.

But I don’t owe allegiance to any political party, and I think the reason each of the two major parties exist is exactly the same: to consolidate money and power. Otherwise, each politician would simply run as an independent. An individual politician might run for all the right reasons (although most of them don’t), but the parties as entities no longer exist to oppose the federal bank or abolish slavery, they exist to raise money and campaign. That’s why I think “RINO” is a silly term. Who gets to decide what a “Republican” is? They’re all just politicians. If you’re lucky, you’ll find one who votes your way once in awhile.

@Craig_AR I love the Washington Generals analogy. Especially when I think of all the times the Republicans have been standing mid-court while someone pulled their shorts down.

There are consistent, reliable differences in RKBA arms laws which correlate to a state’s current and historical politics

Fellow Ct resident here. They have destroyed our once great state.

Yeah, they have. Love my town, though, makes it hard to believe we have who we have in power. .rt. 8 corrider still quite red.
Eternal optimist, waiting on November, but road trip in the motorhome after Labor Day, looking at a possible real estate acquisition in a freer state. I’ve sort of focused on a certain area of TN, but the fact much of the land is in HOA developments raises some questions. Funny seeing the HOA properties are about half the price of the non HOA properties per acre however.

Who gets to decide what a “Republican” is?

We do - based on the party’s ideology.

I didn’t realize you ran the party.

Do I ever have questions for you!